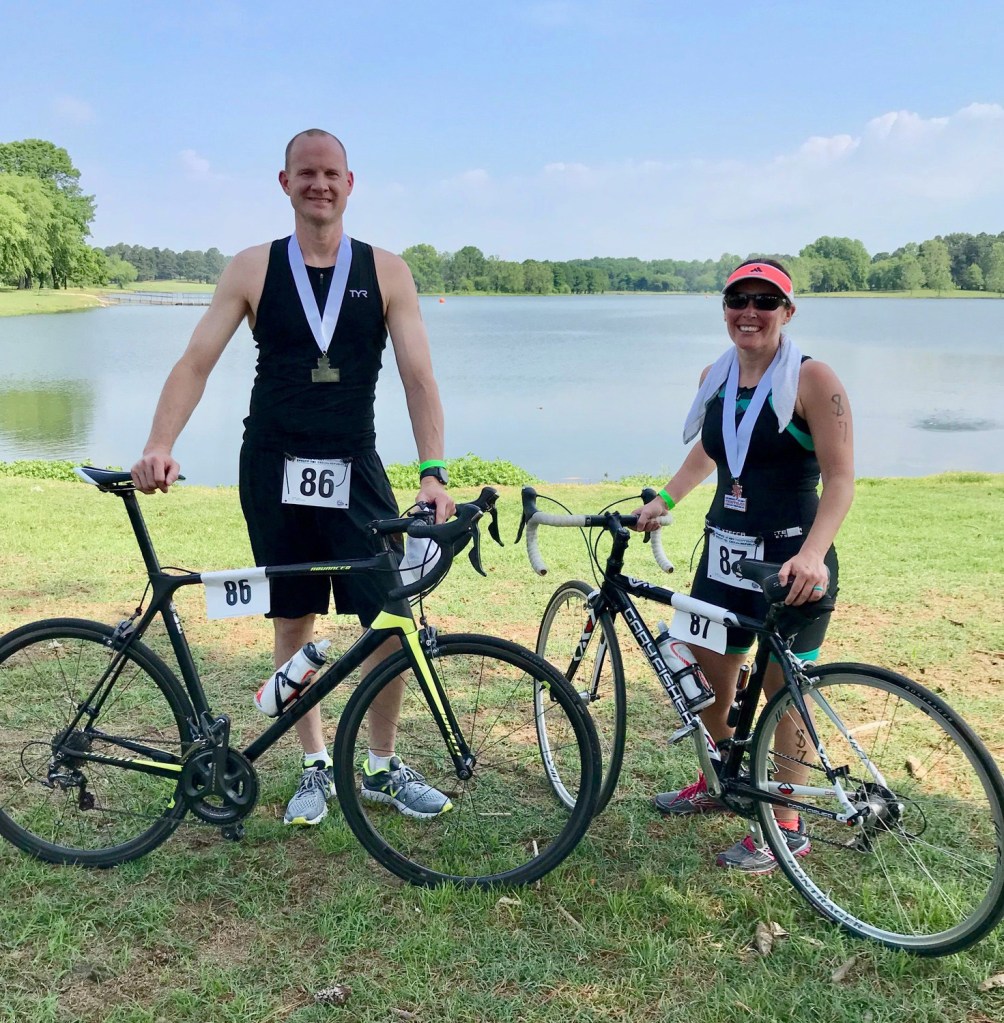 Kentucky Today Mayfield First Baptist Church Pastor Wes Fowler, left, and his wife, Tara, pose for a photo before the start of a triathlon they competed in. The Fowlers are among a growing number of church leaders who are setting good examples in the area of physical health.

MAYFIELD — With a new-found passion for competing in triathlons, Pastor Wes Fowler is enjoying his best physical condition since college.

At 6 feet 5 inches tall and 183 pounds, his body mass index is near perfect for a 41-year-old, as are his blood pressure readings, cholesterol level, heart rate, and every other measurement of physical health, thanks to a challenging regimen of running, cycling and swimming.

As senior pastor of First Baptist Church in Mayfield, more than 350 people have watched from Sunday to Sunday as Fowler shed 40 pounds over the past year.

“People were concerned for my health as the weight started coming off,” Fowler said. “They’d come up to me as ask if I am OK. They’d tell me that I look sick. They weren’t being rude. They were genuinely worried about me, even though I am healthier than I’ve ever been.”

It’s a common response, one that Kenny Rager, pastor of Life Community Church in Owensboro, is quite familiar with.

“The idea of being thin in our culture is so foreign,” said Rager, who has dropped 40 pounds since February and now weighs in at 186 pounds. “The general thinking is you have to be sick to lose weight. People I haven’t seen in a while will typically ask if I’m OK.”

In a nation where obesity has become epidemic, pastors are increasingly trying to be good examples for their flocks in hopes of leading them to healthier lifestyles that include exercise and proper diets. It’s a trend that Kentucky Baptist Convention Executive Director Paul Chitwood believes could pay spiritual dividends by producing more energetic Christians.

“It’s difficult for people to be their best for Christ if they don’t have the energy to get out and share the gospel,” Chitwood said.

A recent Harvard University study found that about two out of three U.S. adults are overweight and one out of three is obese. Even more alarming, the study found an expanding number of obese children and adolescents, putting them at risk of serious health issues, including diabetes. And that is motivating pastors to take seriously their responsibility to set the proper example by caring for their own physical health.

Fowler and his wife Tara, who has dropped 25 pounds, both say their energy levels have skyrocketed since the weight came off.

“That’s important, because, when I feel better, I can be a better wife, a better mom, a better person all the way around,” Tara said.

Jeremy Atwood, pastor at Glasgow’s Immanuel Baptist Church, said health-conscious pastors can have a tremendously positive impact on people in their churches.

Having lost more than 200 pounds, Atwood said he found himself being physically transformed week by week right before his congregation’s eyes.

“You get questions,” he said. “In my case, it was more a matter of intrigue than concern.”

Those questions, he said, have opened the door for him to share what he has learned about proper diet and weight loss.

“In our culture, we’ve become so accustomed to living with the weight of sin that when someone truly tries to live a godly, holy life, people look at them and say ‘what’s wrong with you,’” he said. “In the same way, Americans have become so accustomed to carrying extra weight that when they lose it, we’re inclined to think something is wrong with them.”

When parents and children disagree