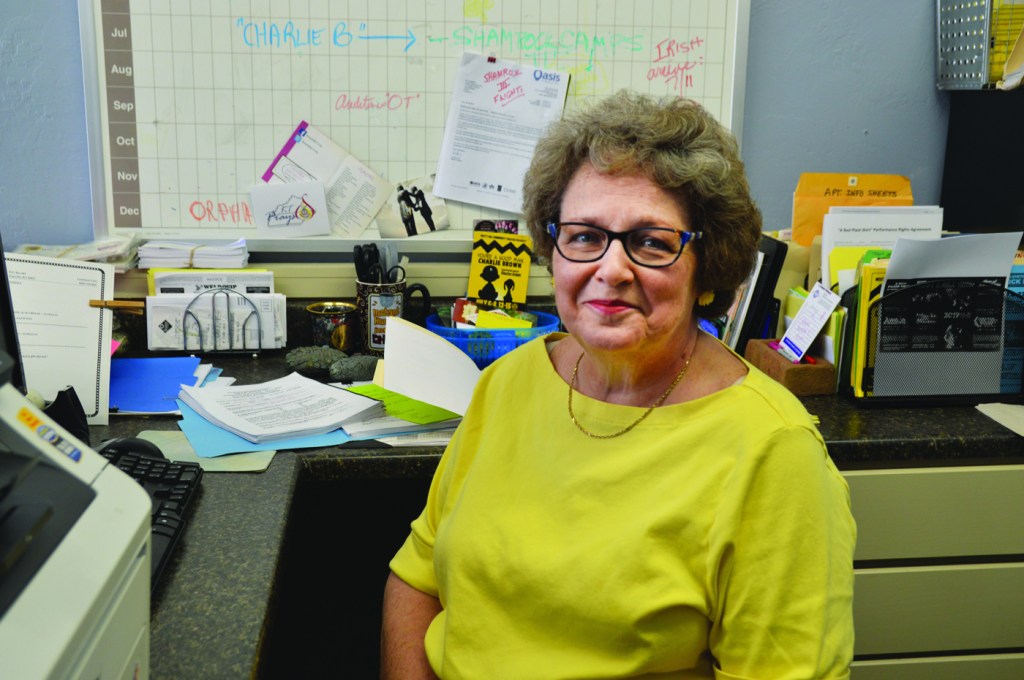 Bobbie Curd/bcurd@amnews.com Karen Logue, West T. Hill Community Theatre's managing director, works from her office at West's Wing. Coordinating a new season, which includes lining up dates and directors, as well as getting the logistics in order for the theater's summer camp are just part of her job at the helm. "I love what I do," Logue says, smiling.

Thursday afternoon, the managing director of West T. Hill Community Theatre took some time out of her office work at West’s Wing to discuss the upcoming season, which hits the stage in September. Karen Logue sat behind her desk, covered in folders, papers and sticky notes, reminding her of tasks in need of completion.

“We’re excited about this new season, but first we have to successfully get through camp,” Logue says, a huge smile spreading across her face. The smile is due to the camp’s number of participants this year — topping out at 122 kids. Shamrock III starts July 16, and the Irish instructors from UpLift, out of Carrickfergus, Northern Ireland, once again return to put their unique and talented spin on the camp, Logue says.

“They’re just incredibly popular here, and keep coming back year after year,” Logue says. So much so, that on Friday, July 13, a Shamrock III meet and greet will be held at the Community Arts Center, allowing the community to meet the instructors from Danville’s sister city. Logue says the community has always been so amazing at welcoming the crew from UpLift, they thought this would be a great way to invite everyone out at once.

In its 30th season, WTH is also learning to deal with paying the state’s recently expanded sales tax, which is affecting charities and nonprofits — the first time those organizations have ever been required to pay sales tax in Kentucky.

“We’ve had to add 72 cents to our tickets, which doesn’t seem like a lot …” she says, but repeats the sentiment many nonprofits have relayed locally about having to set up new bookkeeping procedures in order to keep track of the tax.

But on to the new season, Logue says.

A new comedy Logue says is timely and “right on point,” about retirement, love, marriage and relationships. She calls it a “laugh-out-loud but poignant character study” of aging and all that goes along with it.

Logue says the theater gets lots of scripts sent to them by various playwrights for consideration. “This was just sent to us, by this Canadian playwright, Michael G. Wilmot, who has written for several TV shows. I read it one day in the office, and literally laughed out loud, it’s that funny.” Roles will be up for two men and two women, with auditions July 15-16. Steve Sleeper will be the director.

A classic musical by Meehand, Strouse and Charnin, this production was last on WTH’s stage 15 years ago. All roles will be filled by young actors, and Logue will direct the musical herself.

“It’s a fun show that includes all the wonderful characters from Miss Hannigan to Rooster and Lily, to all the orphans and Warbucks’ staff,” Logue says. “They all join in this endearing story with Christmas scenes and heart-tugging songs.” She will cast kids from 5 to 18, and possibly into early 20s for some roles. Auditions will be Sept. 23-24.

“The Other Side of the Mountain”

Logue says this is yet another incredibly well-written and constructed play from the theater’s playwright friend, Catherine Bush. Bush was in Danville and worked with The Black Box before it became West T. Hill.

It’s an award-winning play set in Appalachia, a piece Logue calls a “suggestive, drama/comedy,” and also part of a trilogy — the theater did “The Quiltmaker” last year. A clash of cultures, shattered dreams and secrets permeate this thought-provoking play, she says. “It reminds us once you’ve seen the other side of the mountain, you can never go back,” Logue says. Roles will be available for four women and three men, with auditions Dec. 9-10. The director is still tentative at this point.

This is a classic and beautiful story, Logue says, of young orphan Anne Shirley sent to live with Marilla and Matthew Cuthbert on Prince Edward Island. Written by L.M. Montgomery and adapted by Sylvia Ashby, Logue says this piece was also on the WTH stage about 15 years ago.

“But it’s always surging in popularity, especially now that it’s come back as a TV show,” she says. Everyone, it’s seems, if familiar with this sweet and charming story, she says. “Anne brings vitality, life and unexpected love into the lives of an aging brother and sister, not to mention the entire community of Avonlea.”

Roles will be available for four men, five women, four girls and three boys. Auditions will be Jan. 20-21. Logue will direct.

A comedy by Ken Ludwig, Logue says this is a popular situation comedy with a little bit of slapstick.

“It basically takes place in a theater green room as a traveling actor husband and wife are getting ready to perform classical theater,” Logue says. She says a huge misunderstanding leads to hilarity.

“Carol Burnett starred in this piece on Broadway in 1995 and it was a huge success,” she says. Directed by Darrell Rickmers, roles will be available for four men and four women and auditions will be March 24-25.

Logue says CAMPCAUSEWELOVETOACT will return next summer to focus on workshopping “How to Eat Like a Child,” by Delia Ephron. “This was an innovative musical for kids, although it first came on the scene on a TV special in the ‘80s with Dick Van Dyke at the helm, and it’s still timely,” she says.

The joys and sorrows of being a child, mostly conveyed through stories, monologues and one-liners, Logue says it’s fast paced and sure to appeal to kids. Camp registration will be May 23-25, and camp dates will be July 22-26, with three shows planned for July 26, 27 and 28.

“We’re hoping we’ll get some of the Irish back next year to help with this, too.”

Sneak peek: Logue says the theatre is in its 39th season this year, and a 40-year anniversary is planned for 2019.

As part of West T. Hill Community Theatre’s summer camp, Shamrock III, a special meet-and-greet will be 5:30-7:30 p.m. July 13 at the Community Arts Center. The camp — 122 registrants strong this year — welcomes returning instructors from UpLift, a performing arts school in Carrickfergus, Northern Ireland, Danville’s sister city, who are coming back for their fourth year. The community is invited to come help welcome the troupe. Campers and their families are invited in order to meet their instructors before they start.