In focus: Tariffs on U.S. whiskey could dampen Ky. bourbon spirits, but how will Boyle County be affected? 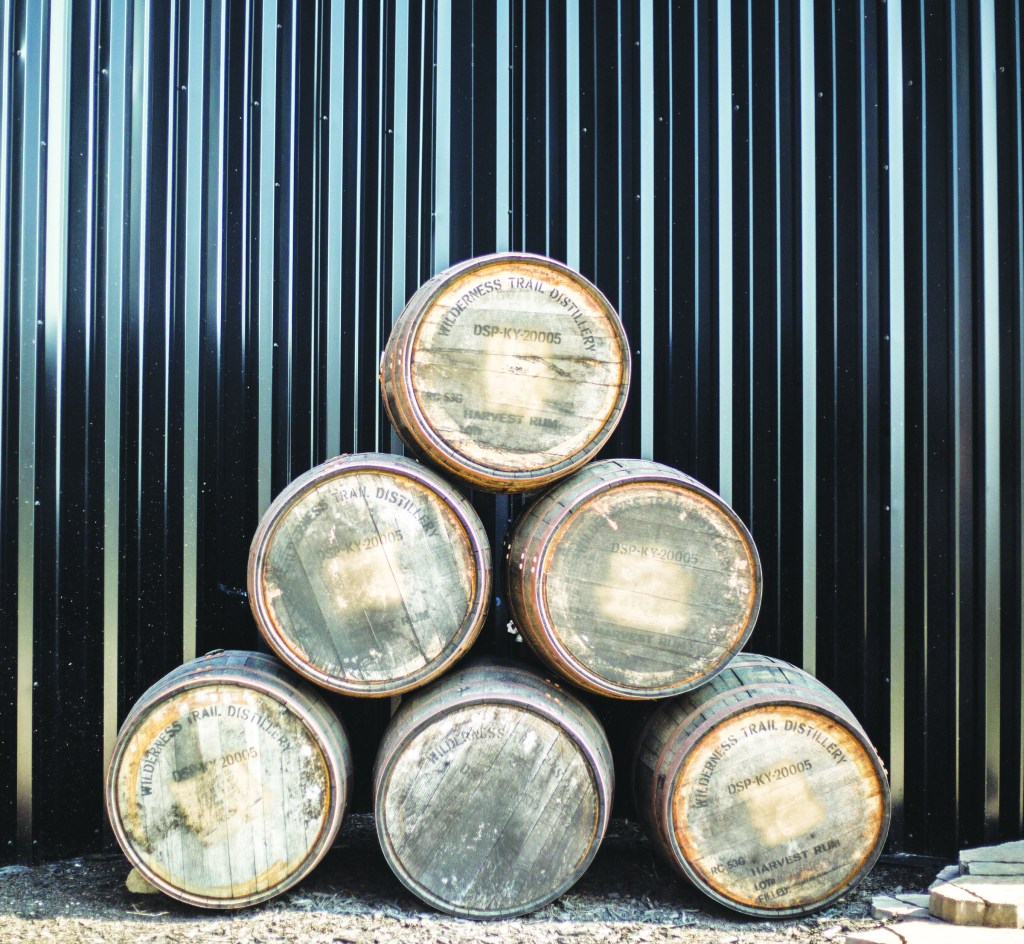 Ben Kleppinger/ben.kleppinger@amnews.com Barrels sit in a stack outside Wilderness Trail Distillery in Danville in 2017.

New tariffs aimed at U.S. whiskey exports could seriously impact the Bluegrass State’s booming bourbon industry. That could be problematic for Boyle County, which has a growing bourbon and bourbon tourism sector.

“Bourbon for Boyle County is critically important to tourism,” said Jennifer Kirchner, director of the local Convention and Visitors Bureau.

Boyle County is home to Wilderness Trail Distillery, which Kirchner said brings more than 30,000 visitors to the county every year and now hosts the annual Kentucky State BBQ Festival. It’s also headquarters for AmBraBev, a premium Brazilian cane spirits company with a new distillery facility on Techwood Drive. The county’s growing number of trails are being designed with bourbon in mind, Kirchner added.

“We are developing an entire section of the trail system to enable people to ride or hike from the new mountain bike park to (Wilderness Trail Distillery) because it is such a tourism hub,” she said. “… Geographically, Danville is a natural spot to stop along the Bourbon Trail, so we use that to our advantage. And with our ever-increasing offerings, it is an area of huge growth for tourism. We are very much depending on bourbon growth as part of development plans for the future.”

There’s no doubt Kentucky is riding a bourbon wave. Bourbon is now an $8.5 billion industry in Kentucky, and it’s responsible for 17,500 jobs with an annual payroll of $800 million, according to the Kentucky Distillers Association.

“More than $1.1 billion in capital projects has been completed or is planned and underway in the past five years and the next five years, including new distilleries and aging warehouses … bottling facilities and tourism centers,” according to the KDA. “… Since the turn of the century, Kentucky bourbon production has skyrocketed more than 315 percent.”

Wilderness Trail is part of that new growth — it is just this year entering the market with its first four-year-old bourbon.

Baker said being relatively new to the bourbon scene means Wilderness Trail may not see any impact immediately from the tariffs now being placed on U.S. whiskey by other countries, such as Canada, Mexico, the European Union and China.

“While we have opportunities outside the U.S., we are just now starting to ramp our whiskeys into the local markets,” Baker said. “We are in over 20 states and struggling to meet the demand with our level of aged bourbon and rye whiskey, so we will remain focused with the United States for at least the next two to three years on our main whiskey lines.”

That doesn’t mean tariffs aren’t going to cause bigger problems for the bourbon industry as a whole, or that none of Wilderness Trail’s products will be affected. The distillery’s “Never Say Die” brand is designed to be aged here, then shipped to London, where it can be “finished and sold, just as the legacy of the infamous horse Never Say Die,” Baker said.

“We are very concerned for that brand, as it would be impacted by the tariffs and challenge us a little more with our original cost model,” he said. “We are forging ahead with that project regardless.”

What are the tariffs?

As has been widely reported, the tariffs, which also affect many other products, are responses to U.S. tariffs implemented by the Trump administration on steel and aluminum imports. Officials including Kentucky Sen. Mitch McConnell now call what’s happening a “trade war.”

“If we’re going to have a trade war, I hope it ends soon, because nobody wins in a trade war,” McConnell said during a visit to Danville on Tuesday. “This is one area where I think this administration — this is a risky strategy and if it’s going to work, I hope it works soon so we don’t carry this any further.”

McConnell said while it’s possible for some to benefit, such as a Kentucky aluminum company, others are hurt in the process, including Georgetown’s Toyota plant and the state’s many bourbon distilleries.

“I just hope this is a short war and there’s very few casualties,” McConnell said.

Kentucky Gov. Matt Bevin called EU tariffs on Kentucky bourbon a “money grab” during an interview on CNBC in June.

“This is just a money-grab by the EU because they don’t even have a bourbon industry. So it’s basically a money-grab on a popular product,” Bevin told the television network. “… Europeans are still going to drink more bourbon this year than they did last year; they’re just going to pay more for it because their government is going to take something.”

About 65 percent of global U.S. whiskey exports are currently facing or at risk of facing tariffs as the trade war continues, according to a letter from the Distilled Spirits Council sent to the U.S. Secretary of Commerce Wilbur Ross on June 7.

“Global exports of U.S. spirits, including bourbon, Tennessee whiskey, American rye whiskey, rum, gin, vodka, brandy and liqueurs have benefited significantly from the United States’ efforts to secure market-opening trade agreements,” the letter reads. “… the imposition of tariffs on these products by our major trading partners threatens to seriously impede the export progress that has benefited our sector and created jobs across the country.” 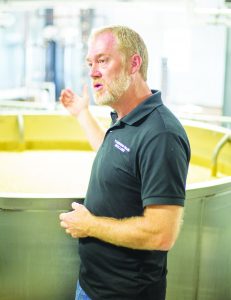 Ben Kleppinger/ben.kleppinger@amnews.com
Wilderness Trail Distillery co-owner Shane Baker leads a tour of the distillery in 2017. Baker says the distillery is still ramping up domestic sales of its bourbon and won’t see any immediate impact from recently added international tariffs on U.S. whiskey exports.

At Wilderness Trail Distillery, Baker said “the old adage of a rising tide floats all boats certainly is in play, because there is a huge interest around the world for Kentucky bourbon.”

Baker said larger bourbon producers are already “addressing” the tariffs, “some with price increases and some holding prices.”

“Some are reviewing the viability of other markets as they are often (less profitable) due to the additional logistics and cost,” he said. “In one sense, that would be good for those with a strong hold already, as they will have less competition with larger barriers to entry for newer brands.

“In the end, the consumer is the one paying the price of either less products on the shelf or higher prices. I believe that doesn’t allow the overall growth of the Kentucky bourbon industry because so many great products might never be known abroad.”

CVB director Kirchner said a slow-down on the bourbon boom has the potential for broader, downstream effects as well.

“Tourism is the obvious thing people think of when asked about the impact of bourbon, but we also must remember all of the supporting industries that are involved in bourbon production, such as agriculture,” she said. “Much of the grain is grown locally and silage is fed to cows. Another area of benefit from bourbon is the money the government realizes from distillers paying nearly $18 million in ad valorem barrel taxes this year alone. Revenue from the tax funds education, public safety, public health and other needs in local communities where barrels are stored.”

Kirchner said the tariff war is “of great concern” to Boyle County and Kentucky.

“To hinder revenue and profit with such deep involvement in our economy is a big deal. And the smaller distilleries will feel it the most,” she said. “Additionally, with decreased sales abroad, we will have a flood of bourbon in the local market potentially driving down prices. There is a significant ripple effect with hindering a signature industry and my guess is that is why the EU and other countries are focusing on it. This will hit hard in our American communities.”