A Lexington man has been charged by Danville police for allegedly attempting to flee from a hospital following his arrest.

Danville police arrested Dae’Oriontrelle Shy’Quille Hurt, 24, Thursday, after receiving information from Lexington police about the location of a stolen vehicle, according to a news release from the DPD.

Officers located the stolen vehicle and found Hurt inside, according to the release. 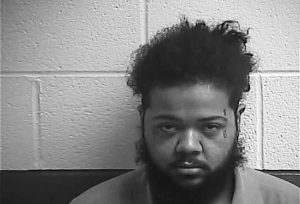 “Hurt was arrested and taken to Ephraim McDowell Regional Medical Center for treatment” because of his “level of intoxication due to narcotic use,” according to police. “While receiving treatment, Hurt was able to flee the hospital but was quickly apprehended after a foot pursuit.”

Hurt was being held in the Boyle County Detention Center on a $10,000 cash bond as of Friday evening, according to jail records. Danville police have charged him with receiving stolen property over $10,000; receiving a stolen firearm; carrying a concealed deadly weapon; first-degree trafficking in a controlled substance; first-degree possession of a controlled substance; second-degree escape; second-degree fleeing on foot; possession of marijuana; and public intoxication.