Uplifting the Arts: Academy leaders from Carrickfergus return to Danville for cultural collision in the theater 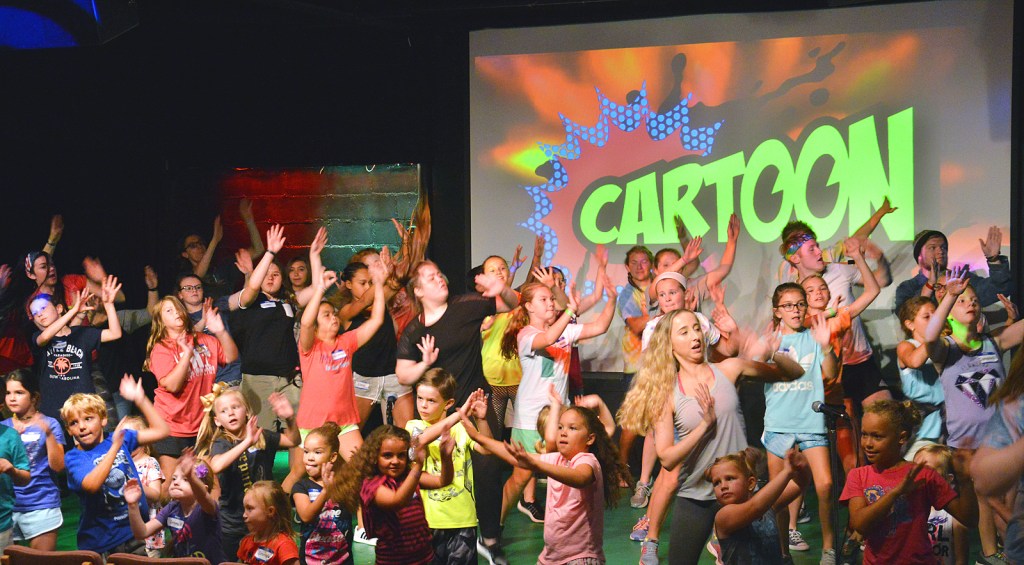 Photos by Robin Hart/ robin.hart@amnews.com About 65 kids are enrolled in the first week of camp at West T. Hill Community Theatre, led by Uplift performing arts academy out of Carrickfergus, Northern Ireland.

Stephanie Lindsay is in the states for the first time in her life. She wasn’t sure what to expect, but has been pleasantly surprised.

“Everyone has been really, really friendly and so welcoming,” Lindsay, 16, says. “It’s really lovely.”

Lindsay is with Uplift, a performing arts academy in Danville’s sister city, Carrickerfergus, Northern Ireland. This is the group’s fourth year making a special trip to Danville during the summertime to help instruct West T. Hill Community Theatre’s summer camps. Two camps are offered in two weeks, back to back, offering kids from 5 to 18 not only a place to learn song, dance and acting, but to mingle with those from another part of the world.

A student with Uplift for the last two and a half years, Lindsay was very nervous about not only teaching, but being in another country and time zone from her parents for the first time in her life. She took a few minutes out Monday afternoon to talk about her role in the camp in the lively, song-filled theater. 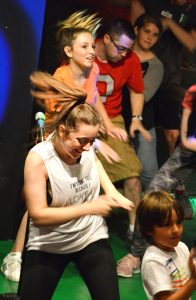 Robin Hart/ robin.hart@amnews.com Instructor Stephanie Lindsay “left” hets in the groove with campers during the first day of performance camp at West T. Hill Community Theatre. Watch for more pictures to appear from camp this week.

They arrived Wednesday, and had a meet-and-greet Friday night at the Community Arts Center. She felt better after that.

“I love how everyone here is so involved with the local theater, and the arts, and how they all volunteer for everything,” she says. Long eyelashes frame her twinkling eyes, and her sentences are all ended with a huge, glowing smile. She really can’t contain her enthusiasm, and it’s contagious.

Neither could the other 65 kids who were roving around WTH, from the inside of the theater to the outside, and even across the street to West’s Wing. They were following instructors learning choreography to go with a Spongebob Squarepants song in the front foyer; and more choreography and singing was going down on stage. Faces were lit up from row to row of kids.

“We’ll have another batch of close to 65 next week, too,” Karen Logue says. She’s managing director of the theater. She says it’s hard not to feel elation and totally upbeat at all times when involved in the camp, and it shows on her face. Smiling through her eyes, she says, “Friday night’s showcase tickets are already sold out.”

Each week’s camp groups put on their own showcase at the end. And what they learn isn’t just dance moves, how to enunciate on stage or make sure and be heard in the back rows.

“To me, it’s all about self-confidence,” says Jenna Mccartney, 19. She started with Uplift at only 6 years old, and “worked my way up to teacher.” She was last in Danville participating with the summer camps in 2014, and says she was ready to make the return trip back again: “Oh, definitely, I wanted to come back …”

“It’s just crazy, how our photos are all in the shop windows around town, on doors…” she says, describing a bit of celebrity treatment the troupe really enjoys. But it’s more than that for her.

“At first, when some campers come in, they are a bit shy, maybe a bit emotional. By the end of the week, they’re different kids,” she says, something she notices here as well as in camps back home in Carrickfergus. “It’s amazing to watch and know I had a part in that change.”

As far as the combining of the two cultures — there are about 11 instructors here from Carrickfergus, including its owners, Ryan and Amy Moffitt — Mccartney says there’s a different way of working here than there is at home.

“At home, we’re more reserved. Confidence levels in Ireland aren’t as high as what I see here. We have to sort of pull it out of kids there. Here, they come in kind of ready to just be all out there, it’s really nice,” Mccartney says.

Campers are split up into three groups, according to age, where instructors can focus on them. And it really does take a village, Logue says. She points to volunteer Steve Rhinehart, standing by in the isles as kids learn moves on the stage.

Rhinehart began helping after his granddaughter was involved in the camp; and he participated last year in the unique adult camp the group offered.

“I’ve done whatever they need — serve lunch, run errands, hang a banner, clean the bathroom…” Rhinehart says, something which Logue says is priceless.

“People like this are the ones who help me keep it together,” she says, motioning to Rhinehart.

“I watch for the kids who look like they need something. With kids as young as 5 here, it can be a little overwhelming for them. If I can tell they’re looking for something, I’m there to help …” Rhinehart says.

And the leadership from the Northern Irish is also priceless, Logue says something others in the community have picked up on over the years, throughout their visits. Not only do community members come forward to help provide transportation and fun events for the crew during downtimes, but around 12 different kids’ parents paid for them to take both weeks of camp instead of just one.

“That’s kind of a big deal, and really says something about what they get here,” Logue says.

Board member Hillary Zimmerman, also a teacher at Woodlawn Elementary School, says teaching kids “art” isn’t just enough; they must be able to connect with their communities, as well — something this camp is excellent at, she says.

“It’s important for us as a community to showcase our children’s art, and let them know how important it is for them to be involved in the community, too,” she says. The hours she volunteers during the camp as Logue’s “right-hand woman” will count toward her 24-hours required of professional development as a teacher. She says watching Logue and how she connects not only to the students, the teachers and volunteers, but with the parents has been important to her.

“Just watching her and how she works, it’s pretty amazing,” she says. “She’s always in contact with the parents …”

Making sure the art-aspect is on the forefront of kids’ minds is incredibly important, teen instructor Lindsay says.

“Art is really important. It allows them to express their creativity, but the arts are getting pushed to the side more and more …” she says, saying that arts funding has been getting cut in Carrickfergus just like it has in the states.

“I like having art back up in the front, and it’s so great to have people from different parts of the world collaborating and coming together like this. People can come together and learn from each other,” she says.

“For me, it’s nice to get to see everyone from my ‘new home’ come together with my old home, and how they work so well together,” Amy Moffitt said, who’s American. She and husband Ryan consider their ties to Danville important. “It’s something really special.”