From The House: ‘Unnecessary Farce’ checks all the comedy boxes 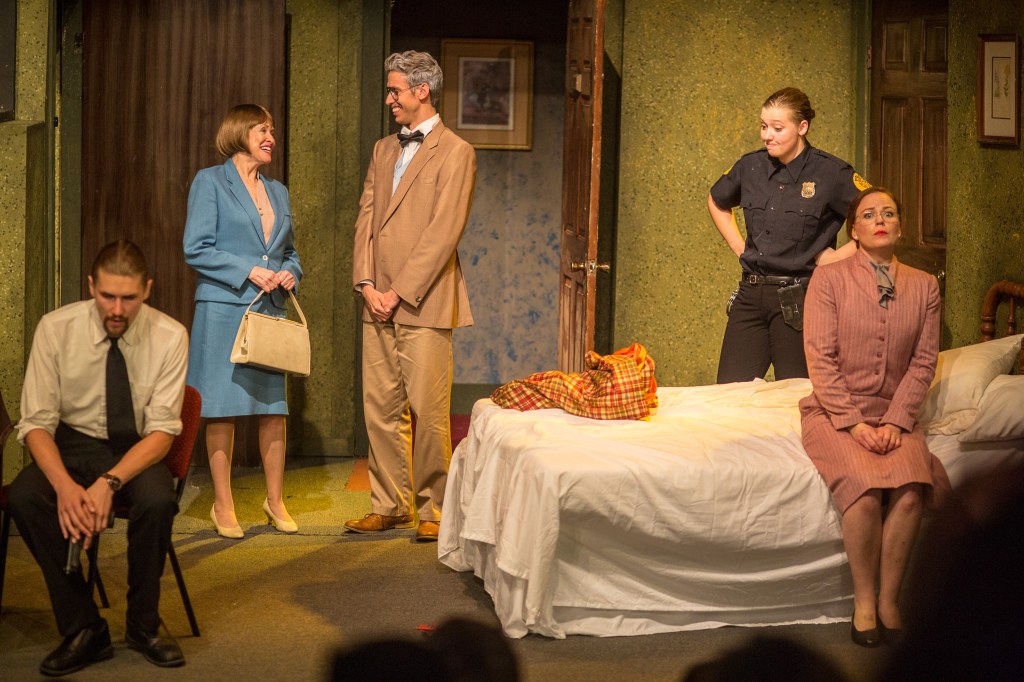 It wouldn’t be a summer at Pioneer Playhouse without a downright silly farce. This year, that farce is “Unnecessary Farce,”

which is showing at the outdoor theater through Aug. 4.

It’s an over-the-top, high-energy performance with lots of physical comedy, chase scenes and silly faces — all standard components of farce, which emphasizes absurdity and exaggeration to get as many laughs as possible.

Giancarlo Herrera and Andi Johnson star as fairly clueless cop partners Eric Sheridan and Billie Dwyer, who have been tasked with setting up a sting operation.

Herrera and Johnson have very physical roles to play as they scramble between rooms, get shoved into closets and fight with bad guys — though as is always the case in plays like this, no one knows who the bad guys really are until the end.

The cops’ mole on the inside is Karen Brown (Erika Lee Sengstack), who has planned a meeting with the sting’s target, Mayor Meekly (Dalton Graves), at a hotel room.

Sengstack returned to the Playhouse this year to star in the theater’s Kentucky Voices play “Granted,” the third and final installment in the May Hollow trilogy based on Stanford resident Angela Correll’s novels. She hung around for “Unnecessary Farce” and that’s a good thing — she knows how to play the audience and has excellent chemistry with Herrera (their characters are romantically involved).

The show is stolen partway into the first act, once Agent Frank (Forrest Loeffler) and the terrifying Todd (Daniel Hall Kuhn) have shown up.

Agent Frank and Todd trigger mass chaos in the plot; Loeffler and Kuhn use their roles to get tons of laughter from the audience.

Kuhn, like Sengstack, is a very popular former Playhouse star who was lured back to the stage for a different play — “The Return of Tinker Doyle” — and has hung around for additional performances. He’s the perfect choice to play Todd.

Most of the first act’s cartoonish scrambling around is used to set up the arrival of Todd. Once he does arrive, the stage is his as he rants and storms about.

The play’s cast of seven is rounded out by Patricia Hammond, who portrays the wife of Mayor Meekly (Graves). The mayor and his wife have smaller but very important roles for the plot. Graves and Hammond are both pros and use what time they do have on stage to great effect.

There’s nothing unique or surprising about “Unnecessary Farce” — it’s a fairly typical comedy as things go. But the casting is excellent and the acting is solid throughout, which makes seeing it a very enjoyable experience.