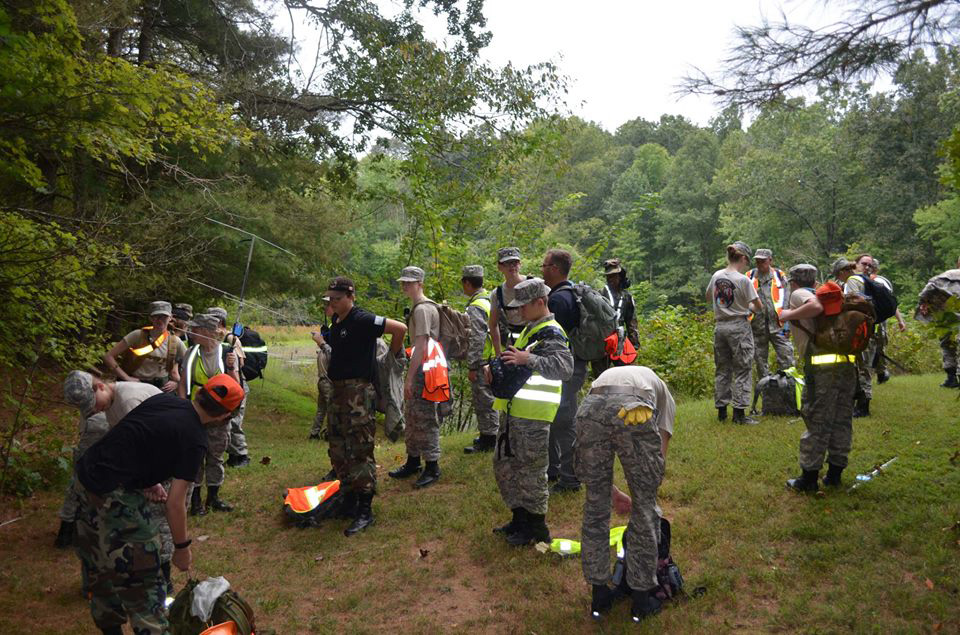 This past weekend, Sept 7-9, the Kentucky Wing of the Civil Air Patrol held a search and rescue exercise (SARex), hosted by Stuart Powell Cadet Squadron in Danville, that was full of emergency services training. This type of training is used to prepare volunteers for disasters such as Hurricane Florence.

The incident commander for the SARex, Lt. Col. Robert Rothenberg, said, “Normally, we conduct mock missions in a SARex. This weekend, we felt that it was important to focus on intense emergency services training.” He went on to say “Special thanks is given to the National Guard, who allowed use of the Danville Armory and the American Red Cross who provided cots and blankets. It is a testament to the coordinated effort and support among local agencies.”

In the rain, new qualifications were obtained by adults and youth members. In addition, field training was conducted. 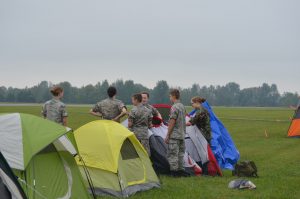 Photo contributed
Civil Air Patrol cadets help each other pitch their tents during the SARex training event this weekend.

Mission radio operator (MRO) training coordinates radio communication between command base, aircrews and ground teams. Air crews could not fly due to the inclement weather.

Many of these training qualifications include cadets ages 12-18, who are trained the same as the adult members. Cadet First Sergeant Lydia Tumminello said, “At the SARex, I learned all about hot and cold weather injuries, universal precautions and what signals are used in a search line. I feel more prepared to use what I learned to help my community, state, and nation.”

Kentucky Wing is on “standby” alert status for any assistance that is needed due to Hurricane Florence. Three aircrews and several ground teams have been prepping airplanes and vehicles and are ready to deploy. The Civil Air Patrol network of Wings, or states, supports other states when major disasters strike. A team from other areas will deploy and support operations in an affected area, enabling the local members and their community to deal with their recovery.

Civil Air Patrol, the longtime all-volunteer U.S. Air Force auxiliary, is the newest member of the Air Force’s Total Force. In this role, CAP operates a fleet of 560 aircraft, performs about 90 percent of continental U.S. inland search and rescue missions as tasked by the Air Force Rescue Coordination Center and is credited by the AFRCC with saving an average of 80 lives annually. CAP’s 60,000 members also perform homeland security, disaster relief and drug interdiction missions at the request of federal, state and local agencies. In addition, CAP plays a leading role in aerospace/STEM education, and its members serve as mentors to over 25,000 young people participating in CAP’s cadet programs.