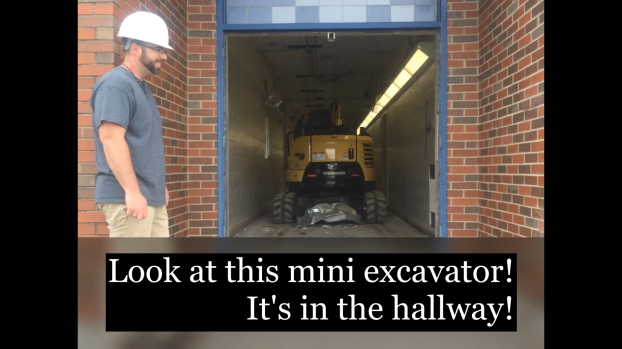 Images by Christy Denny Screenshots show parts of a video showing students what’s been going on inside Hogsett Primary School during a major renovation project.

Hogsett Primary School students may be attending school elsewhere while their building is renovated and expanded this year, but they’re getting to keep up with the

physical changes to their school thanks to videos being produced by the district’s director of administrative services.

Christy Denny’s first video of work being done at Hogsett shows students what some well-known rooms in the school look like now and provides a demonstration of how workers are demolishing walls with sledgehammers. Hogsett’s STEAM (science, technology, engineering, art and math) teacher Kelley Hammond has shared the video with her students, and it’s also been posted to social media by the district and school staff, Denny said. 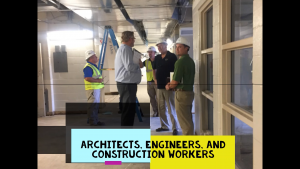 “I wanted to find a way to involve the students during the progression of the project,” she said. “Since the age of the students ranges from 3 to 7 years old, I thought that visual pictures and videos with some simple explanations would be interesting, as well as educational for these kids.”

Denny said she visits the Hogsett building regularly and often has a tablet computer with her to take photos and videos as progress is made.

“The most interesting part so far for me has been how the demolition actually happens,” she said. “The crew uses hand tools like sledgehammers, as well as heavy equipment that can navigate (inside) of the building, like the excavator and skid-steer.”

The school district is paying an estimated $8.88 million to completely overhaul and expand the Hogsett building, with about $830,000 of that cost being covered by the state School Facilities Construction Commission.

The school serves all of the district’s students from pre-school through first grade. The students are attending school in the former Jennie Rogers Elementary School this year; officials hope Hogsett will reopen for the 2019-20 school year.

Denny said she plans to continue sharing videos with students and the Danville community “throughout the entire project.”

“The next video will show what’s happening on the exterior of the building to prepare for the construction of the additions,” she said. “I hope to have it ready next week. I was able to get video of workers as they were working and have them explain what they were doing and why.”