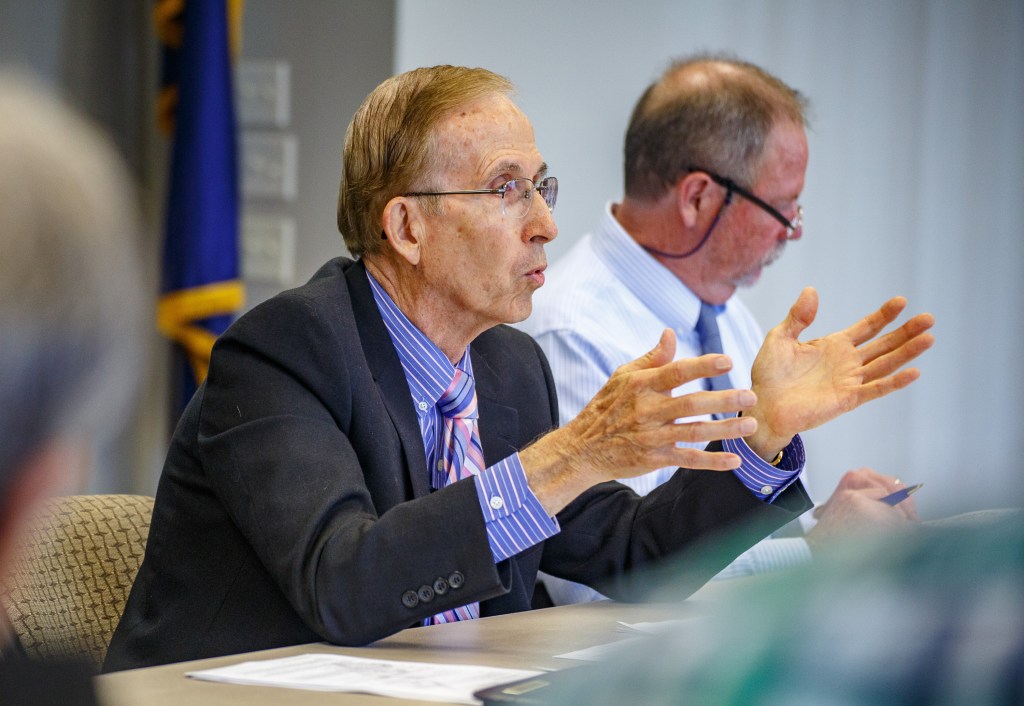 “Discriminatory” bond practices and lethargic case-processing times at the circuit court level are the main culprit responsible for overcrowding at the Boyle County Detention Center, according to a comprehensive study of the criminal justice system in Boyle and Mercer counties.

The jail is stuffed with pretrial felony defendants who can’t afford their bonds and must wait months to resolve their cases, according to the blunt assessments of consultant Dr. Allen Beck in chapter two of the 106-page “Jail and Justice System Assessment.” The report, which is still in draft form, was commissioned by Boyle and Mercer counties to help them address the jail’s constant overcrowding and ballooning budget. Consultants hired by Brandstetter Carroll have gone over tens of thousands of documents and jail records and conducted dozens of interviews with people involved in the local criminal justice system at every stage — except, notably, not with any judges: “Unfortunately, the Circuit Court Judge (Darren Peckler) refused to participate in the study and prohibited the District Court Judge (Jeff Dotson) from participating,” the report states.

Beck’s assessment in chapter two points a finger squarely at many practices of 50th Circuit Court Judge Peckler. It blames Peckler’s practices of requiring cash bonds; setting limits on the number of pleas he will hear; revoking bonds when defendants are indicted; and not offering bonds to participants in a new “rocket docket” program, among other things.

“The analysis in this chapter disclosed that case processing issues in the circuit court has been a major contributor to jail overcrowding. Resolution of some issues may be easier than others,” the chapter’s conclusion states. “… Of all of the recommendations in the entire project report, those in this chapter have the greatest potential to substantially reduce the jail population.”

The use of financial bonds — requiring defendants to pay money to leave jail — is a major contributor to the jail’s population, the report finds. Data in the report from Kentucky’s Administrative Office of the Courts shows that defendants in Boyle and Mercer counties are able to leave jail without paying money at far lower rates than in comparison counties selected for the study.

Judges in Clark County, on the other side of Lexington, let defendants out on non-financial bonds 18 percent of the time over the last eight years, according to the data. In Woodford County to the north, it was 25 percent; in Harlan County in eastern Kentucky, it was 55 percent. In Boyle County, it was 4 percent; in Mercer, 3 percent.

“It is difficult to avoid coming to the conclusion that the circuit court judge does not believe in non-financial bonds,” the report reads.

The report does note a “major decline in the jail population in the last several months,” which it attributes to the public defender’s office and defense attorneys “advocating for the pretrial release and use of non-financial bonds during circuit court arraignment.”

“It is not uncommon for changes in court-related practices to begin changing during criminal justice system studies,” the report states. “The increased attention on case processing can act as a stimulus for members of the system to reconsider habits and expectations that have become ingrained in how they process cases and interact with the court.”

Despite the recent improvement, the report says there is still a “local legal culture in which members reinforce their belief (in financial bonds) through interaction with each other.”

“There is a glaring issue that must be addressed. That issue is the belief that the amount of money bail controls behavior. This belief is not only reflected in the actions of the circuit court judge, but in other members of the criminal justice system,” the report reads. “… It is a strong dynamic that sometimes is only overcome by replacing the players. Rather than advocating their replacement, the consultant recommends bringing in one or more informed persons from the Pretrial Justice Institute to make a presentation or hold a workshop for criminal justice officials on this issue.”

The Brandstetter Carroll report also notes that financial bonds can be “discriminatory” because “economically able defendants are able to post bond, while the less affluent stay in jail.”

“Many court cases and a volume of research attest to the discriminatory nature of blanket application of secured bonds,” the report states.

Requiring cash from poor people to get out of jail can cause defendants to plead guilty to crimes they didn’t commit in order to speed things up, the report states.

“Interviews of attorneys in Boyle County support this contention — that some poor defendants plead guilty just to get out of jail and thereby avoid the long duration of case processing,” the report reads.

A January order signed by Peckler has limited the effectiveness of a new “rocket docket” program in Boyle County, the report finds. The grant-funded rocket docket program is designed to expedite low-level drug and drug-related offenses and reduce “unnecessary incarceration time for low-level drug and drug-related offenders,” according to the report.

But Peckler’s order requires that if any defendant opted to participate in the rocket docket program, the county “shall issue a bench warrant with no bond until said case has been reviewed by the court.”

This order “seems to be counterintuitive” since defendants could be expected to be more compliant with bond conditions if they have the chance to resolve their cases more quickly, the report states. “On the other hand, this order is in keeping with the judge’s practice of revoking the release of all felony defendants after being indicted by the grand jury, regardless of their success in compliance with release conditions.”

As a result of Peckler’s order, the rocket docket program “has been very minimally utilized,” according to the report. “Interviews with attorneys in Boyle County found that they discourage their clients from pursuing the rocket docket option.”

The public defender’s office estimates that “about 80 percent of felony cases in Boyle County could potentially be rocket docket cases since they fall into the non-violent, non-sexual Class D category,” according to the report.

Peckler’s practice of setting new bonds for defendants after indictment is another target of the report.

In the 50th Circuit Court, after a grand jury issues an indictment, “the circuit court judge rejects most or all previously set bonds by the district court judge” and sets new bonds, typically of $5,000 cash for a Class D felony and $10,000 cash for a Class C felony, according to the report. “… The judge is, in essence, acting as a magistrate to set bonds anew. In doing so, he is disregarding the evidence of success of defendants who appeared in court and remained crime-free while out on pretrial release under bond set by the district judge. As a result, more defendants cannot afford the new bond.”

“The attorneys have addressed Kentucky Court Rules that emphasize pretrial release and the use of non-cash bonds,” the report reads. “As a result, the circuit court judge has altered his pattern of setting bonds.”

The report also documents numerous ways in which circuit court policies slow down the processing of criminal cases, in many cases causing defendants to wait in jail for a month or more before an appearance.

There is only one plea day set every month and “the judge sets a cap of 25 cases in the morning and 25 in the afternoon,” the report states. “If the number of defendants exceeds that number, the defendant has to wait another month. In some instances, heavy case loads have resulted in waiting for two months.”

After a defendant is charged, they must be arraigned. In Boyle and Mercer, there’s one arraignment date every month. But someone arrested shortly before that arraignment date isn’t allowed to be arraigned right away; they have to wait for the next month’s arraignment. There were people arrested after May 31 this year who were not on the June docket and had to wait until July 3 for arraignment — “a delay of 32 days,” the report explains.

The circuit court further slows down the process by not transporting incarcerated defendants for every status hearing in their case, according to the report:

“If defendants were present for all court hearings, negotiations could occur continually in the courtroom as the docket progressed. That would result in many cases being resolved at that time. However, under current court practice, jail inmates are not brought to court for status hearings. As a result, nothing other than continuances occur. To accommodate all individuals on the docket being present for all hearings, court sessions would need to be held more frequently and the judge would have to be willing to work past five o’clock on some occasions, which is a common practice in other jurisdictions.”

• the Pretrial Justice Institute should be brought in to address use of non-financial bonds;

• the no-bond requirement for the rocket docket program should be ended;

• “The revocation of bonds set by the district court after grand jury indictment should be substantially altered, if not dropped as a practice;”

• the circuit court should add a new court date each month to allow for faster processing;

• the circuit court should allow defendants to enter pleas at any time, instead of only on specific court dates — or at least add additional plea dates;

• the circuit court should no longer limit the number of pleas it will hear to a specific quota; and

• the circuit court should transport all defendants who are in jail for all court hearings so in-court negotiations can happen more frequently.

The report notes similar problems with non-financial bonds and case-processing speeds at the district court level, but finds that misdemeanor defendants make up a smaller portion of the jail population and have their cases resolved more quickly: “Detention of persons charged with misdemeanor offenses has a much smaller impact on the jail population.”

The Advocate-Messenger has offered Peckler a chance to respond to the findings in the report. The paper will print a story with his responses if he chooses to respond.