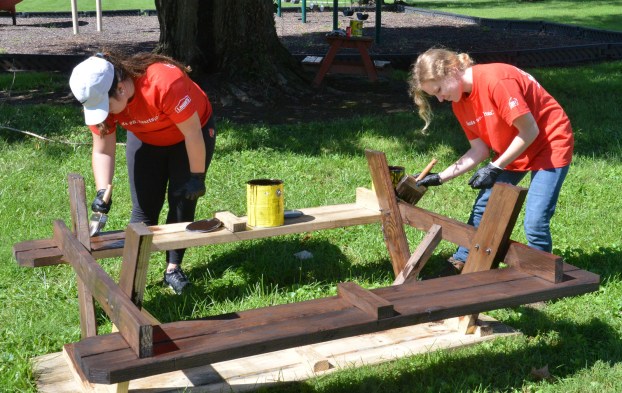 Once a year, Lowe’s chooses a nonprofit agency to help make an instant change and improve its facility. This year, Sunrise’s Woodlawn Center was chosen because the residential treatment home — for boys ages 6-18 with severe emotional and behavioral problems — lost its students’ activity center due to a massive fire in January of this year.

Plans are in the works to construct a new activity center and pavilion in the future. And thanks to Lowe’s and its crew of volunteer employees, the Gibson Cottage will already be spruced up and ready for service.

The brick house has been uninhabited since the 1990s, according to Melissa Bailey, Sunrise marketing director.

The Lowe’s Heroes Program utilizes payroll hours to send volunteers to help nonprofits, Bailey said. And seven area Lowe’s stores donated about $28,000 worth of supplies and appliances for the project, Bailey said.

Bailey said some of the donations will be used toward rebuilding the activity center, and some will be used in other buildings on the property that need sprucing up.

“Sunrise is immensely blessed by the compassion and hard work of our friends at Lowe’s Heroes,” Bailey said. “We are grateful for community partners like Lowe’s who support our ministry because of the love they have for kids who are hurting. We couldn’t do what we do without them.”

Photo by Robin Hart/robin.hart@amnews.com Mary Shultz uses a push broom to cleanup after the Lowe’s crew had finished painint and laying a floor in a back room at the Gibson Cottage on Friday.

At left, Laura Clemons and Jessica Lewis, both volunteers from the Georgetown Lowe’s, place flooring down at the Gibson Cottage.

The Gibson Cottage sits directly behind the Birney House on Sunrise Children’s Services Woodlawn campus. All this week volunteer Lowe’s employees worked to replace windows and light fixtures, lay new flooring, paint and landscape around the building. It has been unoccupied since the 1990s.

Photo by Robin Hart/robin.hart@amnews.com Jacob Betler, from Danville Lowe’s store, lays down flooring in the Gibson Cottage, as other Lowe’s Heroes work in the background.

Photo by Robin Hart/robin.hart@amnews.com Jacob Betler wipes dust and sweat from his eyes as John Masters walks by with a piece of floor molding he had just measured and cut to put down at Sunrise Children’s Services Woodlawn campus Friday afternoon. The two men are “Lowe’s Heroes” from the Danville store, where Masters is the store manager.
You Might Like

Most of the members of Perryville City Council gathered together Wednesday morning for a 10 a.m. meeting with state transportation... read more