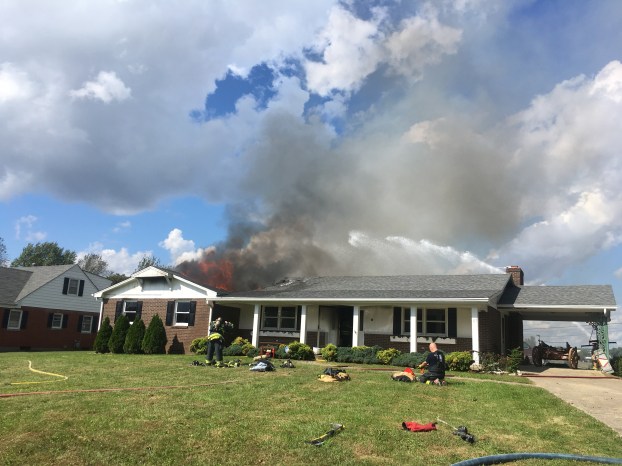 Firefighters work at the scene of a fire along Bonta Lane Wednesday afternoon. (Photo by Robin Hart)

A home on Bonta Lane was destroyed by fire Wednesday afternoon. The house’s two residents weren’t injured, but the Boyle County Fire Chief had to be taken to the hospital after battling the blaze. 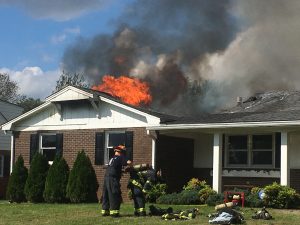 Before the fire was completely under control, BCFD Chief Donnie Sexton was taken to Ephraim McDowell Regional Medical Center to be checked out for heat exhaustion and or inhaling too much smoke, said Mike Wilder, director of Boyle County Emergency Management. Sexton is expected to be OK, according to Wilder.

A man working in a yard across the street said he reported the fire at 2:11 p.m. after he heard people yelling and saw the smoke and flames. Henry and Regina Walker were inside the home when the fire broke out, but they got out safely and watched the scene from a neighbor’s home across the street, according to Wilder.

As firefighters worked in teams attacking the fire, Wilder was already interviewing the family. He said they had lost everything, so he was contacting the Red Cross for its assistance in finding a place for the couple to stay Wednesday night and any other immediate help they needed.

By 3 p.m., firefighters from Danville and Junction City were also at the scene, helping the Boyle County Fire Department contain the blaze.

As black smoke billowed from the roof and orange flames spit out of holes, firefighters sprayed them with water and a white foamy fire retardant.

BCFD Assistant Chief Tony Broyles said they were working a combination attack on the interior and exterior of the house with Rapid Intervention Teams.

He said they would probably be working at the scene until dark Wednesday night, making sure flare-ups didn’t occur.

The legal force and local residents behind a move to hold a corporation responsible for pollutants in Herrington Lake received... read more