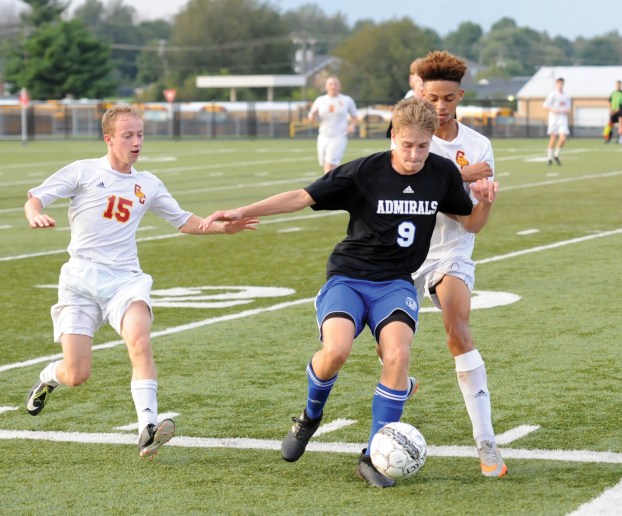 The top-ranked team in the 12th Region showed its stuff Monday in the 45th District tournament.

Danville took down Garrard County 11-1 with six goals from Nathan Hazlett and three more from Alec McAllister in a mercy rule victory.

Danville is back in the 45th District championship for the third straight season, but the Admirals expect more than just a return to the 12th Region tournament. Danville will face Lincoln County in the district title on Wednesday.

“It’s definitely going to be a game played with a lot of intensity and emotion because we beat them earlier in the year,” Danville head coach Brent Beauman said. “They are going to want revenge for that. They do different things and they do things well. On Wednesday, hopefully we can be back close to 100 percent. We have a lot of injuries and sickness going through but it will take 100 percent to beat (Lincoln), not only with their skill but their intensity, emotion. High school sports, you can’t bet on who’s better. It doesn’t matter, you put in a lot of effort, you can do a lot of good in these games. Hopefully we’ll be ready and prepared.”

Danville’s last (and only) loss this season came in the All-A state championship game against Louisville Collegiate on Sept. 30.

“It was a tough loss for them,” Beauman said. “That’s the hardest I’ve ever had a team take an All-A loss. It was a great game, intense game against the No. 4 team in the state. It was everything you wanted in a championship game. The two games after that, we struggled. Hopefully tonight will get them more excited to play with passion.”

Since the All-A title game, the Ads have a 4-1 win over Thomas Nelson and a 5-2 victory at Pulaski County.

“I feel like the team has come together after the Collegiate loss,” Hazlett said. “I think it showed us that we’re not the best team in the state, we knew that but I think we were holding our heads a little too high when we were playing.”

The 2-1 loss to Collegiate was also proof that the No. 13 Admirals can hang with the state’s best.

“It showed us that we’re up there,” McAllister said. “We can compete with the top five teams in the state. If we really put the work in and come out ready to play, we can make a name for ourselves in the postseason this year. In practice afterwards, coach talked to us about how we shouldn’t hang our heads and how we should use this to drive us and motivate us to keep going.”

The players said that it’s one step at a time, and the next step is the 45th District title. Danville beat Lincoln in Stanford 5-2 earlier this season.

“With these rivalry games you’ve just got to expect the unexpected because everybody just comes out flying,” McAllister said. “We’re practicing on turf tomorrow to get used to the surface. It’ll just come down to being fully prepared and performing like we know we can.”

Beauman said he still sees problems with the way his team plays, particularly when attacking. That’s something that he wants to see change as the postseason continues.

“I know the guys are excited, but we’re still making a lot of the silly mistakes that are costing us goals,” he said. “I don’t know any other way to tell them not to do it, but hopefully they will pick things up and we can keep this train going.”

Goals and assists were flying against Garrard, and junior Briar Sanders put his name in the record books with an assist in the first half. He’s up to 43 for his career, tied for the No. 1 spot in Danville boys soccer history.

He’s a key part of a strong Danville team that has dedicated itself to sharing the ball, McAllister said.

“Part of it comes from us buying in this year,” McAllister said. “We all bought in this year, we’ve got big goals and we knew last year, we were a talented team. But we didn’t finish and perform in the postseason like we knew we could. We had to start off this year, just whoever scores, scores. Whoever assists, assists. We just want to win games. It’s showing and it’s pretty good division in terms of goals and assists. That’s just the way we play.”

“I think the whole team shines,” he said. “I think last year we were playing a little more selfish, now I think we know what it takes to win games. I think we shine together, we don’t have a weak spot on our team. Everybody on our team can shine in their own way in their position.”

Danville uses the big play to survive at Garrard County

LANCASTER — It wasn’t the way Danville expected to win, but the Admirals left Dyehouse Stadium with a victory. Garrard County... read more