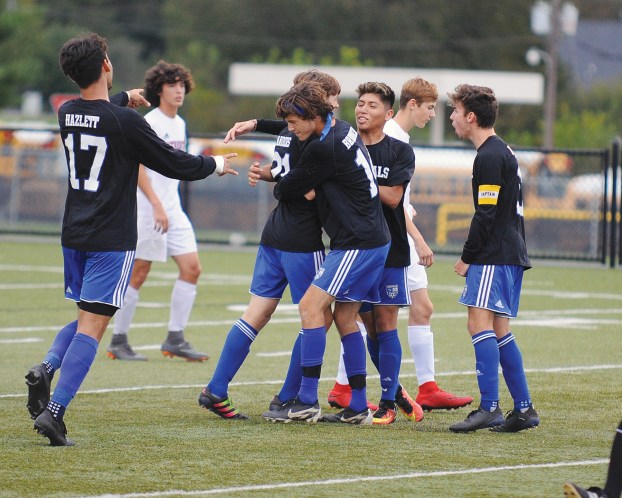 Brent Beauman had a plan to beat Lincoln County.

The Danville head coach laid out his gameplan in practices this week to move players around and play in a way that Lincoln hadn’t seen.

He scrapped those plans Wednesday before the 45th District championship game, opting instead to led his Admirals play the free-flowing soccer that they had played all season.

Danville blew through Lincoln County to a 5-1 victory in the district title game at Boyle County, the second in as many years for the Admirals.

“We had practice, we had done a gameplan, moving people around. Then today, I said, ‘let’s forget all of that,’” Beauman said. “Let’s do what we’ve been doing and let’s just go the whole time, go go go go go. Because they’re capable of it. I didn’t want them to do things out of the ordinary to get them off whack. I just wanted them to press and go. I have no idea what (Lincoln) is going to do, but I know we’re just going to keep scoring. It worked and it kind of took some of (Lincoln’s) air out early.”

The Admirals scored three goals in the first 18 minutes to take a commanding lead of the game, with goals from Briar Sanders, Angel Alaves and Sam Brunner.

“We told them, Danville capitalized when we made a mistake,” Lincoln head coach Lewis Cummins said. “Then when they made a mistake, we weren’t able to capitalize. That was a big difference. We knew Danville would throw numbers at us but they were excellent finishing tonight. Early on I think we were too defensive, the ball stayed on their offensive end too much. That allowed them more opportunities to score.”

Sanders notched career assist No. 44 — tied for the No. 1 spot in Danville’s record books — on the third goal, a free kick that Brunner met squarely and drove into the net.

Danville’s second goal was one that Beauman was thrilled to see. Nathan Hazlett played a through ball to Alec McAllister on the left, who drove past the Lincoln defense and squared the ball to Alaves for an easy score.

“We have worked on those things for 10 years,” Beauman said. “Almost every time we do it in a game, we score. Because it’s a great play, you see it in professional soccer all the time. That outside guy has the ball, he’s going to the near post, keeper has to cover near post. That’s his job. Then you slide it back and that guy’s always open.”

But the Admirals let off of the gas late in the first half, and Lincoln capitalized. It was the Patriots’ second shot on target that resulted in a goal: Hawk Randall found an open Austin Wethington, who struck it into the back of the net. The Patriots trailed 3-1 with just two minutes left in the first half.

“Like always we just took a moment to let up and keep them in it,” Beauman said. “You can’t do that because people are so emotional, you give them a chance. I told our guys, ‘that was the worst possible time to let them score. Because now they’re going to go into halftime with that momentum, they’re going to come out pumped and ready.’”

But Danville’s defense held strong. Beauman said he was proud of the way Sam and Seth Brunner — defensive midfielder and center back, respectively — shut down Lincoln’s top two goalscorers in Trey Cummins and Randall.

“We had talked about transition, because that’s pretty much how Lincoln scored Monday against Boyle,” Beauman said. “Trey Cummins is a phenomenal player. For him to not take over the game like he’s done so many other times was great. Tres (Walker) was solid, Jesus (Ayala) had a tough job covering bigger, physical guys but he did an outstanding job disrupting what they wanted to do. Sam being the defensive mid helped a lot. I said as soon as we lose the ball, one finds Hawk, one finds Trey. They did it, they did a good job.”

Danville would add two goals in the second half, a penalty kick from Hazlett and a tap-in by McAllister.

It was McAllister’s goal that made history: Sanders hit the corner kick that McAllister would tap home, giving Sanders his 45th career assist and the No. 1 spot in Danville’s record books for assists in a career.

“Briar, that was his goal at the beginning of the season,” Beauman said. “We were at Camp Horsin’ Around talking about goals and he said ‘I want to be the all-time assists leader, I want to break the assists record.’ That is his game. That first goal was a heck of a strike, he can do so much. He’s such a laid back, super intelligent kid. He’s always chilling, calm on the ball and then boom, he can hit a pass. He reads the game, he’s just a quality player and person.”

Both Danville and Lincoln County will advance to the 12th Region tournament, played at 46th District champion West Jessamine.

“The good part is, this is a learning game,” coach Cummins said. “Example, last year Mercer and West in the same district were in the region finals. If we come ready, anything can happen. But I was proud of the boys effort all night, they fought hard all night. Now the next couple days we get ready for region.”

The Admirals will go into region as one of the top teams, but they learned last year that it’ll be a challenge from the first game. Mercer defeated Danville in the first round of region last year.

“Our region is tough this year. There’s quality and everybody can score,” Beauman said. “That’s what is so dangerous, you know going in that you’re probably going to get scored on so you have to go in and make those adjustments. Which is good, it says a lot about our youth leagues and middle school programs. Every team has players, you know it’ll be a good battle.”

Admirals up to the task vs. Lincoln County

Danville knew Tuesday’s game against Lincoln County would be a test. It’s a test that the Admirals passed, beating the... read more