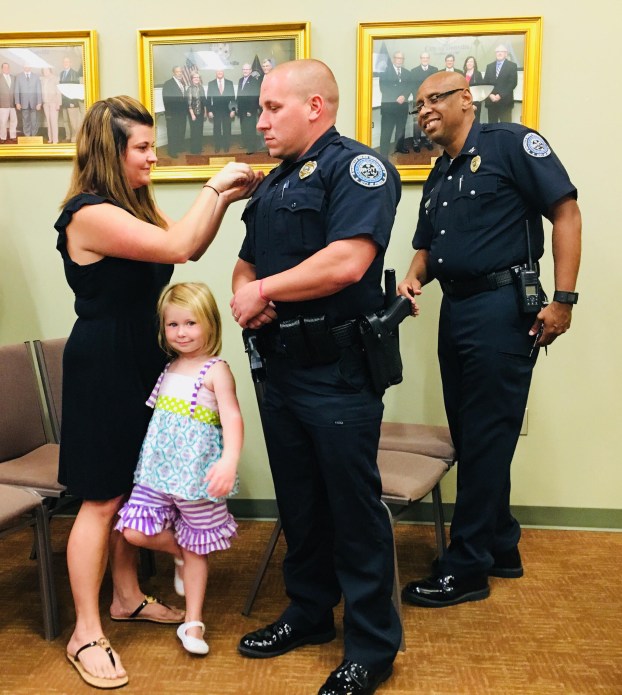 Bobbie Curd/bcurd@amnews.com Glenn Doan is pinned as assistant chief of police by wife Brenna and their daughter Audrey at their feet, while Chief Tony Gray looks on. Doan replaces Robert Estill, who left the force earlier in the summer for another opportunity.

Former Danville Police Officer Glenn Doan is now the assistant chief; he was pinned during a short ceremony at Monday’s city commission meeting.

With wife Brenna and daughter Audrey standing by, Doan stood beside Chief Tony Gray while he told the commission why Doan was chosen. Doan began with the police department in 2006 as a patrolman. He was promoted to sergeant in ‘09 and captain in ‘13. He has served as a patrol training officer, as well as a supervisor for the PTO program for the last several years.

After the meeting, Gray said Doan’s leadership skills have stood out among the force.

The city also presented the key to the city to visiting artist Dee Craig, from Belfast, Northern Ireland. Craig was picked to be this year’s artist by the Sister Cities Committee, as part of an artist exchange program with Carrickfergus, Danville’s sister city.

Norma Gail Louis told the crowd that Craig is an international artist who has created murals all over the world. “We are so honored and privileged,” she said.

“We’ve just been taken back by the beauty, and the huge welcome we’ve gotten from the city. It’s just totally amazing to be part of this project … The Sister Cities program — it’s just an amazing program, and it’s something that should be built upon … The youth need to be the driving platform of the Sister Cities platform,” Craig said. “So hopefully this program will be a platform to start a conversation.”

When Mayor Mike Perros surprised Craig with the key to the city, Craig said, “Oh, it’s gorgeous, thank you so much,” and humbly lowered his head.

The City of Danville also passed a proclamation Monday night making October National Breast Cancer Awareness Month 2018. Commissioner Denise Terry, herself a survivor, read the proclamation, which included the reasons why the commission decided to set aside the month.

Breast cancer is the second most commonly diagnosed cancer in both women and men in the U.S., and the second leading cause of cancer death in women. The proclamation states there are an estimated quarter-million new cases of invasive cancer expected to be diagnosed among women and men this year alone in the U.S., with one woman being diagnosed every two minutes.

“Although the statistics are staggering, we are encouraged that survival rates have drastically improved due to increased awareness and innovative advancement in early detection and treatment,” Terry read. “We encourage everyone to display their support … by displaying bold, pink ribbons … for breast cancer survivors and reaffirm our commitment to raising awareness of the disease, and as a symbol of hope.”

In another proclamation, the city deemed Oct. 7-13 National Fire Safety Prevention Week. The proclamation states home fires killed 2,735 people in the country in 2017, according to the National Fire Protection Association, and that fire departments across the U.S. responded to 352,00 home fires. It also states that 4 out of 5 fire deaths in the country occur at home each year.

“Working smoke alarms cut the risk of dying in … home fires in half, and Danville’s citizens should install smoke alarms in every sleeping room, outside of each separate sleeping area and on every level of their home,” Perros read.

This year’s theme is “Look, Listen, Learn. Be aware — fire can happen anywhere,” which Perros said serves to remind us that we need to take personal steps to increase safety at home.

• Michelle Gosser, chief financial officer of the city, gave the June 30, ‘18 budget report, explaining it’s a “snapshot of the fiscal year before adjustments.” Both the summary of major funds and general funds showed a flat revenue trend. For major funds, a positive 10.6 percent was seen as the overall variance to the budget, in part due to “fees being slightly over the budgeted amounts,” Gosser said. She said based on the general fund overview, the operating revenue is slightly above budget of 11.97 percent, again reflecting a a flat revenue trend, which reflects the payroll license fee increase for the full year.

“There is a favorable variance in operating expenditures of 17.93 percent,” Gosser said, and added that it should be noted that the general fund had budgeted this fiscal year to spend surplus funds for capital and other operations. “Because of delays in construction, vacant positions and timing issues, several of these items will happen in the next fiscal year.” She said the funds saved for the projects are still being held, going into the 2019 fiscal year.

“The staff did an exceptional job of saving funds for future use,” Gosser said.