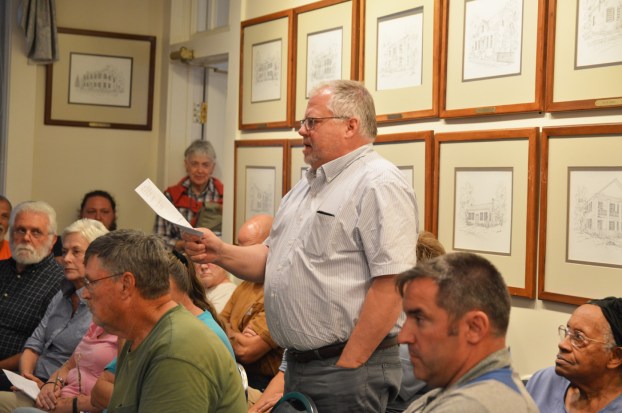 Bobbie Curd/bcurd@amnews.com David Walden, who owns Walden Funeral Home, rebutes statements made by Steven Walker during Thursday's Perryville City Council meeting. Walden is attempting to construct a crematorium in town; Walker leads a group against it.

Perryville rezoning up for approval: Some still object over fear of crematorium

Perryville City Council will consider approval of a comprehensive rezoning project for the city Thursday night. The project is supported by every one of the more than 120 property owners whose properties would be affected. But a different group of city residents see opposing the project as a way to stymie a funeral home director’s efforts to expand his business with a crematorium.

If last week’s council meeting is any indication, Thursday’s meeting could be a contentious one — though the agenda does not provide any time for public comments. Last week, the most vocal opponent of the crematorium and rezoning projects, Steven Walker, read a 10-page letter to the council, continuing despite being told three times by Mayor Anne Sleet that he had exceeded the three minutes he was allotted.

Walden Funeral Home owner David Walden wants to construct a standalone building on property adjacent to his funeral home that would serve as a crematorium, in order to meet increasing demand for cremations, he has said. The Danville-Boyle County Planning and Zoning Commission has approved a site plan for the project, contingent on the City of Perryville approving the rezoning project.

That’s because Walden’s property, which is included in the rezoning project, is currently zoned residential. The funeral home is allowed to operate in a residential zone because it’s grandfathered in — a funeral home has been in operation there for the last 93 years. But a new structure would have to comply with the existing zoning.

Walden and Perryville and P&Z officials say because of the grandfathering, the crematorium could be added to the existing building even if the zone change isn’t approved — a claim Walker and others opposed to the plan dispute.

Walker, who says he represents a group of concerned citizens, has claimed emissions from a crematorium are dangerous to residents who live near it and will reduce property values substantially.

Walker’s speech last week included negative news stories about crematoriums he found on the internet, including two incidents from three years ago in Florida.

Among other claims, he alleged the “powerful and influential funeral home/crematorium industry has ensured” that environmental regulations do not apply to crematoriums.

“That’s more of a local issue,” said Jason McDonald, a public affairs specialist with the EPA. “EPA only regulates waste from industry, or toxic waste. The human body is not a derived waste. There are several things issued by the Cremation Association of North America that speak to that.” 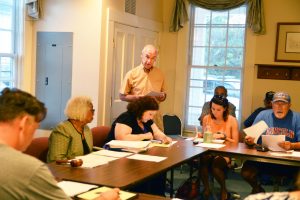 Bobbie Curd/bcurd@amnews.com
Steven Walker reads a prepared statement to the Perryville City Council during Thurday’s meeting, citing reasons he and others are against the construction and operation of a crematorium in town.

McDonald said there’s a standard set for every industry that deals with waste.

“And it’s based on certain things like quantity, but I don’t think a crematorium would ever reach a level of input with a mass that would ever come close to that,” he said.

Walker also took issue with Danville Mayor Mike Perros for expressing support for the proposed crematorium. “I wonder if he would be equally enthusiastic about a crematorium located 4-feet over the boundary from his home, or in downtown Danville?” Walker asked.

Perros said this week he “ would absolutely support a crematorium in Danville and would even go as far to say that I would support one in downtown Danville, as long as it’s not out-of-character with the town” and meets any state regulations.

“Additionally, I would welcome it to the extent that if Mr. Walden wants to purchase the field next to my home, which is a little over 10 acres, I’d gladly discuss it with him,” Perros said. “I am for the growth of Danville because it’s clear to me, as mayor, communities that don’t grow die. And I do not want Danville to die.”

Among Walker’s other claims are that residents in Perryville would be able to hear the crematorium while it incinerates bodies; and see and smell smoke emitted in the process. During his speech last week, he claimed, “Only very limited testing of crematorium pollutants has been conducted, but these show emissions include visible, particulate matter … Far from attracting visitors or new investors to Perryville, the crematorium will damage the city’s reputation. Who will visit the Turtle Derby, the Battle of Perryville Commemoration when the riverside will be a concentration point for toxic emissions? Who would risk opening any kind of café?”

Walker also claimed Walden’s crematorium could burn around four bodies per day and “Perryville will become known as the major corpse-burning center for much of Kentucky.”

But the mayors of two other central Kentucky cities with crematoriums already in operation — Nicholasville and Versailles — say their towns haven’t faced a single issue because of the businesses.

“I’ve been here for six years, and I’ve never heard a thing about it,” Nicholasville Mayor Pete Sutherland said. “I checked with my P&Z fella, who said we’ve had zero complaints. I don’t think anyone cares or even knows.”

Sutherland then made a phone call to the previous Nicholasville mayor, who had served for several years before him and was a member of Nicholasville’s P&Z board. “I wanted to see if he knew of any issues with it way back when — and he says they’ve never had one.”

“I’ve been mayor for five years and no one has ever expressed any concern to me,” said Versailles Mayor Brian Traugott. When asked about “being known” for having a crematorium, property values shifting or any other impacts from having a crematorium, Traugott said, “It’s a non-issue here. We have one, and no one ever talks about it. There could be two for all I know.”

According to the Cremation Association of North America, Kentucky has 26 crematories. CANA’s Executive Director Barbara Kemmis said the U.S. cremation rate in 2017 was 51.6 percent; Kentucky’s was 20.7 percent — or 13,952 cremations out of 46,946 deaths.

Most of the toxins emitted during the process are from plastic on clothing or keepsakes, something funeral home directors are moving away from including, she said.

“Suppliers have changed the way things are made. There is the possibility of these emissions, but most of the opposition to new crematories is rarely based in good science, but rather a ‘not in my backyard’ attitude and fear,” she said.

Dentists are even getting away from using mercury in fillings, opting for porcelain instead, Kemmis said. Fillings are still emitting small quantities of the chemical — but nowhere near the amounts released by other activities such as mining or garbage incineration, she said.

As for Walker’s assertions, Kemmis says, “It’s not that he’s wrong — there are a possibility of these emissions. It just sounds like it’s exaggerated.”

At the meeting, Walker’s speech did not go unchallenged. Council member Paul Webb asked after the speech, “Mr. Walker, where do you get your information that … crematoriums are a ‘toxic waste site?’”

Walker said it’s “widely available in the press” and offered to point Webb to a “one-stop shop website” to review. He then added, “I am currently working with a lawyer.” Webb told Walker if he is working with an attorney, Walker probably shouldn’t say anything more.

Walden also took issue with Walker claiming he would make $1,000 off of every cremation and as much as $1 million annually.

“I believe that,” Mayor Sleet said.

“And I’m not going to make $1,000 per cremation. I’ll make a couple hundred dollars,” Walden said.

Sleet said the council appreciated Walden and his family. The council believes Walden has been good for the city and it plans to “do what’s right by him,” she said.

The Advocate-Messenger asked Walker after last week’s meeting to provide a list of the people involved in his group of concerned citizens.

“I am reluctant to pass any more names to you as they are frankly intimidated by the situation and fear some kind of payback,” Walker wrote. However, he said, it can be deduced from which citizens asked questions during the meeting. “Had the mayor not ‘gagged’ the meeting, more of our group would have asked questions.”

The first 30 minutes of the council meeting were spent on crematorium issue, mostly based around questions from the public, on both sides of the issue.

One resident cited a lawsuit in Toledo, Ohio where a family won against a crematorium; another spoke at length about about property values and the air her grandchildren will breathe, and said she urged the council to consider those things, and that they could “vote against the crematorium” and still respect Walden.

“But this hasn’t come before the council to vote on anything,” Sleet tried to explain. But a resident continued to say “when you do vote for or against it …”

“I want to clarify one thing,” council member Webb said. “We are not ‘voting’ on the crematorium … It’s already been decided by (Planning & Zoning). The only factor that we will be voting on is the overall zone change. And as I’ve stated before … It’s hard for me to say ‘no’ to an overall zone change because there’s other people that’s being affected by this.”

Perrvyille City Council will hold a special called meeting at 5:30 p.m. Thursday at the Perryville Community Center. The agenda include consideration of a rezoning project with possible approval; there is no agenda item for public comments. Kentucky’s Open Meetings Act prohibits public agencies such as Perryville City Council from deviating from the set agenda during special meetings.

The 156th anniversary of the Battle of Perryville was remembered in many ways over the weekend. The annual commemoration, held... read more