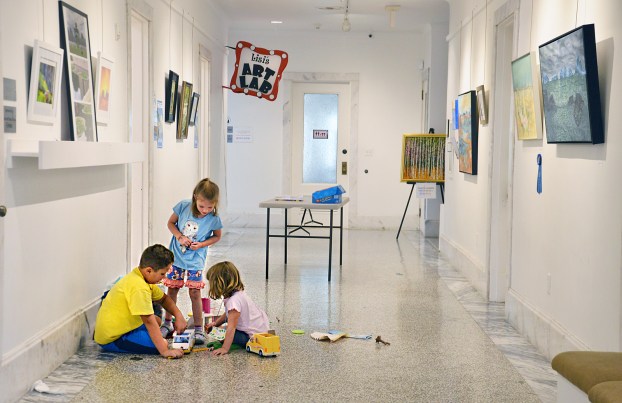 Photo by Robin Hart/robin.hart@amnews.com From left, Nicholas Staples, Ava Wentz and Alana Oquin play with toy cars in the hallway at the CAC during this week's Fall Break Camp. This hallway once led to offices of the IRS and military recruitment centers for the Army, Navy, Air Force and Marines. Today, the rooms are art galleries and classrooms.

The 107-year old federal building, which is now home of the Community Arts Center at the corner of Main and Fourth streets, has a long history of adapting to the needs of the town. And now its history, intertwined with personal stories, has been turned into a tour available to the public.

The Arts Center has launched its “Historically Bold Building Tour,” which provides an audio tour and a print version of the tour, explaining the statuesque building’s history and describing its stately architectural elements. It also features stories from several local residents whose recollections help to make the building’s past come alive.

The self-guided audio tour was researched, written and narrated by Kate Snyder, CAC director of marketing and development. It’s free and takes about 25 minutes to complete. Visitors can check out an iPad and headphones at the CAC’s front desk and begin exploring the building at their own pace. Or they can download the “izi.Travel” app to their own device to hear the tour.

The tour is free in part because of support from the Boyle Landmark Trust. 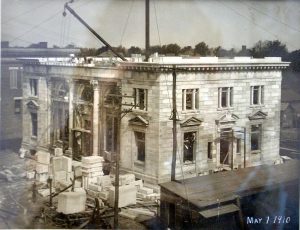 One of several old photos shows what construction of the federal building looked like in December 1910.

Chair of the trust, Jacob Pankey said, “Adaptive reuse — that’s what the Landmark Trust wants. Our identity is in our structures. If you were to try to identify any town, it is by their buildings. They are what stays. But what’s inside of them is where the stories hide.”

The building was occupied in three primary phases: as the town post office from 1911 through 1961, then as a federal building until the mid 1990s, and finally its current use as the CAC.

Pankey said the personal stories that are shared during the tour is a way to connect with the building. “It brings a sense of nostalgia,” Pankey said.

The Landmark Trust hopes more audio tours are developed for historic Boyle County properties. “I hope that this becomes contagious to show off how far Main Street has come,” he said.

CAC Executive Director Niki Kinkade said, “The Historically Bold Building Tour was born out of a desire to share the interesting history of this well known community building. Historic preservation is not only about the building, but about the people, the stories and the culture of a time in history. We are proud stewards of this building and feel that this story really does epitomize the idea of ‘Historically Bold.’”

The first stop of the tour is tucked in a short, narrow hallway and features original photos of the building’s construction. Narrator Snyder explains how Danville received a telegram in 1909, stating it was going to be the site of a new federal building project. The building’s original use was to be the area’s post office. Construction began in 1909 and was completed in March of 1911, at a cost of $63,369.

The next stop takes the visitor outside to view the front of the building and points out its Beaux-Arts style and describes its classic features.

While looking at the building, a local storyteller’s voice talks about why he and other young boys and girls appreciated the building, especially during parades, when they were growing up in Danville.

The narrator leads you back into the grand hall and explains why there is a transition from marble to hardwood floors and what the original post office looked like. Colorful local art on display and for sale greets tour listeners as they walk around the building.

The tour continues with interesting historical facts and hidden features. And more stories are told by residents. One recollection explains why the office building smelled so good at Christmas time.

The building continued as a post office until 1961, when it was turned into use for a federal building that housed offices for the Federal Judge of the U.S. 6th Circuit Court of Appeals Pierce Lively on the first floor, as well as his stately law library.

The tour also takes you upstairs (which can be reached by either climbing the original marble staircase, or riding the modern elevator). Now used as art classrooms, studios and galleries, the second floor once housed offices for the RECC, IRS, county extension and recruitment centers for all four branches of the military.

Lindsey Sweis, an instructor at the Community Arts Center’s fall break camp, encourages her students to start cleaning up after working on an arts project on Wednesday.

This is one of several photos that shows the construction of the federal building. Taken in 1907, this is the site where the building was to be constructed.

During the audio tour, the large marble staircase and cast iron railing are said to be original to the building, which was completed in 1911.

Danville-Boyle County Planning and Zoning’s recommendation for a comprehensive zone change in Perryville was unanimously approved by the city council... read more