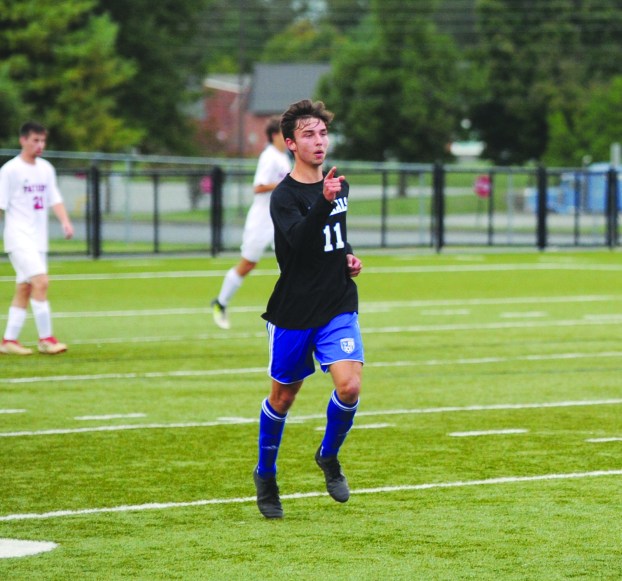 Danville’s seniors knew they could have a special season this year.

The Admirals were special, finishing the year 19-2-1. Danville finished runners-up in the All-A state tournament and 12th Region tournament.

“I think that after last year, we knew that we had the talent to perform well this year,” senior Alec McAlister said. “It was just about putting everything together. We knew we’d have more experience coming in this year, so when we trained we focused on the little things. It wasn’t worrying about too many things at once, it was focusing on the little things throughout the season. By the end of the season, our experience from previous years really helped out.”

McAlister was the leader among a core filled with talent: He finished the year with 21 goals and 12 assists. He’s a player that lives and breathes soccer for 365 days a year, and he’s the Advocate-Messenger boys soccer player of the year.

“He’s been like that since sixth grade when he came from Montessori,” head coach Brent Beauman said. “There’s a lot of people that play soccer a lot. You can see that they kind of get run down or burnt out. But he’s somebody that, this is just a passion for him. Whether he’s coaching his own kids or makes coaching a part of his life, I have a hard time believing Alec would one day not be involved with soccer.”

Soccer has been on the rise in the area — three area teams had players on the All-State list — and McAlister was one of three on the Second Team All-State. Teammate Nathan Hazlett and Lincoln County’s Trey Cummins also made the list.

For McAlister to stand out among that crowd is a testament to his dedication, teammate Keeton Burnside said.

“Alec is a class player,” Burnside said. “You can tell he’s completely dedicated. He’s the most dedicated player I’ve ever played with, most high-intensity player I’ve ever played with as well. In training he always pushes. He’s one of those guys that, if you’re not playing good, he’s going to make sure he tells you. He’s going to make sure that you step it up. He’s the leader that our team needed and played a huge role in all of our wins.”

Beauman said you can tell by the way that McAlister plays the game that he’s a leader and he gives everything he can for a full 80 minutes.

“He’s a captain for two years. That’s the role he wanted,” Beauman said. “Even coming in as a freshman, he was immediately a starter and it was because he needed to be there. It was his actions, you can watch his play and it shows why he deserves to be there. It shows in everything, everything he does, he does at a high level.

“For Alec to stand out on this team and in this area, it’s a culmination of his four years. He’s always been one of the top players. Each year he’s had more and more responsibility and pressure, and he just moves on.”

McAlister was quick to credit his team, full of skilled individuals who were willing to sacrifice for the good of the team.

“It was just a really good group of guys to be around, not just with chemistry, we just really enjoy playing together and I think our styles suited each other,” McAlister said. “We really enjoyed playing possession-style soccer. This year it really worked out because similar guys who work hard and are talented, it all came together one year and worked well.

“It’s worked its way up, it’s been better every year. We’ve had success throughout the years and this year could’ve been that region championship that we really wanted. But definitely winning two district championships in a row, it feels good to finish that way.”

Beauman said that McAlister’s playstyle is the way the game should be played: Technical. Physical. Respectful.

“He just plays hard. When you play Alec, you’re going to leave with bruises, that’s just how he plays,” Beauman said. “People may not think it, but that’s just him competing, being respectful to the game. He’s not doing it to cause harm or be dirty, he just wants to compete, wants the ball, wants to win. People see how hard he plays and how respectful he is, it’s hard not to respect his game and see him do well because he does it the right way.”

By MIKE MARSEE Contributing Writer SOMERSET – There wasn’t a single knockout punch among the series of blows that ended... read more