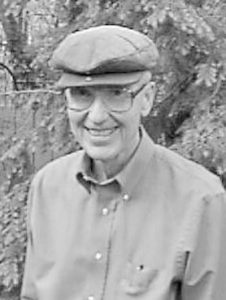 James Lester Clark, 88, of Lexington, Kentucky, escaped the bonds of this mortal plane on November 10, 2018. After suffering continual illness and pain for several years, it was a blessing for him and his family. A man is designed by his creator to be mortal; to be born, to grow, to age, and to die. These words, while true, cannot begin to describe the impact James L. Clark had on the lives of everyone who knew him. He was a model of intelligence, talent, integrity, honesty, and Christian faith.

He is survived by his loving and devoted wife and caregiver of 62 years, Lillian S. Clark; a daughter, Kimberly Hosea and her husband Addison; a son, John F. Clark and his partner, Sherri M. McGee; and his granddaughters, Mary Celeste Clark and her partner, Michael Tyree, Alyssa Sutton and her husband Ron, Kristin Hosea Welch, and Meredith Raybould and her husband Justin; along with seven great grandchildren; and a host of nieces and nephews, along with their children and grandchildren.

James L. Clark was born to John L. Clark and Bertha Holloway Clark in Danville, Kentucky on February 22, 1930, at his home on Harding Street, the next to youngest of six siblings (Jean, Cleo, Madge, Bertha Lou, and Edward) of which he was the last to survive. His father died when he was seven, leaving his mother, a woman of great resolve and faith, to raise the six children during the Great Depression.

He graduated from Danville High School a year early and enlisted in the U.S. Navy. After his service he attended Cumberland College in Williamsburg, Kentucky and later graduated from Centre College in Danville. He was, at various times in his life, a stringer for the Lexington Herald, a sports reporter for the Danville Advocate Messenger, a surveyor, a teacher of music and math in several public schools, a radio disc jockey (which is where he met his wife), a long-time columnist for the Danville Advocate Messenger, a Minister of Music and Christian Education in several Southern Baptist Churches, a webmaster and computer and network technician, and a locomotive engineer for the Norfolk Southern Railroad. He was a member of First Baptist Church in his youth and later a longtime member of Lexington Avenue Baptist Church, both in Danville.

James L. Clark was an exceptional raconteur with a great sense of humor, often regaling his friends and family with stories from his childhood during the Great Depression and World War II and many wild and wooly stories of his days on the railroad. He was a true renaissance man. A talented musician, over the course of his life he composed over 110 hymns and pieces for solo voice. From the age of 70 until the time of his death, he wrote and published 19 books, including novels, collections of short stories and poetry, and a treatise on theology. During his time as a columnist for the Advocate Messenger, he wrote hundreds of columns on local, state, and national politics. He was the self-appointed watchdog on local city government, the school board, and the Planning and Zoning Commission, bringing transparency and light to the operations of these agencies, to the chagrin and delight of the citizens of Boyle County. In his later years he was a prolific blogger on many of the same issues.

The family extends its heartfelt thanks to the staff of fifth floor north Baptist Health for its skill, caring and diligence. A private service for family members was held at Lexington Cemetery on Wednesday, November 14th, with arrangements by Milward Funeral Directors.

To share a remembrance of Jim or offer condolences to his family, please visit milwardfuneral.com.