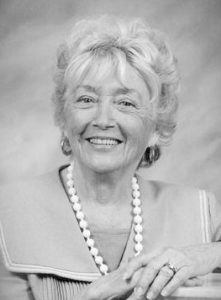 Dr. Pearl Black Rutledge passed away on November 17, having lived a life filled with the joys of living, loving, learning and giving. She was preceded in death by Coach Edward Rutledge, her husband of 53 years. She was born in New York City on October 14, 1927, the daughter of the late John and Harriette Black.

She had a long, multifaceted, fascinating career as a dancer, teacher, psychotherapist, wife, mother, and always, a servant of God. She appeared on Broadway at age 14, and during World War II performed in USO Camp Shows, where she met a married Lt. Commander Edward Rutledge, a U.S. Navy Aviator. After marriage, the couple moved to Kentucky, where Pearl completed a BS in education from Western Kentucky University, an MA in counseling from Murray State University, a PhD in Counseling Psychology from the University of Kentucky and studied at the Lexington Theological Seminary. She was a licensed psychologist in Kentucky, a senior trainer and consultant for the American Management Association, and worked for 25 years with companies such as IBM, General Foods, Gillette, Hanover Breads and Tom’s of Maine, where she subsequently served on the Board of Directors. She was also listed in Who’s Who in the South.

She and her husband made their home and friends in many places during his career as football coach in Kentucky high schools, the University of Kentucky and with the Baltimore Colts and New York Giants of the National Football League. She served on the faculty of Centre College, Danville and Pace University in New York. In life “after football,” they returned to Lexington where she conducted a thriving private practice as a psychologist and directed the Gestalt Training Center of the Bluegrass. Joining the carried threads of her life, she offered workshops incorporating psychology and the arts, and the intersection of psychology and spirituality. After official “retirement,” a great joy of her life was the spiritual book group she led in her home, and the lively community of Heritage Place.

She was preceded in death by her sister, Barbara Black Thomas, of Palm Beach, Fla.

She loved her family dearly; her many friends brought great joy and energy to her life. Both family and friends will miss her presence in their worlds as she “goes to see what my Lord has in store for me next.”

In lieu of flowers memorial contributions are suggested to Hospice of the bluegrass, 2312 Alexandria Drive, Lexington, KY 40504. Kerr Brothers Funeral Home-Harrodsburg Rd. is in charge of arrangements.