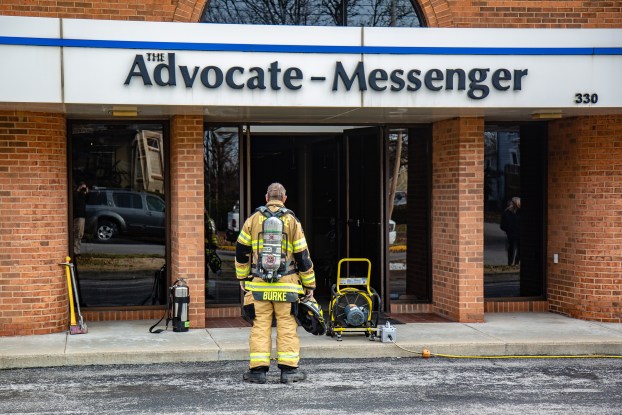 Ben Kleppinger/ben.kleppinger@amnews.com A Danville firefighter stands outside the front of The Advocate-Messenger building on South Fourth Street Thursday, as the building is cleared of smoke. A wreck at the intersection of South Fourth and Figg Alley caused a power outage in the building that led to a small motor in the basement overheating.

A two-vehicle wreck at the corner of South Fourth Street and Figg Alley Thursday morning caused a power outage and fire hazard in the building where The Advocate-Messenger is located. The building was evacuated briefly, and a temporary newsroom had to be set up at a local hotel in order for the staff to continue working on Friday’s edition of the newspaper.

At around 10:15 a.m., Willa Mills of Danville, was driving a 2004 Buick SUV heading south in the right lane on Fourth Street, when she attempted to make a left hand turn onto Figg Alley, according to Danville Police Officer Clark Logan. The vehicle collided with a 2002 GMC box truck traveling in the left lane that was heading in the same direction on the one-way street. The box truck was driven by Johnathan Hopkins of Lancaster. The wreck caused the truck to crash into a utility pole outside the newspaper’s office.

The impact caused the wooden pole to split vertically and knocked out two phases of the three-phase electrical line. This in turn caused most of the power to go out inside The Advocate-Messenger building, but left some lights flickering.

Police said the truck’s driver’s side window was completely shattered and Hopkins was taken to the hospital due to possible neck injury. There were no other injuries reported.

While police and first-responders were directing traffic and making the accident report, an Advocate-Messenger employee told police that fire alarms were going off and there was a strong smell of smoke inside the building.

Battalion Chief Mike Mulholland and several of his firefighters checked out the building and discovered that a small motor in the basement was overheating and on the brink of catching on fire.

Once the breaker was located and all power was turned off inside the building, the threat of fire was over, Mulholland said.

Because the power was shut off and phones weren’t working, Advocate-Messenger Editor Ben Kleppinger and Publisher Mike Caldwell made arrangements for the newsroom staff to pack up computers and set up a temporary office in a conference room at the Holiday Inn Express.

“The newspaper comes out no matter what,” Kleppinger said. “When the big ice storm hit in 2009, a skeleton crew worked off of a gas generator to put out a four-page black-and-white paper several days in a row. This isn’t anywhere near as big a deal, so we’ll take it in stride.”

Power was restored later in the day and the staff was able to move back into the office at 330 S. Fourth St. Thursday evening.

The South Fourth Street wreck wasn’t the only activity first responders dealt with Thursday morning. Mulholland said the fire department had just returned from a call where a medical emergency required them to force entry into a home and help a patient when the call for the wreck came in. And while directing his crew at the Advocate’s office, another call came requesting assistance in getting a boy out of a tree.

He sent Engine 12 and its crew to help a 6-year-old boy who had climbed up a tree to get a cat and they both couldn’t get down. Firefighters set up a 16-foot ladder and got the boy down, then set up a 24-foot ladder and retrieved the cat.

“We’ve been busy today,” Mulholland said, before noting “everybody is fine.”

Weimaraner will be grand marshal for Perryville Christmas parade

The City of Perryville is inviting everyone to “Come home for Christmas.” At 6:30 p.m. on Friday, there will be... read more