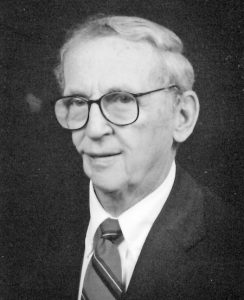 Dr. Ramey was raised on a dairy and tobacco farm and graduated from Mt. Sterling High School in 1946. He then attended and graduated from the University of Kentucky in 1950 with a major in Zoology. While attending UK he played musical percussion instruments in the marching band. Subsequently Dr. Ramey attended Duke University School of Medicine and graduated in 1954, he then had a rotating internship in 1955 at Denver General Hospital, Denver, Colorado. Dr. Ramey served in the U.S. Air Force as a General Medical Officer from 1955 through 1957 and in a family practice residency in Bluefield Sanatorium, Bluefield, West Virginia in 1958. He was in solo family practice in Danville from 1959 to 1978 and in a three-man partnership practice in Danville from 1978 to 1988. Dr. Ramey had various short-term “vacation practices” across the years while active in Castiner, Puerto Rico, 1969 and 1971; Santa Rosa, Honduras, 1977 and the Navajo and Sioux Indian Reservations, 1969, 1982 and 1991. Dr. Ramey served as Boyle County Coroner from 1965 to 2010. His term as Boyle County Coroner is the longest continuous term of any elected official in Kentucky. He was a founding member of The Advocate-Messenger Brass Band which was formed in 1987.

Dr. Ramey is predeceased by a brother, John Robert Ramey.

The funeral service will be 1 p.m., Thursday, December 13, 2018 at First Christian Church.

Rev. Joey Pusateri will officiate. Burial will be in Bellevue Cemetery.

Memorial donations are suggested to The Salvation Army, Heritage Hospice or First Christian Church. The online guestbook is available at www.stithcares.com.