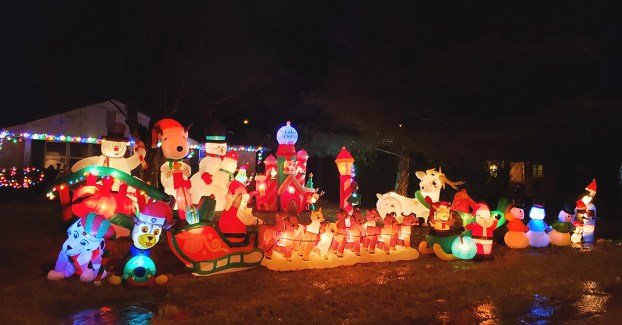 Photo submitted Jeremy Edwards is inviting everyone to drive by his home on West Jefferson Avenue to enjoy the sights and sounds of Christmas. He said his display is larger than last year's and next year will be even bigger. Not only are their several whimsical inflatable yard decorations, Edwards has also synced Christmas music through speakers that cause the lights to flash in rhythm.

The creator of an “extreme” Christmas yard display in Danville is inviting everyone to drive by and enjoy the sights and sounds of the holidays he’s been working on.

“I never thought I’d go as extreme as I did,” said Jeremy Edwards, 39, who lives on West Jefferson Avenue off of Lisa Avenue on the south end of town.

His Christmas wonderland started modestly last year when he put up an inflatable Santa and helicopter display he picked up at Lowe’s. After two nights in the yard, Edwards overheard his neighbor comment about how much his 3-year-old daughter “just loved it.”

Edwards said he thought to himself, “Oh, that’s pretty cool.”

So he went out and bought another large inflatable decoration.

This year, he’s continued adding to the scene. “Oh, heck yeah, it’s bigger this year,” he said. And it just keeps growing because he’s always on the lookout online and in stores for fun, Christmas-themed inflatables to add.

Edwards said he likes to feature Christmas characters that he enjoyed as a kid.

“I never thought a magical Christmas display would inspire somebody so much,” he said.

Now he wants to make his display bigger and better every year in the future.

And he wants to share his his “magical” display by inviting everyone to drive by his home and enjoy the scene.

In addition to all of the whimsical decorations, Edwards hung lights on his house and connected them to a device that plays Christmas tunes in sync with the lights, causing them to flash in rhythm.

“It is my pleasure to do it,” Edwards said.

The Advocate-Messenger will be publishing photos of local lawns and houses decorated for Christmas on Dec. 22. If you know of a home or other location that is particularly impressive, email the location to advocate@amnews.com or call (859) 236-2551 and leave the information.