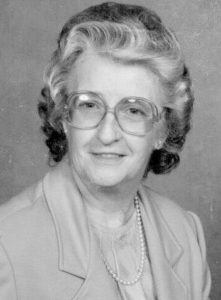 Born on November 21, 1929, to the late Lucian A. Jenkins and the late Helen Marie Reed Jenkins. She was the widow of the late James Craig Carrier and the late Jake Walters. She was a member of Fairview Baptist Church in Waynesburg, Ky. She taught Sunday school at Mt. Moriah Christian Church. During her life she had worked as a seamstress at Palm Beach in Danville, Ky.

In addition to her parents and husbands, she was preceded in death by one son, Mike Carrier; and three brothers, Kenny Jenkins, Carl Jenkins and Jim Jenkins.

In lieu of flowers, donations may be made to the Mt. Moriah Christian Church Cemetery Fund.