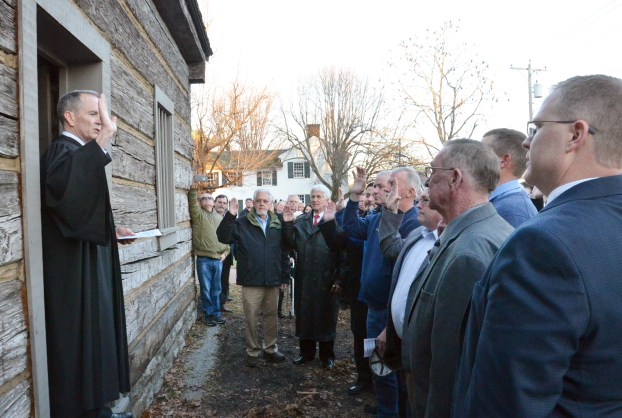 Seventeen of Boyle County’s newly elected officials made history by gathering in front of Kentucky’s first courthouse at Constitution Square and took their oath of office in a non-partisan ceremony Monday evening.

A large crowd of family members and well-wishers were also there to witness “history in the making,” according to Boyle County Judge-Executive elect Howard Hunt.

He said the ceremony was special because it was being held at “the birthplace of Kentucky.”

He added that he was also impressed that Gary Chidester, who opposed him in November’s general election and lost by only 15 votes, was also attending the event. He said that showed how Chidester is supportive of not only the office of judge-executive, but of Hunt as well. 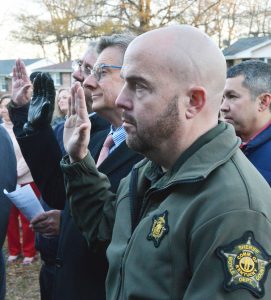 “It’s a compliment to him,” Hunt said.

Presiding over the ceremony was Kentucky Supreme Court Justice Laurance B. VanMeter.

Boyle County Republican Chair Tom Tye said, “We understand that this will be the first such ceremony in perhaps more than 100 years” at that location.

“This Danville/Boyle County setting has extraordinary significance,” he said.

The original log courthouse was built at Constitution Square site in 1784 and housed the Supreme Court of the Kentucky and the Constitutional Conventions which led to Kentucky’s statehood in June of 1792.

Tye said after the swearing in that he knew it was going to be a large crowd and estimated it to be between 100 and 150 people.

“I’m pleased that it’s such a diverse crowd,” he said, referring to Democrats and Republicans who attended.

He added that “it shows unity” within the community and of the elected officials. “I think this bodes well. I really think it does.”

Speaking to the crowd surrounding the old log courthouse before the ceremony, Tye said, “These guys have to swear they have never fought a duel, and you’re going to have a little chuckle there.”

Then VanMeter added, “The anti-dueling part comes in from the 1850 Constitution. So we’re under the 1891 Constitution right now. And I promise you it’s been countlessly debated in Frankfort … all the time,” because it seems to be an anachronism or antiquated oath.

“But what it really does is it signifies our respect of the rule of law and that we do not commit our differences anymore to the duel of fire. We submit them to the court system. So when I get to the dueling part, everybody likes to snicker — like you’ve already done. But I would ask you not to do that and think about what the purpose of it is and how long it goes back in our tradition.”

A group of newly-sworn in public officals faced their friends and family after the ceremony presided by Kentucky Supreme Court Justice Laurance B. VanMeter.

Kentucky Supreme Court Justice Laurance B. VanMeter applauds the group of men he had just sworn into office on the step of Kentucky’s first courthouse at Constitution Square.

Before the swearing in ceremony of several Boyle County elected officials Monday evening, Kentucky Supreme Court Justice Laurance B. VanMeter, far left, explains why the mention of a duel is important to the oath of office.

Kentucky Supreme Court Justice Laurance B. VanMeter and Boyle County Judge-Executive Howard Hunt pose for a photo Monday before the swearing in ceremony of 17 elected officials.
You Might Like

Editor’s note: This is the third in a series of stories highlighting discussions during a recent Danville City Commission/management team... read more