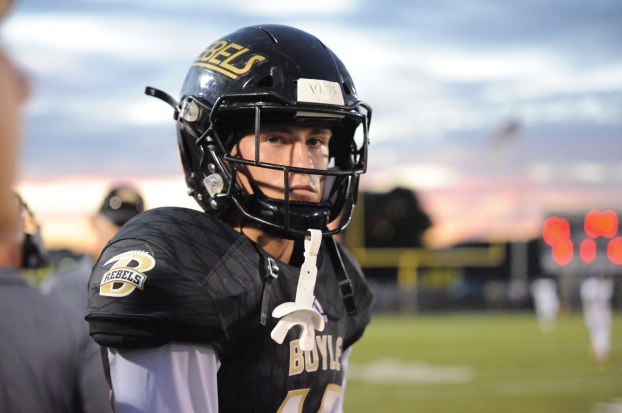 He’s coping with Boyle County’s shutout loss to Corbin in the Class AAA football semifinals but junior Reese Smith is not close to being over the defeat that kept Boyle from winning a second straight state championship.

“I think it shocked everybody, too. Defense played good enough to win but offense struggled all night. We couldn’t move the ball. When we didn’t score, I was stunned,” Smith, a receiver/defensive back, said. “To hold us to zero points was something special for them. They were the better team that night.

“They knew what was at stake and they wanted it bad in the rematch (from last year’s state final). This is something we are never going to forget and my class is going to make sure this will never happen again.”

Smith re-broke a bone in his wrist the previous game at Belfry playing defense. He knew immediately it was broke but continued to play despite the pain.

“I think my adrenaline was rushing and I knew we had to win, so I was not going to let down,” Smith said.

Same with the game at Corbin. No way he was not going to play. He delayed surgery until the week after the game. Normally he would be playing basketball now, but he hopes to be on the court by mid to late January.

“I enjoy basketball but football is what I have loved since I was a little kid,” Smith said. “I wanted to play football since I can remember and once I did play, I just fell into love with it.”

It was a good choice because he already has eight Division I scholarship offers, including ones from Kentucky, Louisville, Duke, Tennessee and Troy. He had 53 catches for 1,173 years and 20 touchdowns this season in 12 games and led the team with 126 points. He also had 55 tackles and three interceptions, including one he returned for a touchdown.

He made an unofficial list to Duke last weekend after getting a visit from Duke receivers coach Gerard Parker, a Kentucky native who played at UK.

“They use a slot guy and throw it around a lot. Their offense is really good and I like what they do. I feel like I have a good connection with their coaches,” Smith said. “Coach Parker is from Lawrence County, so he knows where I come from and all that good stuff.”

Troy coach Neal Brown, a former three-sport standout at Boyle, also knows plenty about where Smith comes from. Brown even played at Boyle under current Boyle head coach Chuck Smith and then also played at UK.

“ I love coach Brown. We went down there for camp and he offered me during the summer,” Reese Smith said. “What he’s doing there is tremendous. He is winning and doing what he has to do to put Troy on the map. We have a good connection, too, and he likes to throw the ball around.”

He’s always been a Kentucky fan and says the UK offer was “special” to him and his family. He’s made numerous visits to UK. He’s being recruited  mainly by secondary/special teams coach Dean Hood.

“I love talking to him. I could talk to him every day,” Smith said. “Their facilities are nice and I am amazed every time I see them.”

He also visited Tennessee this season when the Vols hosted Florida with over 90,000 fans at the game.

“The atmosphere is ridiculous. They sing Rocky Top a lot. The fans go nuts and the facilities are nice and they treat you real good there,” Smith said. “The game was sold out and the place was really rocking the whole time.”

Smith said proximity to home will not overly influence his college choice.

“I am not a kid who gets homesick. I will go where it feels special to me,” the Boyle junior, who plans to commit before his senior season starts, said.

Western Hills standout Wandale Robinson, who won all the state’s major individual awards this season, says he feels Lexington Catholic quarterback Beau Allen and Smith have to be two of the frontrunners for 2019 Mr. Football.

“I keep  that it in the back of my head but my No. 1 goal is win a state championship. It would be great to win awards, but I really want to win state,” Smith said. “That is our expectation and we think we can definitely do it.

“We set high expectations. We want to go undefeated. Our schedule will be hard but I love competition. I feel like when we play better teams, I play better and we perform at our best then. That drives us to be better on the field and winning state again definitely is driving us already.”

Hayley Hellyer back on the Boyle County sidelines

Boyle County girls’ basketball has a familiar name on the bench this season. Hayley Hellyer has returned to the Boyle... read more