W.H. Silliman, a Danville businessman, opened a billiard parlor and bowling alley at 303 W. Main St. in the early 1900s, according to articles in The Advocate-Messenger archives.

Silliman purchased the Star Bowling Alleys in 1904 from a Mr. Patrin of Lancaster and kept them in storage until he opened his own business. His new business would be known as Manhattan Bowling Alleys and he planned to install an up-to-date lunch counter in the same building.

In August 1904, Silliman closed the alleys for a short time until the counter was installed.

His plans called for a hot lunch after 8 o’clock in Danville, “something unheard of for several years.” 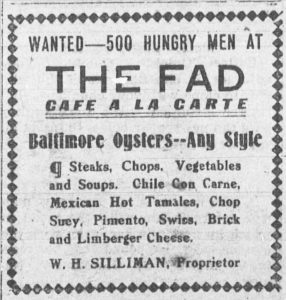 The Advocate-Messenger archives
Advertisement for “ The Fad” restaurant at 303 West Main Street.

He had a scheme on foot that would be a source of pleasure to lovers of the bowling game in Danville, he announced in October 1904. He planned to organize a bowling league with six teams made up of Danville players.

Each team would have five members and select its own name and elect a captain. A small initiation fee was collected from each of the 30 players. And Silliman planned to give prizes for high scores.

An announcement on Oct. 1, 1909, states the business had been remodeled and would be open the next day.

“The establishment has been remodeled in the past three months and is “certainly a place of beauty.”

A restaurant — The Fad — and billiard parlor were on the first floor. “The room is finished in Flemish oak and is not only handsome but all equipment is strictly new and up-to-date.”

Three new bowling alleys were installed in the basement, which was as large and as elegantly appointed as the first floor. Both rooms were scrupulously clean and the place was a credit to a much larger city than Danville, according to the article.

Silliman had rules for his drinking customers, and took the initiative to clear his place of habitual drinkers and drunks. He posted in his business that people coming into the establishment under the influence of liquor would be reported to the chief of police, who would eject them from the premises.

At one point, a petition circulated to get Silliman’s license taken away by the city, which issued the business permits.

In December 1915, he issued a statement in The Advocate, explaining the way he conducted business.

He said he ran an orderly and moral place. “I have conducted this place on a high standard and have done all that a man could do to carry out his plan. I do not run a low down place or ‘hell hole’ as has been said of me. I sell not intoxicating drinks nor do I sell any drinks that contain alcohol whatsoever. There are no gambling games attached to this place.”

He added that if parents did not want their boys to come to play billiards, they should notify his place and he would not refuse their requests.

“I also invite the ministers and mothers to see what kind of place this is.”

Silliman, apparently a cigar smoker, got into the cigar business in November 1910.

He manufactured the Fad Cigar for his own special trade. The box was adorned with a handsome picture of the interior of the Café. The new “cigar has already become the fad among a large circle of fastidious smokers,” he said.

He also added an automatic piano in the Fad Café.

Silliman was not only a champion bowler, he was active in the community.

When the Catholic Church held its annual picnic in June 1903, he “won the prize for the ugliest man on the fairgrounds, and the decision was a most popular one.”

He and his buddy, John C. Eastland, also had their hands bitten when trying to catch a greased pig.

Silliman decided to close his business and sell all of the equipment, according to an advertisement in December 1918.

Nicholas London took a 15-year lease on the building formerly occupied by Silliman.

He planned to have the interior of the building completely remodeled and modernized and will open a billiard parlor and lunch parlor. He expected to spend $15,000 on the improvements and equipment, according to an article a few days later.

Silliman sold the bowling alley and store to L.J. Maninni.

He and his wife lived there 18 years before moving back to Danville.

Many options to consider when looking into frame restoration

Question: OK Jerry, talk to me about frames. My family is very blessed to have a good number of nice... read more