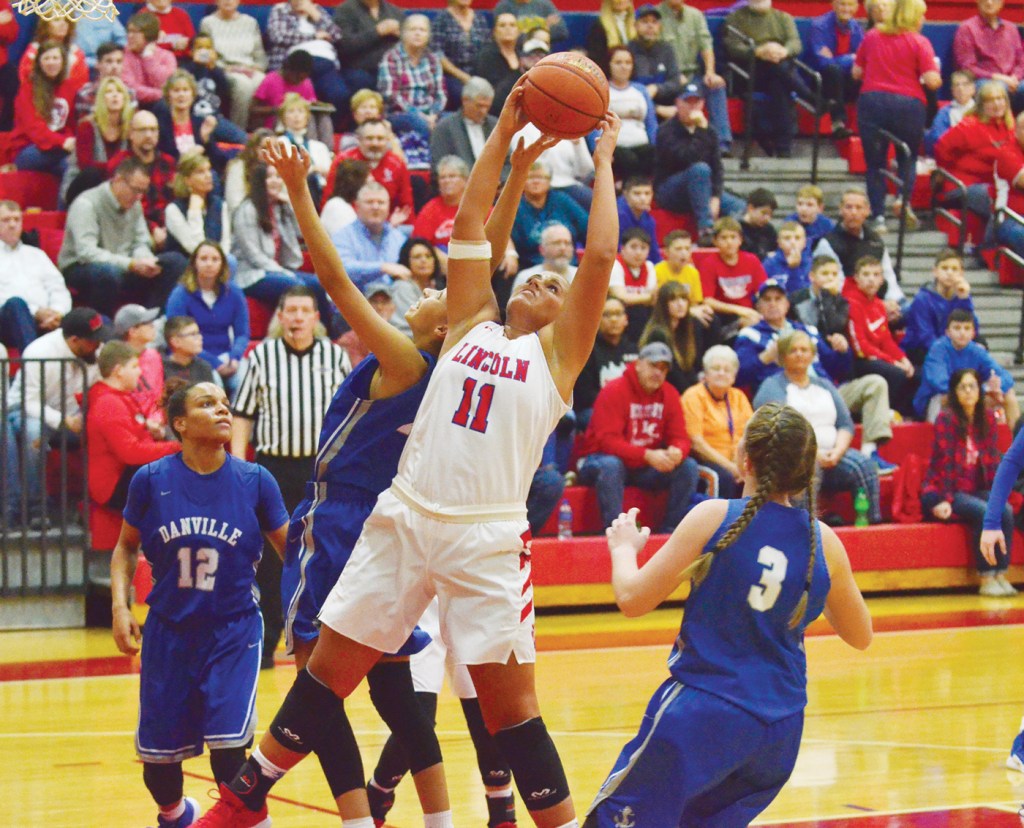 STANFORD — Kaitlynn Wilks scored a team-high 24 points, Emma King poured in 21 points and Zaria Napier and Maddy Boyle both tallied 13 points as the Lincoln County girls kicked off the new year with a 79-64 win over visiting Danville in the 45th District opener for both.

“As I’ve said before, I like getting three or four players in double figures. But we’re hard to beat if we can get four in double figures, and we had four tonight,” she said. “And we had Kaitlynn and Z both with double-doubles.”

Wilks and Napier both crashed the boards for 10 rebounds as the Lady Patriots improved to 10-2 overall, 1-0 in the district.

The Lady Patriots and Lady Admirals were embroiled in a close battle early, with Lincoln showing a slight edge, 20-17, at the end of the first and up nine at the break. Danville used a 10-4 third-quarter run to trim an 11-point deficit to three but would get no closer. Lincoln led by as many as 21 points before posting the win.

Despite the loss, Danville coach Judy Mason saw positives in the district game.

“I was pleased,” she said. “I’ve had this team three months. This is the same team as last year and both times it was a running clock. Last year, the combined loss was 66 points. We cut it to three there so I was pleased with the way we competed.”

“In my opinion, (Lincoln) is the best team we’ve played and the best team in the region. Like I told the kids, this is where we want to be in two months, so I was pleased.”

Lincoln held the first lead of the game with Wilks kicking off the night’s scoring with a bucket in the paint. Ivy Turner answered inside for Danville to even the game at 2-all before Wilks hit again. Lara Akers would give the Lady Admirals (11-3, 0-1) their first lead, 5-4, with a 3-point shot. Wilks sank a free throw for another tie but Ahyana Burnett hit inside to edge Danville back on top 7-5.

That would be Danville’s last lead of the game.

Napier tallied her first bucket off a Trinity Shearer assist at the 6:05 mark of the first to set off a 13-1 Lady Patriot run. King scored six points in the run, Boyle had a 3-pointer and Wilks hit inside to give Lincoln an 18-8 lead.

Danville came back on Lincoln with its own run, outpointing Lincoln 9-2 to make it 20-17 at the end of the first. Desiree Tandy scored on a putback to start the run, Akers and Burnett followed with back-to-back 3’s and Turner added a free throw toss.

Lincoln led by as many as 12 points in the second quarter, with Boyle draining two 3-pointers in the frame and Napier hitting her own trey with 2:18 left in the first half for the 37-25 lead.

Akers hit inside for Danville’s first bucket of the second quarter but it was Ivy Turner, who finished with a game-high 28 points with nine rebounds, carrying Danville in scoring as the senior guard scored 12 of the Lady Admirals 14 points in the period. She outscored Lincoln 6-3 in the final minute of the half to get Danville within 40-31.

“She’s going to get hers,” McWhorter said of Turner. “You know going in that she’s their leading scorer and she’s going to try to get to the rim. You talk about keeping her out of the paint, but she’s a great player and really good at what she does and that’s getting to the rim and getting to the free-throw line. I’d like to see us do a better job of slowing her down and getting so far down in paint. When we picked up our defensive intensity the ballgame switched there for our favor once we started pressuring a little more.”

Danville, which was left playing catchup for much of the game, would get within three points midway through the third quarter. Lara Akers, who finished with 18 points, scored six points as the Lady Admirals battled back, including hitting with 4:01 on the clock to make it a 44-41 game.

But Lincoln reopened an 11-point lead and took a 56-48 lead into the final frame where the Lady Patriots posted their biggest lead of 79-58.

“I guess that’s youth, starting four sophomores,” Mason said of playing from behind. “We’ve been doing that a lot. They’re intimidated. You (Lincoln) start four seniors that all of them have signed to play college ball. That’s intimidating.”

“For us to come back and get it back that’s what I was pleased with. They fought. We fought to the end. It was a closer ballgame than 15 points. We hit our free throws and it’s down to the wire.”

Lincoln, which was just 4-for-6 at the line, shot 54.6 percent from the field, going 35-for-64 overall. The Lady Patriots were able to open up a big lead on the Lady Admirals in the second half behind a 70.3 percent (19-for-27) shooting effort over the third and fourth quarters.

McWhorter said she needed her team to pick up its offensive effort the second half after too many missed shots and too many turnovers – eight.

“You come into half-time and you’re up nine or 10 but it feels like it should have been more. We had a lot of easy shots that didn’t fall for us down in the paint and we had more turnovers than I would like the first half,” she said. “I thought we had a gut-check the third quarter and came out and picked up our defensive intensity and did a little bit better job there.”

“You gut out the win and get a good district win. It’s a good win any time you can get a district win and start 1-0.”

Danville scored the last six points of the game, with Akers, Tyliah Bradshaw and Turner scoring a bucket apiece for the 79-64 final.

“Best team in the region by far,” she said. “That’s the best team we’ll probably play all year and it’s where we want to be in March.”