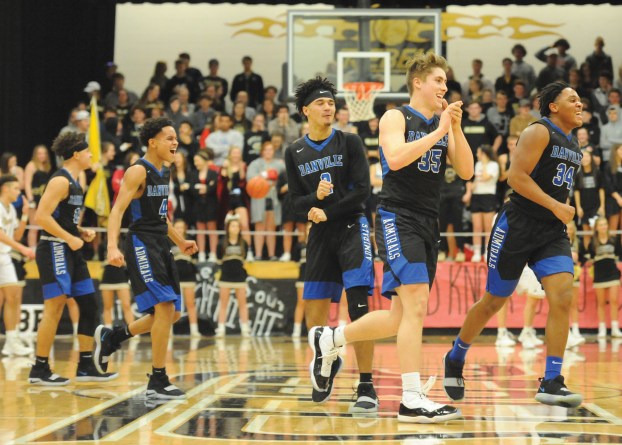 Danville size, shooting too much for Boyle County

Danville imposed its will from the beginning of Tuesday’s boys basketball game at Boyle County.

It was a stellar shooting display in the first half that gave Danville its spark: The Admirals finished the first half 16-for-31 from the field in the first 16 minutes and 7-for-14 from three. Danville won on the glass and didn’t waste many possessions early in the game.

“We should. If we don’t there’s something wrong,” Danville head coach Ed McKinney said. “We’ve got enough size and athleticism, that’s why we’ve been pretty good all year. We’ve mopped up ugly possessions, we can stick it back. I don’t really want to own that offense but we’ve done that a ton.”

Darrian Bell splashed a three from the top of the key to open the game, and scored 11 first-half points for the Admirals. Dante Hayden led with a game-high 16 points at halftime and made four threes.

“Our biggest concern was their 11 offensive rebound in the first half,” Boyle head coach Steve Adams said. “Then when they did shoot, we wanted to get a hand up, tried to rebound. And we didn’t. They went and got it, put it back up and got a number of open looks. It just kind of snowballed from there.”

Danville finished the first half with nine more shots than the Rebels, who didn’t have a player over five points at the break.

The Admirals, on the other hand, had seven different players score in the first half.

“First half we got hot, it’s hard to duplicate that,” McKinney said. “We were so good in the first half, we were getting all of our energy off of made shots. Then we kind of bogged down in the second half, and they can do that, they’re a pretty good defensive team. They do a good job. They shut down lanes so sometimes you’re forced to shoot it, and you don’t want to do that when you’re up. I thought they did better defending in the second half.”

The third quarter slowed down — both teams combined for 17 points — but Danville’s defense continued to limit good looks for Boyle.

Luke Imfeld finished with 13 points to lead the Rebels in scoring. Luke Sheperson and Hagan Webb each added seven points.

“We’ve just got to keep trying to get better,” Adams said. “Young guys are going to have to learn, older guys who have been here a few years are trying to lead us. We played pretty well Friday, then we come out here and had a hard time scoring, missed some easy shots early. We tried to avoid contact instead of going through it. We’re just doing a lot of standing, watching, thinking instead of just playing.

“We knew it was going to be rough especially with Reese and Grant out. We’ve just got to keep working, keep getting better and we’re playing to improve every day and be ready five, six, seven weeks from now.”

The Admirals are winning now, and McKinney said that he likes the way his team has continued to win after a hot start to the season. Danville isn’t sneaking up on anyone, but they’re still winning.

“I thought the first half, we played about as good as we could play,” he said. “This is a big environment. I know now, when you’re not great, you can sneak up on people. But now, we’re getting everybody’s best effort. We’re doing OK against people’s best effort. I think they’re ready to play us based on what we’ve done.”

The win was Danville’s first at Boyle County since Jan. 9, 2009, and the Admirals did it without senior Tevin Kavanaugh. Kavanaugh injured his knee and the initial diagnosis isn’t a positive one.

“Nine people score, that’s what you want. We’ve got a lot of guys on this team that could get 20 if we were just going to them,” McKinney said. “I’ll say this, this win is a little subdued because of Tevin. We found that out today, we don’t know the exact prognosis but it makes us feel different about it. I think we’re all sad. Tevin is a big part of us, has done exactly what we want him to do, and he’s been waiting on playing in this game. That’s sad for me, I hate that for him.”

Danville will take its perfect district record to its home court on Friday when it hosts Garrard County. Boyle County visits Lincoln County on Friday.

HARRODSBURG — Defense wins championships. No one knows that better than the Mercer County girls basketball team, winners of the last... read more