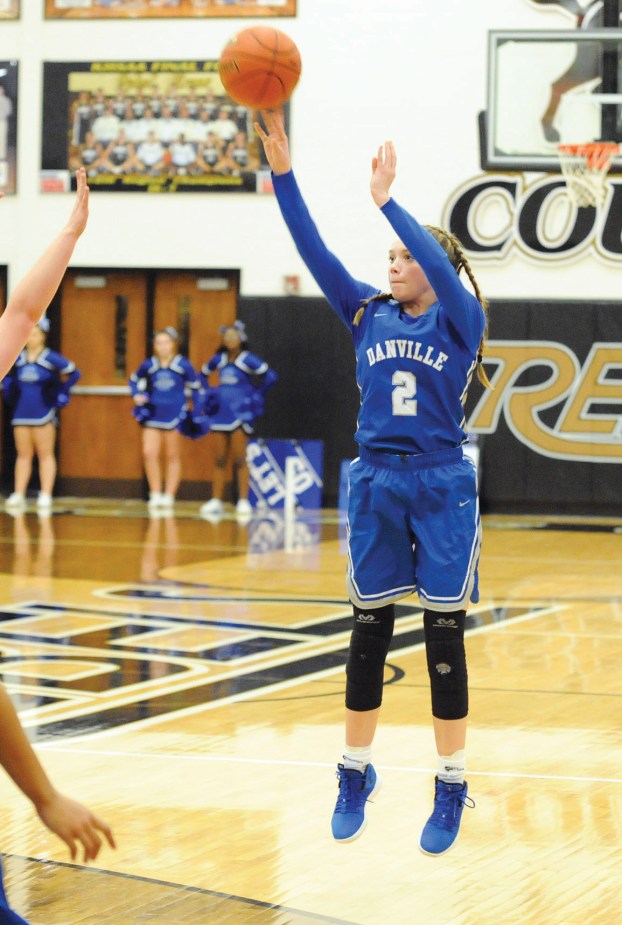 Defense sets tone in second half for Admirals at Boyle

Danville head coach Judie Mason wasn’t happy with her team’s defense during the first half of Tuesday’s game at Boyle County.

The Admirals were dominant against the Rebels, winning 67-41 after an explosive second half.

“We had a little talk at halftime about defense,” Mason said. “I thought in the first half, we’d make a run then let up like we already had the game won. At halftime, my entire speech was about defense and effort. I thought they picked it up in the second half.”

Danville led 37-28 at halftime and exploded for 21 points in the third quarter to take a 58-35 lead into the fourth quarter.

The Admirals’ defense locked in after Mason’s halftime team talk, limiting Boyle to just 13 points in the second half.

“We couldn’t get it going at all in the second half,” Boyle head coach Greg Edwards said. “It was one of those games, we seem to have one of those every now and then. We’ve had some games where our ball movement has been really good, but tonight we didn’t move the ball. When you don’t get anyone involved and it becomes a one-on-one match, you’re not going to win too many games, especially against a team as talented as they are.”

Edwards was excited about his team’s defense against Danville star Ivy Turner — the Rebels limited her to just 15 points — but the Rebels’ offense couldn’t break the Danville press.

“Going in, if you’d have told me that we held her to 15 points, I’d have been fired up because that’s probably a game that we win,” Edwards said. “But their pressure just hurt us bad. We got caught up just dribbling, dribbling, dribbling. Then we got caught just standing and watching. We probably got tired there, game like this is hard because we don’t have a lot of kids with experience in games like this.”

Danville looked the experienced team — particularly in the second half — with pressure and scoring from six different players. Lara Akers led the way with 23 points, 15 coming from beyond the arc.

“I told Lara, I’d stalk Ivy Turner if I were you,” Mason said. “Everywhere she went, I would be her outlet. Because Ivy is going to get where Ivy wants to get most of the time. CJ McPherson used to do that to Essence Grey. That’s what I told her yesterday in practice, and I thought she did that more tonight. Ivy is going to find her, she’s so unselfish and such a team player. I thought in the second half she started running the show like she should.”

Danville jumped out to a 21-11 lead after one quarter, but the Rebels kept it close in the second behind a 17-point quarter. Keely Bowling scored eight of her 10 points in the second frame.

Mason said that her team needs to lock in on defense for a full four quarters over the next few weeks.

“I told them, in the next two or three weeks if we don’t play better defense, we’re not going to reach the goals that we set out for us,” she said. “The All-A is coming up, and I put a lot into that. I want this team to do something that Danville hasn’t done, and that’s win one. I want them to win it all. We’ve got to get better in the next two weeks, and we will. This bunch is coachable. Like I told them, I’m trying to teach them five years of basketball in five months. I think that they’re getting it, but they’ve never been pushed like I’m pushing them. It’s a full-court sprint, we’ve got to get there now.”

For the Rebels, Edwards said his team needs to share the ball more on offense to break full-court pressure and have a more balanced offense.

“Offensively, we didn’t play well enough to win,” he said. “We didn’t get enough shots for Keely. We got a few inside baskets but not near enough. We did not make them have to play tough defense for more than one pass. They basically played one pass hard, then we either got caught up in a double team or we shot the ball. We had to work extremely hard on press offense, had to work hard on defense to contain Turner, then we let them get by on the other end when we were in the half court. Not a good formula.”

Danville size, shooting too much for Boyle County

Danville imposed its will from the beginning of Tuesday’s boys basketball game at Boyle County. The Admirals were dominant... read more