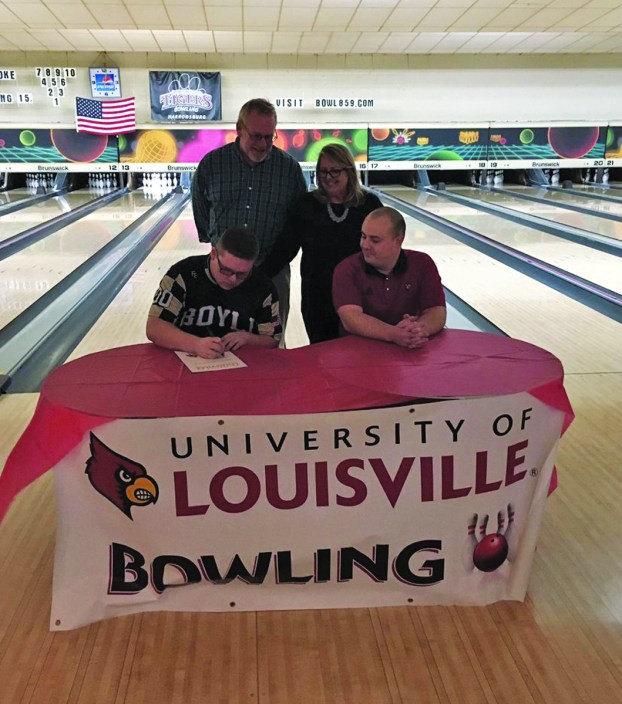 Tuesday was proof. Carter signed to bowl with the University of Louisville after helping the Rebels to a 5-2 victory on senior night against West Jessamine.

The senior joined the Rebels’ bowling team one year after Boyle’s bowling team formed, and five years later is an integral part to one of the top boys bowling teams in the state.

“The first year, I had just started bowling and I didn’t really think I was good enough to join,” Carter said. “Second year was five years ago, this is my fifth year on the team. I haven’t been bowling super long, but it’s a sport I love and I want to do it my entire life. We’ve done pretty good this year, we’re hoping to win regionals again and do well at state.”

Head coach Zach Cooley said that Carter’s story is a great one: He didn’t come in with a bowling background but has built himself into a college bowler.

“He’s meant a lot to this team,” Cooley said. “When we started this bowling team, we had a lot of kids who were bowlers and just became a part of the high school bowling team. Chip was a kid who just walked in off of the street who had never bowled before and has just built himself from the ground up.

“He had no past experience, knew nothing about bowling but in the past five years, he’s went from a kid that knew nothing about the game but took to it, loved it and practiced all the time. Everything he’s done, it’s not something you see a lot.”

Carter said that he chose Louisville for its speed school of engineering program.

“A big reason for me going is the school, bowling is a plus,” he said. “I know the coaches pretty well and I’ve had some experience with them in the past. I think they’re going to have a pretty good team this year. I’m ready for that.

“It’s just a good program, I want to get a good education. I looked at a lot of schools, but being a speed school and getting a masters in five years, I like the idea of that, getting out as soon as I can and getting my life going. Louisville was the best option.”

“They’ve had success in the past and have had a lot of good individuals come through there,” Cooley said of the Louisville bowling program. “Shane Higgins is their coach now and he was a successful high school coach at DeSales for a few years, when the job opened at Louisville I heard his name come up for it. I’ve known Shane for years, bowled a lot of tournaments and things with him. He’s a great guy and a good coach, I expect nothing but big things from them. They’re certainly on the right path with who they’re getting, Chip is a good start for him.”

The Rebels have had their share of success this year, and they’re hoping it translates as the postseason approaches.

“We’ve had a really successful year, we’ve been a lot of places, saw a lot of good teams,” Cooley said. “We’ve won several tournaments throughout the year. We haven’t went any places and hid, so to speak. We’ve gotten out to see what the state has to offer and we’ve been successful. We beat a really good West Jessamine team 5-2, boys and girls, on Tuesday. We’ve got the region tournament here this year on the 26th and 27th, that’s a good stepping stone to get ready for that.”