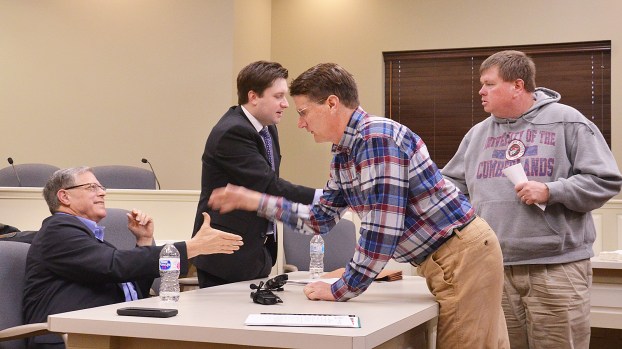 Robin Hart/robin.hart@amnews.com Following an informal meeting to hear comments from the public about they wants legislators to focus on during the upcoming session, state Sen. Rick Girdler (R-Somerset), left and state Rep. Daniel Elliott (R-Danville) greet two of their constituents at Danville City Hall Wednesday morning.

A possible payroll tax cap, how to battle the drug epidemic and legalization of marijuana were just a few of the topics discussed during a public meeting with state Sen. Rick Girdler (R-Somerset) and state Rep. Daniel Elliott  (R-Danville) Wednesday morning at Danville City Hall. Mayor Mike Perros hosted the event.

Among the nearly full room of local residents, a few city and county officials also attended the meeting, as did representatives from the offices of Sen. Mitch McConnell and U.S. Rep. Brett Guthrie. 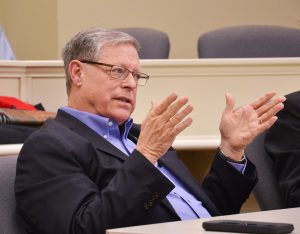 The possibility of Boyle County bumping into an occupational tax cap came up several times. Since Boyle County’s population is predicted to top 30,000 in the 2020 Census, an old law that only affects counties with 30,000 or more people has the potential to essentially cap Boyle County’s payroll tax revenue from Danville residents — or even zero it out entirely.

Elliott told the crowd he realizes the financial harm the old law would have on Boyle County. He said he has drafted legislation to “deal with the population issue,” but has yet to file it. He said the question will be how to handle the situation — whether to increase the population requirement or repeal the law completely.

Girdler said he doesn’t think the issue is “on the radar” for many legislators because it doesn’t affect their counties. Therefore, it’s important for Boyle County officials to testify in Frankfort about how the “archaic” law should be altered. “They have to hear personally from you all,” Girdler said.

Jody Lassiter, president and CEO of the economic development group Develop Danville, said if nothing is done about the population limit and occupational taxes collected by the city and county, it would “gut Boyle County’s budget.” He suggested there needs to be some sort of revenue sharing agreement in place between the county and city and asked that Girdler and Elliott jump on changing the legislation.

“It’s going to gore someone’s ox down the road,” Lassiter told the legislators, so it would be best if they found a way to deal with occupational tax legislation that didn’t hinge on population levels.

When asked by an audience member their opinions on whether incarceration for drug offenders or treatment for addiction was the best method to fight the drug epidemic, Girdler said it all comes down to money and that it is cheaper to come up with long-term treatment options for users than it is to put them in jail. 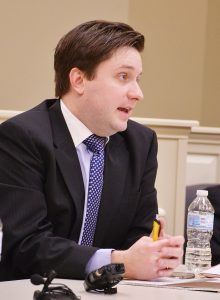 He also shared a personal story about a niece who needed to talk to someone “today” about rehab. He said it was important for former addicts to be “stewards” for getting other people off of drugs.

Girdler also acknowledged that laws in place, such as Casey’s Law and Tim’s Law, that help families and friends get treatment for their loved ones who are addicted or have mental health issues, are not as familiar to the public as they should be.

“If you don’t know about it, you’re not going to use it. We need to put our heads together to publicize it,” Girdler said.

When Girdler and Elliott were asked if they have contacted Sen. McConnell to voice their opinions about the partial government shutdown, both men declined to answer. “We’re not getting into federal issues today,” Girdler said.

One member of the public asked if the legislators had any updates concerning Herrington Lake and pollution that may be seeping into the lake, allegedly from coal ash at the E.W. Brown power station. The commenter asked if Kentucky Utilities could be required to use funding from a rate hike to clean up the lake. Girdler said legislators couldn’t control rate hikes.

Elliott said he hadn’t received any more information about KU’s research into the problem in about two months, but he would check into it.

Both legislators were asked where they stood on allowing people to carry concealed weapons in schools and what chance a proposal to allow it had to get on the floor. Girdler, without any hesitation said, “Zero to none,” as Elliott shook his head in agreement.

Elliott said he was aware that the Kentucky Department of Transportation was looking into a “road diet” for Danville’s Main Street. However, he asked the DOT to consider the public’s opinion before making any final decisions on the project.

On the topic of medical marijuana, Elliott said he was undecided on the issue. He said many callers are telling him that medical marijuana is helping a lot of his constituents. “I’m trying to be open minded about it. I’m a compassionate person.” He said he’s been told that marijuana helps many chemo patients feel less nauseous and allows them to eat. “It’s difficult for me to sit in judgment,” Elliott said.

Girdler said he needs to rely on “experts” to do more studies on the effects of medical marijuana before he can take a stand, but he is willing to listen to what his constituents have to say. He is against recreational marijuana. He said he’s received as many calls about marijuana as he has about the state’s pension crisis. “It really amazed me.”

Several people voiced their concerns and opposition against increased security measures around the capitol building in Frankfort. Many felt that Gov. Bevin put the restrictions in place in order to restrict teachers’ rallies on pension reform. 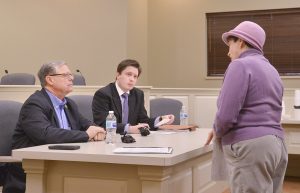 Robin Hart/robin.hart@amnews.com
State Sen. Rick Girdler (R-Somerset), left, and state Rep. Daniel Elliott (R-Danville) listen as Jane Preston delivers them a list of pre-filed bills she would like the legislators to consider when the next legislation session opens on Feb. 5. The two men were at Danville City Hall Wednesday morning for an informal meeting with constituents, which was hosted by Mayor Mike Perros.

Both Girdler and Elliott said they weren’t aware of the security changes limiting public access to them or other legislators.

Elliott said the legislature doesn’t have any input into security practices. The governor makes the decisions based on recommendations from Kentucky State Police and other security agencies.

Another audience member said, “The world has changed and we’re behind the times. … It is normal now to have security.”

Girdler said during last year’s teachers’ demonstrations against the government’s handling of the pension issue, he was fearful of some people in the crowds. “It upped my level of fear.”

“They just wanted their voices heard,” an audience member replied.

“And they got heard,” Girdler said.

He said the entire process of pension reform “has started over.”

“They’re really going to look at everything,” including funding the pension system and making cost of living adjustments, Girdler said.

Elliott said he understands that state employees’ pensions’ “buying power is less and less. I do understand that.”

New Boyle County Attorney Chris Herron says he has applied for a $15,000 grant for a “rocket docket” program in... read more