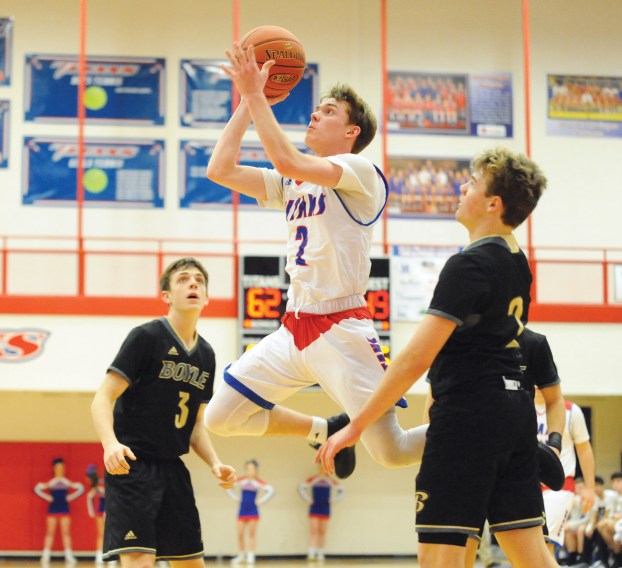 The Titans finished hot as well, downing the Rebels 77-60 behind four different scorers in double figures and 11 makes from beyond the arc.

Carter Baughman led the Titans with 22 points on 8-of-12 shooting and added five assists and four rebounds. Jamisen Lewis had 14 points, Isaiah Smith added 13 and Kaelin Drakeford had 13 points and 11 rebounds.

“Right now we’ve got five kids on the floor who can shoot it,” Mercer head coach Josh Hamlin said. “I think we’ve got three really, really good guards that a lot of people in this region don’t have. We’re able to break you down and when our shooters are hot, they can shoot it. Tonight was one of those nights, they were just needing some confidence. They saw the ball go through the net and it was game on.”

Mercer hit six first-quarter threes and jumped out to a 13-2 lead before Boyle rallied to a 23-18 deficit after one quarter.

“We laid an egg,” Adams said. “Through the course of the year, we’ve been playing real well and I think we thought, to a certain degree, that we were really, really good all of a sudden. Even though we know it’s going to take two or three weeks to get there. We came out here, and I’m not going to say we went through the motions, but we didn’t guard anybody, we didn’t keep anybody in front, we didn’t get after ’em. They kept letting us get back in the game and then we’d do the same.”

Adams said he was fine with his team’s offense in the first quarter — Grant Hotchkiss had 11 of the team’s 18 points — but the Rebels’ defense was never there.

Mercer led 36-28 at halftime, and that’d be the closest score of the second half.

The Titans blew the game open with a 15-2 run to start the second half to kill any Boyle idea of a comeback.

“Our guards did a great job of attacking, people had their feet set, hands ready to shoot,” Hamlin said. “We’ve been needing one of those offensive games. We’ve been playing well, winning with our defense. Tonight our defense played pretty well against a really, really tough opponent to scout and play against with the sets and stuff they run and the personnel they have. It was just a total team effort tonight. Between that start and we came out well against West, it’s encouraging.”

“We just weren’t very good tonight,” Adams said. “Like I told the guys, big scheme of things, we’re learning trying to get ready for the district and region. We learned a valuable lesson tonight, we’ve got to be focused. When we’re playing together, getting after it, we’re pretty good. When we think we’re good, we just go through the motions, think we can just get things done without effort and intelligence, we’re not very good. Just like most teams.

“But we’ll learn from it, practice the next two days. We’ve got two big district games coming up and if we learn from this and it helps us get where we need to be, good for us.”

Hamlin also wants his team to take something from Tuesday’s game: It’s the second win in a row in the region for the Titans, who have Drakeford rounding into form with his second-straight double double.

“Kaelin was not healthy starting off the season, and it showed,” Hamlin said. “Some with his conditioning, some his shot. And that’s unfair to him, we had a lot of expectations and he had expectations for himself. He’s finally starting to get his legs back underneath him, he’s a rebounding monster, does so many other things. He’s one of the better players in the region and I’m glad he’s ready to show everybody that.”

Danville wrestling rebounded after a mid-week loss at Boyle County with some impressive results at South Oldham’s Dragon Invitational on... read more