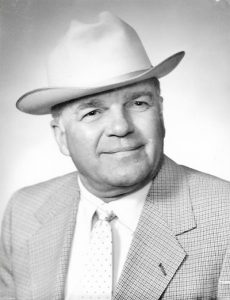 Thomas Edward Cox, formerly of Danville, Harrodsburg and the Eastwood community, passed away on January 23, 2019, at the Nazareth Home Clifton in Louisville, Ky. He was born to Raymond Clayton Cox and Susan Kendall Cox in Yale, Okla., on March 11, 1925.

Tom retired from the US Department of Agriculture, Agricultural Marketing Service in 1985. He was a graduate of Oklahoma A & M University (now Oklahoma State University) with a B.S. in Animal Husbandry, where he was a member of Farmhouse Fraternity. He served as an officer in the US Navy during WWII and the Korean War. He served aboard the USS Stickell DD-888 and USS John W. Thomason DD-760 earning the China Service Medal, Korean Service Ribbon and the United Nations Service Medal. Tom was a lifelong cattleman receiving an award in 2008 from the American Angus Association for 50 years of maintaining a herd of registered Angus cattle. A longtime member of the Central Kentucky Angus Association and the Great Meadows Angus Association, in 2011, he received the Lifetime Achievement Award from the Kentucky Angus Association. Tom was bestowed the honor of Kentucky Colonel in 1971.

Tom enjoyed his cattle and birds, maintaining Purple Martin houses and raising canaries and French Mondain pigeons, which he showed at the Kentucky State Fair for many years. He enjoyed watching the Cincinnati Reds, UK and U of L basketball and football.

He is preceded in death by his wife of 57 years, Audrey Wheeler Cox; a grandson, Daniel Stephen Cox; and his parents.

The family would like to acknowledge the warm and caring staff McDowell Place, Danville, Ky., Nazareth Home Clifton, and Hosparus Health of Louisville, Ky.

Tom bequeathed his body to the University of Louisville School of Medicine. Tom’s family would like any memorial gifts be made to the Kentucky Angus Association Scholarship Program and the Audubon Society of Kentucky.