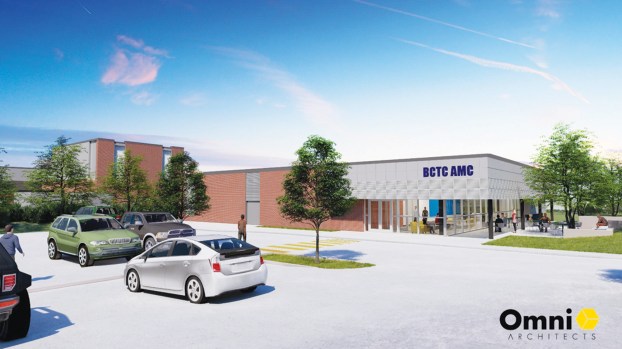 Omni Architects A rendering of the parking lot view of the fully funded åBCTC expansion for advanced manufacturing.

Danville City Commission has unanimously agreed to fund the remaining $78,000 needed for Bluegrass Community & Technical College’s expansion. According to Dr. Erin Tipton, campus director, since the school has now received the required $1 million in matching community funds, it will be able to “pull down” the $2.736 million in grant funding promised by the Kentucky Workforce Initiative.

The funds will be used on the school’s advanced manufacturing project, aimed at increasing the amount of graduates coming out of its industrial maintenance, manufacturing and electrical technology programs. BCTC began working on fundraising for the grant over the last year and a half.

Tipton told the commission when the school moved to its Corporate Drive campus in 2002, the staff immediately realized there would be space issues. The expansion will include an additional 15,000 square feet, with three new classrooms. There will also be four lab spaces with high bay ceilings, robotics and other equipment designed to replicate the industrial environment students aim to secure jobs in. 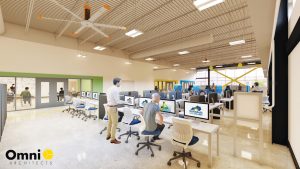 Omni Architects
A rendering of one of the lab spaces to be built in the BCTC expansion for advanced manufacturing.

“This doubles capacity. It increases the amount of skilled workers, meaning increased wages and an increased investment for Danville and Boyle County,” Tipson said.

She said the average yearly enrollment of Boyle County residents is 374 — with just over half of these students traveling outside of Boyle to attend courses, enrolling in an equal mix of technical (47.5 percent) and general education (52.5 percent) courses.

Tipton said that in total, the new facility will provide the capacity to train 180 adults each year, which is a 221-percent increase from current levels. Enrollment of full-time students and associate-degree grads will double each year from 38 to 76. And short-term certificate options will allow part-time students to “re-tool” and upgrade skills in as little as six months.

The “pipeline into training will be strengthened, with capacity for high-school dual credit enrollment increasing to 210 students each year, a 289 percent increase from current levels,” Tipton said.

Tipton presented Kentucky Labor Market information from 2016 on occupational, employment and future employment, which says nearly 800 expected position openings are forecasted in the Bluegrass Area Development District over the next five years, for occupations the new center would produce graduates for. The development district includes 17 counties.

“We know that in Boyle County and the surrounding area, in the next three to five years there will be over 500 positions opening in the area of advanced manufacturing, and electrical and industrial maintenance,” Tipton said.

Roughly 32 percent of employment in Boyle falls into the manufacturing, transportation and utilities industries, and since 2016, nearly $100 million has been invested or committed in Boyle to support new and expanded industry in manufacturing, service and technology occupations, she said.

According to Kentucky Labor Market information, Boyle is currently the 48th ranked county in the state in terms of median household income. High school graduates in Boyle make on average $28,832 annually; those with some college or an associate’s degree make on average $30,616. The projected average income of the advanced manufacturing center’s graduates is $39,672.

Mayor Mike Perros said the project is critical. “Due to all the artificial intelligence coming, the days of working in a dirty, old factory — they are over. There’s a lot of benefit in a facility of this type … I’m on the record of being keenly aware of economic development.”

As Tipton informed Boyle County Fiscal Court last week, which also pledged $78,000 to the endeavor, the city may choose to split the funding up across two years. Michelle Gosser, the city’s CFO, said if it can be added into the budget as of July 1, the full amount should be no problem.

Tipton said the school has been fortunate, and has benefited from such a “diverse group of donors. This didn’t happen with one source … We’ve had private citizens, banking institutions, the Boyle County Industrial Foundation … The community really stepped up from across the board.”

The school has already secured an architect from Omni Architects, a firm out of Lexington.

Boyle District Judge Jeff Dotson has recused himself from a case against two juveniles charged with throwing a rock through... read more