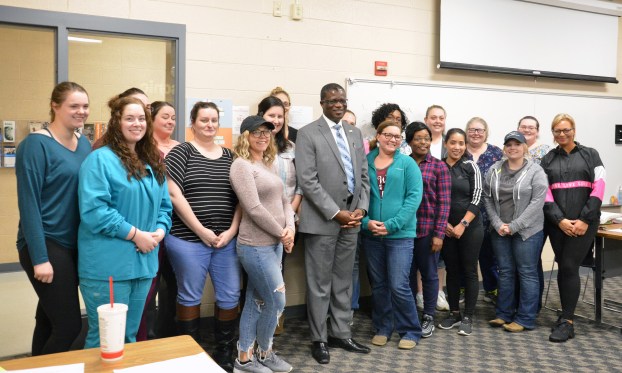 Photos by Robin Hart/robin.hart@amnew.com While touring BCTC Monday afternoon Dr. Koffi Akakpo poses for a photo with a class of nursing students.

During his first official day of being president of Bluegrass Community and Technical College, Dr. Koffi Akakpo visited the area BCTC campus in Danville and met many of the students Monday afternoon.

When introduced to one of the nursing classes, Akakpo thanked the instructor and walked up to each student, giving them an encouraging high five before posing with the entire class for a photo.

Akakpo also shook hands with welding and computer technology students and other staff members while touring the school with campus director Erin Tipton.

After seeing the facility, Akakpo sat down to talk about his vision of the future and how he plans to support Boyle County’s BCTC and the partnerships between its students and employers in the area. 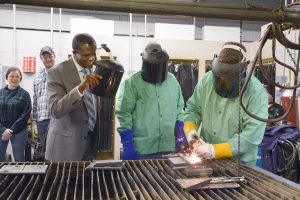 Photo by Robin Hart
On his first official day as president of BCTC, Dr. Akakpo watches welding students work on a project.

He said the community partnerships are already in place and now “it’s just a matter of strengthening that partnership,” which he plans to do by “reaching out to people on a regular basis, and just say, ‘Hi.’” That helps keep the connections going, Akakpo said.

He said communication between local employers, industries and public officials needs to be constant with BCTC. Programs within the community college will be driven by the need of area employers, Akakpo said.

“We have all the best equipment and technology throughout the (BCTC) system. My philosophy is, ‘What are your needs?’ Then we can build the program,” for students to earn degrees and become the well-trained employees that are needed today.

Having recent experience as vice president for business, administrative and student services at North Central State College in Ohio, Akakpo gave an example of an employer who had the problem of not being able to hire enough qualified supervisors. Akakpo suggested the employer send a few people already employed on the lines at the company through an apprenticeship offered at NCSC to get them ready for leadership roles.

“They (employers) have a problem, but they don’t know how to solve the problem. But we are here to provide that solution. It takes someone just to engage with them and letting them know how the problem can be solved, and that is our job,” Akakpo said.

Keeping local workers in the area is also important to Akakpo. He said some high school students are “place-bound” — they don’t want to leave the area where they live.

One program he worked on in Ohio is one that he’d like to see implemented here in central Kentucky, he said: Juniors and seniors in high school should have the opportunity to earn an engineering associate degree at BCTC while still attending high school. That way they would be earning well above the minimum wage, right out of high school, Akakpo said. “So they will stay here and contribute to the community.”

Not all students are just out of high school, Akakpo said. Some at BCTC are studying for a new career after losing a job; or they want a degree in order to earn better wages.

“We are the college of the community,” he said.

One killed in Waynesburg wreck