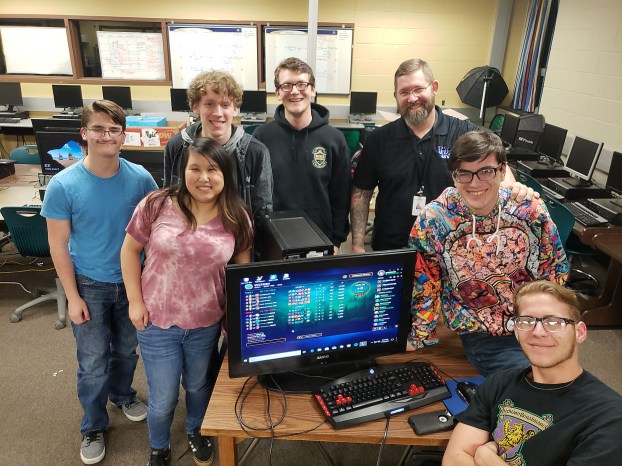 The possibility of college scholarships are already being discussed with members of the first Boyle County High School eSports team, which is also the first-ever Kentucky eSports champions. 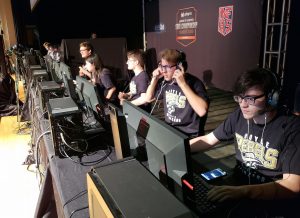 Photo submitted
Members of BCHS Gold eSports team prepare for a battle in the game League of Legends during the championship match on Jan. 28. The KHSAA sanctioned eSports for the first time this past October. From left are Camren Elkins, Kat Lark, Devon Britton, Bryan Stocker and Trey Gordon

Within a week after winning the state eSports championship on Jan. 28, BCHS eSports coach Damian Laymon said, “I’ve been contacted from folks from three different universities wanting to talk to our kids about coming to school there and getting scholarships. … They are probably not going to get a full ride to play video games, but there are scholarships available.”

Laymon said having a video gaming team at the high school “helps to draw in another student group that maybe is kind of being left out of other things.”

“As we’re starting up this new type of activity, it’s great to see the community taking interest. Many of the kids on the team otherwise don’t get excited about school and school events, so this is proving to be a way of encouraging some kids to come out of their shells and get involved.”

Since winning the first state championship in what was called Season Zero for Kentucky eSports, Laymon said even more students are interested in joining the team when the second season begins later this month.

Many of the eSports team members also participate in other school activities, including track, soccer, swimming, bowling and marching band, Laymon said.

During Season Zero, the BCHS eSports team had 16 members, divided into five-person teams that played the video game League of Legends. Boyle had two teams — Gold and Black — that qualified to play in the state tournament, Laymon explained. The Black Team got to the round of eight, but was defeated by Wolfe County, which was undefeated at the time.

It was the Gold Team that ended up beating St. Henry District High School in two out of three games to claim the first-ever KHSAA eSports championship at Collins High School in Shelby County.

As an audience member watching the the championship battles on a huge screen, team member Landon Simmons said, “It was really exciting.”

“There was a lot of cheering in the crowd,” Laymon said. “Most of the audience was made up of other teams. Everybody there knew exactly what was going on.” 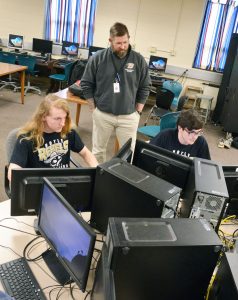 And just like other sports teams during halftime, strategy adjustments were made between games, Laymon said.

“We wanted to make our mark and gain respect in this area, just like other athletes and strong academic students,” Gordon said.

Currently the team is organizing a boosters club to purchase state championship rings and team jerseys.

Laymon is a computer science teacher and track coach at BCHS and grew up playing Tecmo Bowl, Pac-Man and Legend of Zelda.

“I’m kind of the resident geek of the teaching staff,” he said. “… I was the perfect choice to kind of head (eSports) up, but I’ve had to learn the game just to kind of know what’s going on.

“… I’ve never really tried to coach them in teaching them how to play, because they know how to play (League of Legends) 10 times better than I do. I just try to encourage them to communicate and work on strategy.”

Photo by Robin Hart League of Legends character Sylas The Unshackled, is one of 143 characters offered in the online game.

Photo by Robin Hart Boyle County Higih School sophomore Trey Gordon studies a new character in the League of Legends video game at the school’s comuter lab. Gordon ws on the 5-member team that was the first-ever KHSAA sanctioned eSports state championship in late January.
You Might Like

Kentucky legislators heard from numerous judges and prosecutors Wednesday, who warned them to be careful about enacting new reforms to... read more