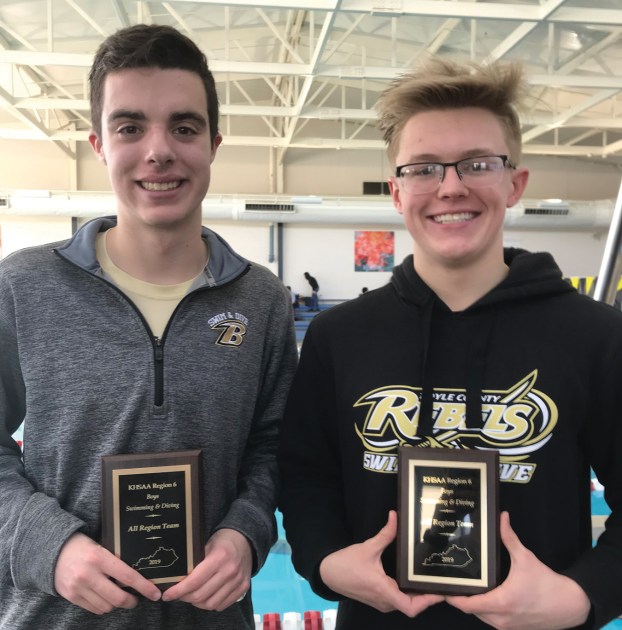 Photo submitted Boyle County’s Jack Stomberger and Campbell Coyle each made All-Region for their performances over the weekend.

The Rebels tied for second on the boys side with Woodford County, with North Oldham placing first by just eight points. Boyle girls were comfortably in second place ahead of Woodford and behind North Oldham.

“The meet was very close,” Boyle head coach Crystal Ellis said. “We knew it was going to be a fight to win the boys title this year.  They swam really well on Friday to set us up Saturday.  The fact that it came down to eight points between three teams is crazy!

“Everyone swam fast. We had several great swims and a lot of close races.”

The Rebels will send 12 different events to state:

“Campbell (Coyle) was swimming against the guy that won the 50 and was second in the 100 free at state last year,” Ellis said. “He’s a senior, Campbell’s a sophomore, so we have a lot to look forward to in the next couple years.  Jack (Stomberger) had a great race in the 200 free as well.  He and Creed (Farthing) finished first and second in that event. Jack’s really close to the school record too.”

The state meet will be next weekend at the University of Louisville from Feb. 21 to Feb. 23.

It was a historic region wrestling tournament this weekend for Boyle County. The Rebels placed  fourth as a team in... read more