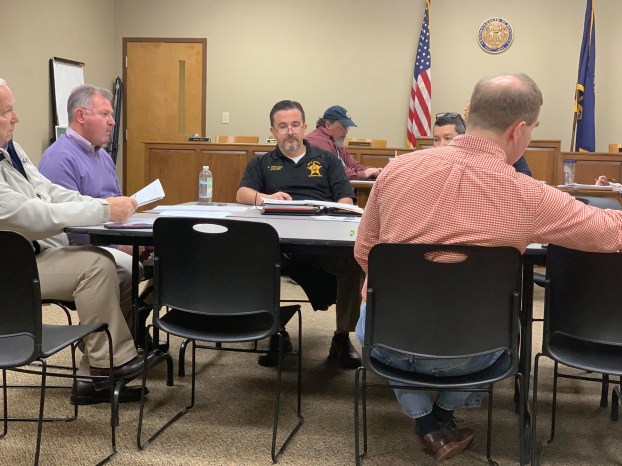 Jailer Brian Wofford has changed up the bond policy at the Boyle County Detention Center due to being short-staffed, but Mercer’s county attorney doesn’t think he has the right to do so.

Friday, Mercer County Attorney Ted Dean brought up the issue at the end of the Boyle-Mercer County Joint Jail committee meeting held in Harrodsburg. Information was sent to Dean outlining that the jail would no longer take bond payments in-house from Monday through Friday, but would still take them on the weekends and over holidays when the Boyle courthouse is closed.

Wofford said there have “been some problems” at the jail, where staff have made some mistakes in accepting bonds, which he’s been working to fix. He said, “It’s very stressful; there’s so much going on. I need to make it easier for my staff. It’s a big burden, takes a lot of time to write it out, count the money twice.”

He said there’s generally six deputies on duty each schedule, but vacations and medical leaves have to be accounted for. “So if someone’s also on a hospital run, we’ll be down even more people,” Wofford said.

Dean said Mercer and Boyle have been “dealing for the last two years with jail overcrowding,” and said now people who get arrested will have to “spend all of that day in jail, up through 8 the next morning.”

But the policy only affects those who arrested and booked after the courthouse closed, essentially meaning anytime after 4:30 p.m., up until it opens at 8 a.m. the next morning.

Dean thinks the new policy will only add more bodies to the jail, which has been “dealing for the last two years with jail overcrowding.”

“One, I think It’s a terrible idea, just point blank,” Dean said. “If you’d talked to me about it beforehand, we could’ve had this discussion privately. Two, I don’t know that this is a unilateral decision you get to make. This is a Joint Jail issue … it’s a policy issue. Something in my opinion that the Joint Jail Committee should’ve vetted out, then we could’ve rolled with it.”

Woffered responded, “As being elected jailer, I have some leeway on what I can choose to do and not to do.” He said some jails don’t take bonds at all, and the jail “is not required by KRS to take it. I don’t want to cut it all the way out, but it has to balance with what my staff has to do.”

Dean said he understood Wofford’s frustration on dealing with bonds. “I just don’t think this is a good idea. I’d be willing to try to come up with a better solution for you, if there are other people who can take bonds … seems like we should be making it easier for people who can post it to get out of the facility and not make it harder.”

Dean said he “won’t quibble” with Wofford on whether he can or can’t make the policy change, “but I would encourage you to look at the interlocal agreement,” and added it’s a different situation “entirely than every other jailer’s situation” due to that agreement.

Wofford said his only other option would be to approach fiscal court and ask that the jail not accept them at all, however he didn’t want to create burdens elsewhere — which is why the jail will still accept bonds over the weekend and on holidays.

“And this is not set in stone; we can look at it again,” Wofford said. But he said he felt the move was critically important at this time due to staffing.

Wofford said they may try to find a bailiff or other court security person who’s sworn in through the court system who can work after hours.

Monday, Wofford said those who haven’t been behind the scenes in the detention center may not realize why the bond payments are an issue. “Deputies can be accepting anything from $1,000 up to $5,000,” he said, which has to be counted twice, all in addition to several other duties, such as checking each cell every 20 minutes, or every 10 minutes if an inmate is on watch. “If they come up short, the deputy who is counting it is responsible for it. There’s paperwork to do; it takes time.”

He said as far as Dean saying he didn’t have the authority to make the change, Wofford said the interlocal jail agreement between Boyle and Mercer “does not supercede KRS or the Constitution. I’m a duly elected official.”

Wofford said, “According to KRS, it’s the fiscal court that gives me approval, not Ted (Dean). If (Boyle County Attorney) Chris Herron was OK with it, I’m not sure why he wouldn’t be.”

Neither Herron nor Dean were able to be reached by deadline Monday.

The Kentucky statutes Wofford provided all refer to approval by the fiscal court “of the county in which the prisoner is incarcerated.” He said none of the statutes refer to any other governing body, such as a joint jail committee.

“I appreciate having the committee, and I think it’s done a lot of good,” Wofford said. However, he says “the underlying authority is Boyle Fiscal Court.”

“I’m trying to make things a bit easier on my employees. This is an incredibly difficult job, and people just don’t realize what they deal with day in and day out,” Wofford said. “Safety and security is always the No. 1 goal. I have to take care of my people.”

Danville could acquire Boyle’s half of Millennium Park

In an unexpected move, Danville is negotiating with Boyle County for outright control of Millennium Park and the Parks and... read more