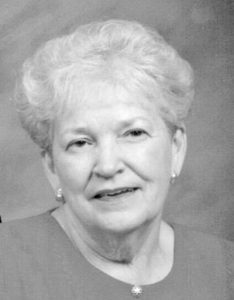 Sue Fletcher Martin, 79, of Stanford, Ky., passed away on Saturday, February 9, 2019 at Fort Logan Hospital. She was the wife of the late Russell Terry Martin, her husband of 43 years. She was born on September 24, 1939, in New Salem, Ky., to the late John “J.C.” Fletcher and Carrie Baugh Fletcher. Sue was a retired school teacher where she taught at LaGrange Elementary in Oldham County, Ky. She was a devoted member of McKinney Baptist Church where she was very involved in a Wednesday night program called “Cross Care”, a children’s program. She was also involved in the McKinney Homemakers and the Bunco Club.

In addition to her husband and parents, she was preceded in death by one sister, Amy Maxey.

In lieu of flowers, donations may be made to the McKinney Baptist Church.