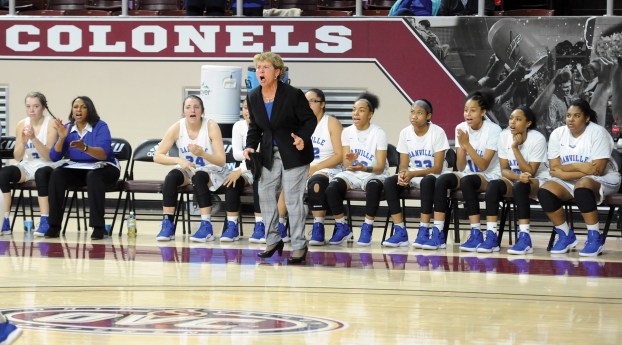 Judie Mason’s return to the Danville girls basketball program has gone about as smoothly as she had hoped.

And that’s down to her players.

“I’ve said from the beginning, this team has done everything I’ve asked them to do since day one,” Mason said. “And I’m not easy, I know I’m hard. I had to put the full-court press on them because I knew they could be special this year. I came back to coach because I love these kids in the hallway. It panned out exactly like I thought because they’re good kids. It has made my job easier. All I’ve done is show them some love, give them a little discipline and they’ve really taken it over. It has been a fun year to come back.”

Mason was named 12th Region girls basketball coach of the year, along with Lincoln County’s Cassandra McWhorter, for helping the Admirals to a 22-5 record this season and a share of the 45th District regular-season title. It’s Danville’s winningest season since 2013-14 when Mason took the Admirals to the state tournament.

For Mason, having a group of seniors — led by star Ivy Turner — who have bought in has made it infinitely easier in her return to the sidelines.

“Ivy had me as an eighth grader, then a different coach freshman, sophomore and then junior year,” Mason said. “Senior year, it’s supposed to be all about her, continuity, and to have a new coach and totally different coach, that’s why I think she’ll be an even better college player. Just like Amber (Wheat), Sam (Swann), Nautica (McPherson), they’ve been playing since sixth and seventh grade. I had them in middle school, I coached my middle school back then. So they’ve been around me, I think that made it flow better because they know how I operate.”

And the rest of the team has fallen in line, helping Mason make her mark. The Admirals are more up-tempo this season than any other team in the region: Danville’s averaging more than 70 points per game, top five in the state.

“That’s the biggest thing with this group, they have bought in,” Mason said. “And I’m not easy. What people don’t see is what we do off of the court, we have so much fun. I can be chewing them out one minute, and the next I’ve turned around and I’m laughing at them. They know that. That’s what makes them fun.”

Mason’s biggest challenge this year was implementing that style across one year instead of building it across multiple seasons.

“Trying to get in a system in one year. Everywhere I’ve been, my third year was my best year,” she said. “Trying to put in my entire system from July to November was hard. In July, all I tried to do was fundamentals, fundamentals, fundamentals. I couldn’t get in my system, so we didn’t really have it in till after Christmas. That’s the hardest part. But the beauty of it is, I have intelligent girls that made it easier to teach them basketball because they’re smart in the classroom.”

Mason has been helped by a group of players who bought in off of the court as well as on.

“We’re young, I start three sophomores, sometimes four. The seniors have never one time had any jealousy, run their mouth, girl drama,” Mason said. “And you don’t find that ever. This is my 31st year and it’s my first year, knock on wood, that I’ve not had girl drama. That’s what has made it fun more than anything. That’s why I’m so proud of this senior class.”

The Admirals will be the 2-seed in the upcoming 45th District tournament, where the Admirals hope to return to the region tournament and make noise. Mason and her team will enjoy every moment.

Things have gone right for Danville boys basketball this year. The Admirals have put together the best year in... read more