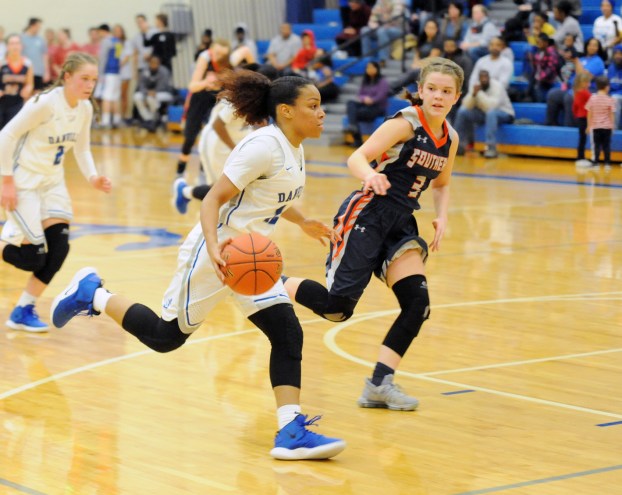 She’s not one of the 17 finalists for Kentucky’s Miss Basketball, but Danville senior Ivy Turner certainly has a strong supporter in Danville coach Judie Mason.

“In my opinion, Ivy Turner is the best player in the state of Kentucky,” said Mason.

Mason plans to vote for King, who had 25 points in her double-double in a 88-85 loss to Danville last week when Turner poured in 44 points for Danville.

“I absolutely hope that Emma wins. She is a class act on and off the floor. In our game both her and Ivy really competed, but they also helped each other up off the floor because they respect each other,” Mason said. “Emma played well in the LIT and in the tournament at Scott County. Her name is out there. They have played in some good tournaments. I wish we could have done that.”

Mason coached Turner as an eighth-grader but took three years off from coaching before taking over again this year. She knew it would take a “full-court press” to get the kind of statewide recognition for Turner that King, a UK signee, already had because of her play and her team’s success in previous seasons.

“Ivy has done everything she could to get her name out there this year,” Mason said.

She became Danville’s leading scorer with 2,313 points in the win over Lincoln and then added 24 more points the next afternoon in a win over Oldham County when she made 14 free throws.

She is averaging 24.3 points and 8.5 rebounds per game, both team highs. She’s hitting 51 percent from the field and 74 percent at the foul line — where she is averaging close to 10 free throws per game. Her only weakness has been 3-point shooting — she’s hitting only 22 percent and has just eight 3-pointers this year.

Division I coaches are starting to pay attention. Presbyterian College has made an offer. Northern Kentucky has been to watch her play.

“Ivy was not really promoted her freshman, sophomore and junior seasons and her team did not advance in regional play,” Mason said. “But if you have ever seen her play, you know how good she is. She makes my job easy.

“Nobody was really looking at her and when coaches do for the first time they say, ‘Wow.’ That’s why she should be considered one of the state’s best players if not the best,” Mason said. “Most Division I programs have players picked by their sophomore year. Ivy didn’t get that chance.

“She has put on a show this year. She has scored over 600 points. She has turned into a true point guard and has other girls who can make shots and run with her. She will get better every single year and she loves to pass the ball. She will be a great college player.”

Mason knows the Miss Basketball voting process is part “political” and she also wishes more of the state’s coaches actually voted for the winner even if Turner is not eligible for selection.

“The process is what it is,” Mason said. “I wish we could have done more for Ivy, but guess what? She’s fine. Nothing bothers her. She could care less. That’s part of what makes her so special. She is our all-time leading scorer and was kind of embarrassed by me even honoring her. I have never seen Ivy mad. I get mad for her, but she never gets mad. She just plays and wants to win.”

“Ivy is one of most humble and unselfish kids you would ever meet. That’s why it’s great to see her break the scoring record at Danville. Nobody has thought less about breaking scoring records than Ivy Turner,” McKinney said.

Danville will have more wins than any 12th Region team going into postseason play. However, Mason says Lincoln remains the team to beat in a region again filled with some teams and terrific players. Mercer County won the state title in 2017 and 2018 and Seygan Robins of Mercer was 2018 Miss Basketball.

“For years 12th Region coaches like Ken Hurt, Randy Salyers, Chris Souder just went to work and competed against each other. The region got better,” Mason said. “Rockcastle won state. Casey had a nice run. Lincoln had a run. Wayne County did. This region has good basketball and does again this year but to me, Ivy is still the best of the best. Am I biased? Sure. But her numbers say a lot, too.”

Judie Mason’s return to the Danville girls basketball program has gone about as smoothly as she had hoped. And that’s... read more