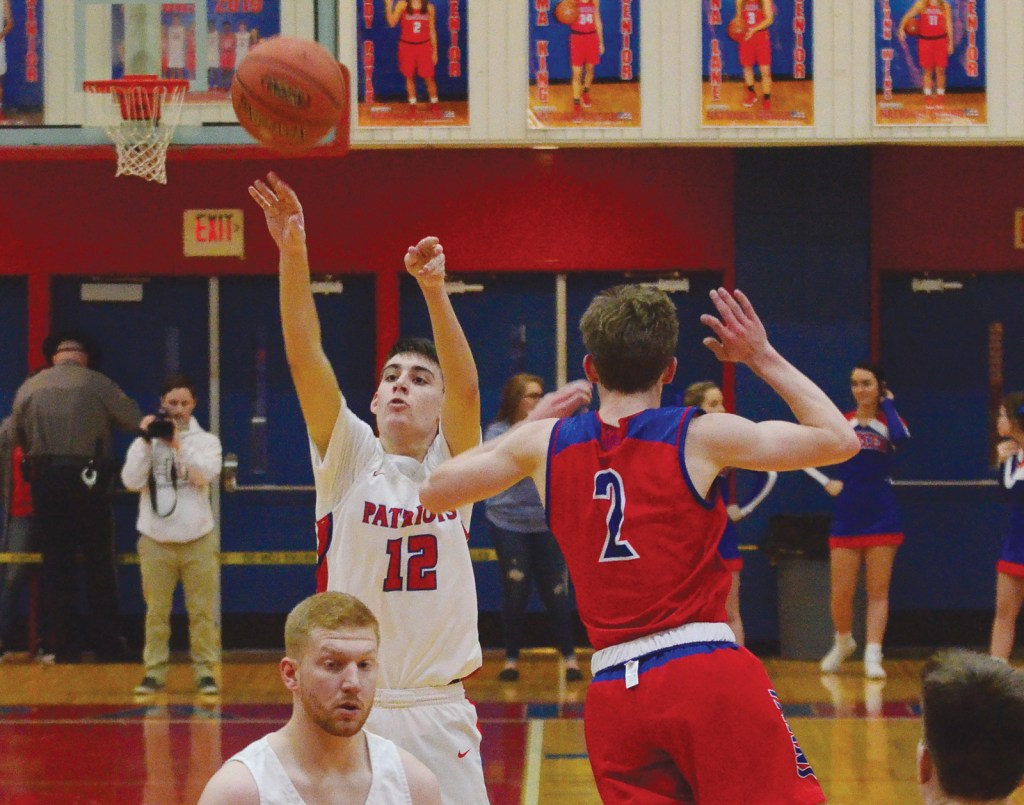 STANFORD — Baylor Mattingly made the most of his first varsity start by scoring a team-high 18 points to help lead Lincoln County to a 56-46 win over Mercer County in the 12th Region Tournament quarterfinal round Tuesday night at LCHS.

The sophomore guard scored all of his points from 3-point range, connecting on 6 of 10 shots from behind the arc. He scored five of those treys in the second half to help the Patriots extend a one-point halftime lead to 15 points as they advanced to the semifinal round.

Mattingly started at shooting guard, replacing point guard Jaxon Smith in the starting lineup, with Smith out with the flu.

Senior Blake Smith moved over to point from his normal shooting guard position. Smith also hit double figures in the win, scoring 14 points on 4-for-9 shooting. He was 5-for-7 at the foul line.

Lincoln (21-12) played from behind the entire first half, until just 4.3 seconds showed on the clock. Bryson Yaden had just drained a 3-pointer to get the Patriots within 18-17 then Smith stepped to the foul line and sank two free throws to give the Patriots a 19-18 lead at the break.

Lincoln never trailed in the second half. The Patriots opened the third quarter on a 7-0 run to take a 26-18 lead. Smith opened the run with a 3-pointer and Riley Bodner and Elijah Frye had a bucket apiece in the paint to make it an eight-point ballgame.

The Patriots posted their first double-digit lead, 34-24, after two Mattingly 3-pointers late in the third period. Mercer (18-12) would cut into the deficit before the horn sounded on the third, though, with Nathan Tatum draining back-to-back 3’s to make it 34-30 heading into the fourth quarter.

Smith scored the first four points of the fourth quarter, all off Mercer turnovers, to push the Lincoln lead back to 38-30.

Mattingly nailed three of his 3’s midway through the fourth to help Lincoln cushion its lead to 54-39 off a 16-8 scoring run. Bodner had three points in the run and Smith and Frye each had two.

Kaelin Drakeford, who led Mercer with 18 points on 5-for-13 shooting, tallied 13 of those points in the second half as he tried to get the Titans back in the game. Carter Baughman also scored in double figures for Mercer, finishing with 14 points on 4-for-12 shooting, including three 3-pointers.

Lincoln will play Wayne County in Friday’s semifinals. The Cardinals advanced with a 59-52 win over Somerset.

Admirals bounce back, earn win over West Jessamine in…