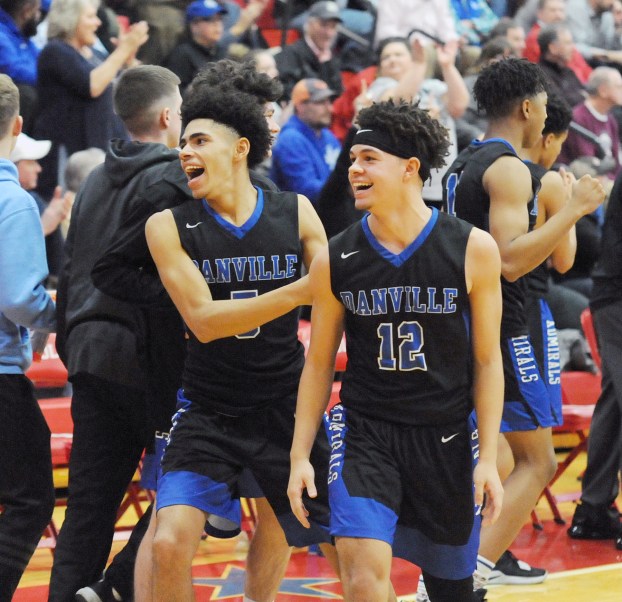 Danville brought excitement to the court this season.

The Admirals season ended with 29 wins, and it was on the defensive end of the floor that made Danville stand out.

Ed McKinney’s squad ranks 19th in the state in scoring defense, allowing just 52.3 points per game. That mark is tops in the 12th Region among teams that made the region tournament.

McKinney said that the team’s focus on defense stemmed from a group of seniors willing to give whatever it took for the team as a whole to be successful.

“In today’s world of basketball, I don’t think the individual has ever been more celebrated,” McKinney said. “Whether it’s NBA or college, it’s about Zion (Williamson) or LeBron (James). When the kids see this and that, the promotion of the game, it’s difficult to play team basketball. All of us coaches are fighting that.

“The thing I’ll remember about this team: They were a team. They really weren’t out there trying to get individual credit. This group of seniors was very, very unselfish with their playing time, their shots.”

Most of those seniors — Caden Hill, Tevin Kavanaugh, Brennen McGuire, DeShaud St. Martin and Zach Thornton — have been with the team multiple years and haven’t seen a winning record during their four years in high school until this year.

“This is a high-character bunch of kids,” McKinney said. “… After the fog of this clears, you look back, it was a pretty good year for Danville basketball.”

Danville’s unselfishness is what kept them at the top of the 12th Region for the entirety of the regular season: The Admirals had six different players lead them in scoring this year. At least seven players scored in a game 29 different times this season, and the Admirals went 26-3 in those games.

McKinney said he and his coaching staff rarely criticized shot selection during games, and that’s what helped his players play loose.

“You don’t want guys thinking about it,” he said. “We tell them all the time, if you think it’s a good shot, you’ve got to shoot it with conviction and turn it loose. We’ll decide if it’s a good one after the fact.”

Sophomore Dante Hayden led the team in scoring 15 different times this season and finished with a 12.4 points per game average.

Thornton and St. Martin were next, averaging 11.8 and 10.7 points per game, respectively. The pair led Danville in scoring in nine different games this year.

Down the stretch, the team leaned on Thornton and St. Martin more and more: The two seniors led Danville in scoring in 10 of the team’s final 14 games.

McKinney said his seniors’ sacrifice was the catalyst to the team’s most successful season since 2002 and one of the winningest seasons in school history.

It started with Kavanaugh, the team’s point guard. Before Kavanaugh’s knee injury, the Admirals were 13-1.

Kavanaugh would return in a limited role — and large knee brace — starting in the All-A tournament in late January.

“Him getting injured hurt our team badly,” McKinney said. “He was our point guard. I really respect the guys who came and filled in, Zach did it some, Trey Dawson did some. It starts with Tevin.”

St. Martin and Thornton were able to consistently lead the team in scoring but were fine to defer to Hayden, Dawson or anyone else, McKinney said. Hill, who had some of the best shooting stats on the team (44 percent from the field, 33 percent from beyond the arc and 79 percent from the line) finished as the team’s sixth leading scorer. He stepped into the lock-down defender role after Kavanaugh went down.

“Brennen was very unselfish, he’s a heck of an athlete and I know he wanted to play more,” McKinney said. “For him to keep showing up, playing hard, I respect the heck out of that because he was probably the most athletic kid we had. For him to be willing to do that, not be a distraction, was awesome.”

Danville’s seniors were emblematic of the way the Admirals can be successful in the future: A dedication to defense and an unselfishness on the offensive end of the floor.

“They are just a great group of kids who are destined for success because they do things the right way,” McKinney said. “That carries over from basketball.”

Patriots battle but fall short in first round of state tournament