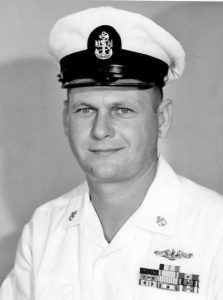 William F. Catron, 86, formerly of Danville, Kentucky. Husband of 64 years Shirley A. McGee Catron. Born in Hidalgo, Kentucky to Odis and Elizabeth Vickery Catron. William served his country in the United States Navy for 23 years. He was on many submarines, special forces, and River Patrol during his two tours of Vietnam. He was a also a Navy recruiter in the early 1970’s in Somerset, Kentucky. After retiring from the Navy he attended Somerset Community College, and graduated from Western Kentucky university with his Bachelor’s Degree in Agriculture and his Master’s degree in Education. He taught math and science at Blessed Mother School and St. Alphonsus School in Owensboro, Kentucky. He also taught the GED at North Point Training Center in Burgin, Kentucky, where he was awarded Teacher of the Year in 1994; something he was very proud of. William enjoyed gardening, flowers, and bird watching. He also enjoyed watching UK basketball games in the evenings with his wife. He enjoyed visits with his grandkids always asking about school, and about what their plans for the future were. He was an active member of the St. Peter & Paul Catholic Church in Danville, and St. Andrew in Harrodsburg. He was also involved with St. Mildred Catholic Church in Somerset.

A service of Catholic mass will be held at 11:30 a.m. Monday, March 18, 2019 at St. Mildred Catholic Church with Father Jay Von Handorf officiating. Burial will follow in Mill Springs National Cemetery. Visitation will be from 2 p.m. to 5 p.m. Sunday, March 17, 2019 at Morris & Hislope Funeral Home.

Morris & Hislope Funeral Home is in charge of arrangements.