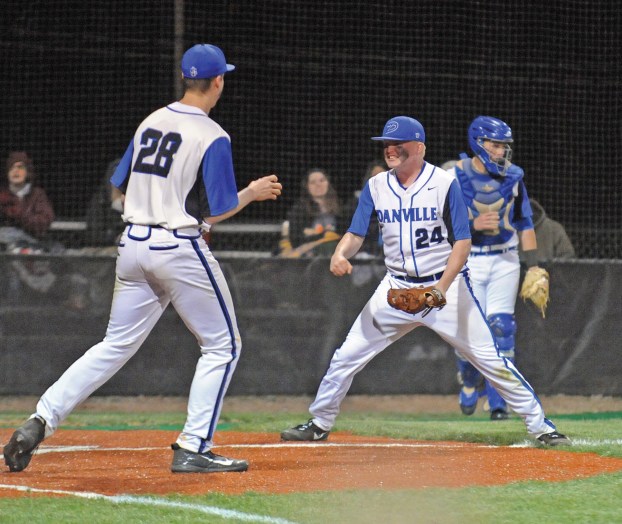 Hunter Baxter and Christian Howe are happy to be back healthy.

The pair of Admirals missed portions of  the 2018 baseball season due to injury, but both made their presence felt in Monday’s season-opener against Madison Southern.

Danville beat Madison Southern 4-2, coming back from a 2-0 deficit in the fifth inning.

Baxter entered in the fifth inning for starter Ethan Wood in a precarious situation: Wood had just hit a batter and then walked the next. Without an out, Baxter entered and shut down the visitors.

He’d go the rest of the way to earn the win, pitching three innings. He allowed a hit and a walk and struck out five batters.

“I can’t say enough about Hunter Baxter,” Danville head coach Paul Morse said. “He battled some injuries, got hurt right off the bat last year. We think he can help us in a lot of different ways, too. He was the starting catcher two years ago. That gives us depth there and he can give us innings on the mound like he did tonight.”

“Early on, pitching is always ahead of hitting so that will catch up,” Morse said. “I was really pleased with Ethan, he’s coming out of basketball and hasn’t had a whole lot of work. He’s only thrown two or three bullpens and threw in the scrimmage at Lexington Catholic last week. I thought he pitched well today.”

Madison Southern opened the scoring with a two-run home run by Tristin Ingram in the top of the fourth inning.

Danville responded with a run thanks to a double from Brady Morse, scoring pinch-runner Noah Goodman.

But the win wouldn’t have happened without Howe.

Howe missed the second half of last season due to an elbow injury, but he announced his comeback Monday with emphasis.

The sophomore hit a three-run home run in the fifth inning to give Danville a 4-2 lead.

“He’s a special player,” Morse said. “He can play lots of different places on the field defensively, he can definitely swing it. He’s a bigger and stronger version of what he was last year, he’s 6-foot-3 now.

“He can hit it. We’re going to need him to have a good year for us, he’s been working hard to get back and it feels good to see him in this first game being successful.”

Howe’s hit was all Baxter would need, as he’d dance around a pair of baserunners in the final frame to get the win.

“With (Hunter) and Christian, they didn’t play a whole lot last year but have stepped in to take those two seniors’ spots from last year that we lost. That really helps us,” Morse said.