Prominent Danville druggist keeps ahead of the time

John S. Wells, a local druggist in the early 1900s, advertised regularly in The Advocate-Messenger about one of his products used for nervous disability and headaches, and other products in his drug store on Main Street.

“Enterprise is one of the virtues of our leading druggist, John S. Wells.

Often he has so demonstrated to the people of Danville his ability not only to keep peace with but to keep ahead of the time,” according to an article in February 1917.

“The people of our city have many times had occasion to be proud of the way this prominent druggist has shown himself to be among the foremost in the country in adopting for his standard remedies the latest scientific discoveries.”

The article stated that several years ago, Wells began thinking seriously about the use of cod liver oil. He had sold quantities of this valuable medicine but people didn’t like this remedy and wanted him to try something different and not nauseating. 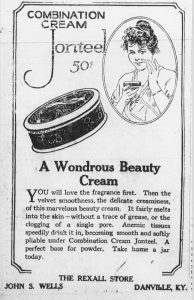 The Advocate-Messenger archives
An advertisement for Jontell beauty cream was in The Kentucky Advocate in July 1920.

“Wells learned of the important discovery made by two French chemists, whose secret had been bought by a large company in Boston. He made arrangements to handle this new discovery which has taken the place of old-fashioned cod liver oil and emulsions.”

The formula had all the curative principles as cod liver oil, but it was free from any odor, taste or any of the other unpleasant features.

It was not a patent medicine, and was known as Vinol.

It was touted as having the same tissue-building, medicinal and curative elements of cod liver oil. It was used to build up strength for people in run-down conditions after sickness, for feeble old people, delicate children and a remedy for chronic cough, colds and bronchitis.

John Sr. and his wife, Margaret, left Danville in 1921 for Clearwater, Florida, where he operated another drug store 20 years.

Both are buried in Bellevue Cemetery.

While in Danville he and his family lived on Broadway and Lexington Avenue.

He was president of the Danville Kiwanis Club, a Mason, and member of the Presbyterian Church.

His wife, Margaret Owsley, was a member of the Daughters of the American Revolution.

John Jr. was a 1925 graduate of Centre College and Rush Medical School in Chicago, and he practiced medicine in Chicago, New Mexico and Iowa.

He is buried in Bellevue Cemetery.

From our files, March 16

100 YEARS AGO — 1919 One of the boldest acts in the forgery business in this community in recent years... read more