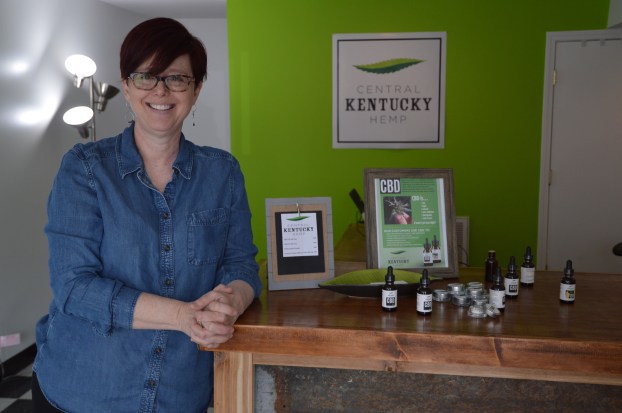 Mary Noelker opened the doors to Central Kentucky Hemp two weeks ago. Aside from tinctures made combining CBD and essential oils, she also sells an isolate powder. Photo by Bobbie Curd.

CDB — it’s not pot, it’s legal and it won’t get you high. And many are swearing by it as a natural remedy for numerous ailments and conditions.

Mary Noelker is one of those. She’s had anxiety since she was a little girl, taking a pharmaceutical drug for years to battle it. When she heard about CBD and all its positives, she ordered some from Colorado, where it was legal, and was amazed by the results. 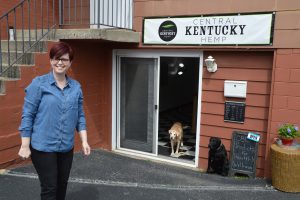 Noelker’s business is tucked below her husband’s law office at 116 N. First St. She loves spending time with her customers, figuring out which CBD product will benefit them the most. Photo by Bobbie Curd.

Now, she owns Central Kentucky Hemp, located below her husband’s law firm on North First Street, in order to offer the same help to others.

CBD stands for cannabidiol, just one of 104 of the cannabis plant’s chemical compounds, known as cannabinoids. The use of cannabis to treat pain could go as far back as 2900 B.C.

CBD may come from the same marijuana plant that tetrahydrocannabinol (THC) is derived from, but it is not psychoactive — it has no mind-altering effects and doesn’t produce the sensation of getting high. It’s extracted from the plant and usually mixed with a carrier oil, like coconut or olive, and used to treat things like chronic pain and anxiety. It has also been used to treat depression, inflammation and arthritis; to relieve cancer-related symptoms; even to reduce acne.

Research shows CBD may also have neuroprotective properties, due to the way it interacts with the body’s endocannabinoid system, by binding to the receptors in the brain’s signaling systems. Last year, the FDA approved a CBD-based medicine to treat two rare forms of epilepsy.

Noelker says her husband, Bill, also uses it. “He’s a former fighter pilot and has lower back pain due to pulling G’s in the cockpit for all those years,” she says, referring to the compression of his spine from the g-force. “It’s helped him tremendously.”

But the biggest success story in her family is probably her niece, Rosemary Cook. She suffered from traditional and abdominal migraines — a neurological condition which kept her out of school regularly, and out of a lot of things. Many don’t realize migraines can be abdominal; Cook says imagine having a constricting zip tie right under your chest, and feeling so much pain you can’t breath and want to vomit. She tried several pharmaceutical drugs, but relief never lasted very long.

“I was terrified to go to school, to have an attack,” Cook says. She was afraid to drive, afraid of being too far from an emergency room or from her mom, Liz Cook, Noelker’s sister. 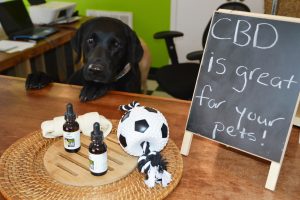 Sage, one of the Noelker’s family dogs, pops up on the counter. She and Jessie are daily fixtures at Central Kentucky Hemp with Mary Noelker, and Jessie even takes CBD to help with her elderly joints. Photo by Bobbie Curd.

“I had to take it for about a week or two before I noticed a difference,” Cook says. Now 18, she’s about to graduate high school, has a job and finally feels like herself again.

“For me? I think it’s a miracle, literally,” she says.

Noelker wanted to set up shop not only because of what CBD did for her and her family, but partly because of the relationship she’s built with HDR Farms in Harrodsburg, where she buys her product. She says because there so far is no regulation for CBD sellers, it’s been popping up all over, but buyers should beware.

“If someone is going to buy CBD, ask for the third-party testing results,” Noelker says, and pulls out a sheet to explain. Because CBD was just made legal nationwide, due to the Farm Bill passed last year, there are no regulations in Kentucky on selling it yet.

“You don’t have to have a license or prove what you have is pure and authentic,” she says. When licensed hemp farms process a batch of CBD, it must be tested by a third-party lab.

“So, as far as regulations, it’s kind of like the wild, wild west right now, in terms of selling CBD,” Noelker says, with products being sold anywhere from head shops to gas stations.

But she has no hesitation with what she sells. “I’ve been out to the fields when the hemp is growing, seen it in the lab when they process the plants and I know the people. I want to keep this local.”

Noelker sells tinctures in different strengths that she’s mixed herself, which can be used orally, under the tongue or mixed in drinks. Some she knows use the oil on their skin for psoriasis, and she’s started to dabble in making different salves and balms, using bases like mango butter, beeswax or shea butter, even developing different mixtures for certain customers’ conditions.

To prepare for her new business, Noelker researched for quite some time, and also has a friend who is in the cannabis industry in California. “Her husband is the chemist for their farm, and they’ve helped me tremendously, as well as someone with HDR Farms,” she says.

Although she knew quite a bit about the oil due to treating herself, she says learning about all of its properties, how it helps and why, and what’s important to know about dosing has been fascinating.

Aside from asking a seller to prove their product’s purity, Noelker also emphasizes she’s not a doctor, and anyone on any other medications should always check with theirs.

“It’s truly safe to use, and non-addictive, but just to make sure there’s no possible interactions with other medicines. Sometimes another dosage of a medicine you’re on may need to be changed because CBD is metabolizing the same way that medicine is.” 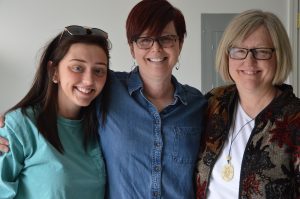 Because everyone is different, dosages sometimes must be played with. She’s found herself being a consultant of sorts with her customers, even after only being open for two weeks now.

“I’ve heard so many interesting stories about conditions and other personal things from my customers, I’ve actually learned a lot doing this, myself.”

The Noelker’s dog, Jessie, also takes CBD. As a 10-year-old lab, arthritis began to set in on her joints. So Noelker offers a special pet line, named after Jessie, which can be used to soak dog treats in or put in their food — it not only helps with inflammation, but anxiety, too.

As far as CBD showing up in drug tests — Noelker says that’s a misnomer; CBD contains no THC, so it can’t show up. However, there are full spectrum products, which have the legal limit of THC (.3 percent) in them, which she will be selling soon.

“It’s got more of the plant compounds in it … I wouldn’t think at the .3 percent, that it would show up on a drug test, but would I recommend someone taking it who is going to be tested? Heavens no,” she says. Some prefer the full spectrum ones because of what’s called the “entourage effect,” where the THC, CBD and other cannabinoids work together.

“Some feel it’s a better health option,” she says. The oils also have a lot of antioxidant benefits, as well.

As far as her long-term goals for the business, Noelker thinks for a moment. Sure, she’d love for the business to “blow up” and be a hit. “But I don’t want to do anything that will prevent me from doing it the right way.”

She doesn’t want to offer an overwhelming inventory of products, or become a CBD “superstore.”

“I don’t want to do that. I want to be the person who’s been to the field and the lab. I’m only selling my products, which are made from using hemp from this one, local farm. That’s my thing, and how I’m trying to distinguish myself from anyone else who’s doing this.”

For anyone who wants to know more about the benefits of CBD, Noelker suggests checking out the Realm of Caring Foundation, a non-profit organization providing cannabinoid research initiatives, programs and services, as well as an extensive research library, at www.theroc.us.

Noelker’s Central Kentucky Hemp products range in price from $35-$60. Veterans and first responders are given a 10-percent discount.

“And I will also be a part of the Boyle County Farmers Market this year,” Noelker says. “I am so thrilled about that.”

Isolate powder is pictured, a product sold by Noelker. Photo by Bobbie Curd.

“If someone is going to buy CBD, ask for the third-party testing results.” pictured are the third part test results from products Noelker sells. Photo by Bobbie Curd.

Noelker sells tinctures in different strengths that she’s mixed herself, which can be used orally, under the tongue or mixed in drinks. Photo by Bobbie Curd.
You Might Like

Some on fiscal court question progress of EDP

During the last Boyle County Fiscal Court meeting, a lengthy conversation developed about the county’s support of the Danville-Boyle County... read more