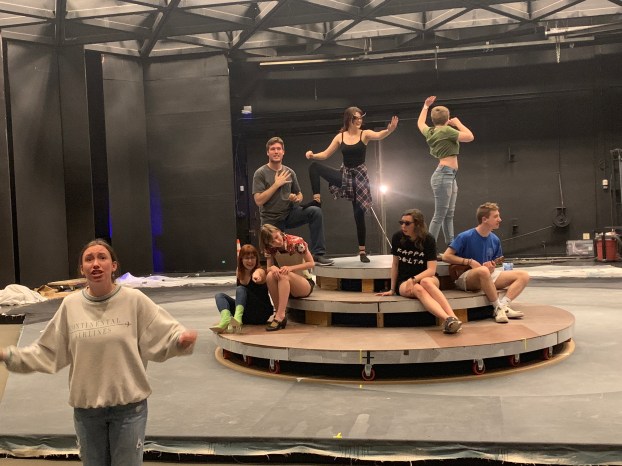 Directed by Patrick Kagen-Moore, “James and the Giant Peach” is a story about a lonely young boy who embarks on an unexpected yet wondrous adventure. Centre College Drama’s interpretation of this play by Roald Dahl is light-hearted, visually stunning and funny, filled with outlandish and memorable characters.

Kagen-Moore, professor of dramatic arts, sat down for an interview about the upcoming production, as well as one of the main actors, Katherine Moeykens, who plays James. Costume designer Anna Loring also talked about her “role” in the production.

AC: Why did you decide to choose James and the Giant Peach as this semester’s production?

PKM: “It was time in our four-year rotation to do a “theatre for young audiences” piece. I like children’s pieces that allow for a lot of theatricality and require us as theatre artists to invent the fantastic. Roald Dahl is a significant author in the lives of our current students, and a worthy artist to bring to a new generation. His work is sweet and hopeful. The play is deceptively simple; it requires us to create many environments that slam up against one another – James’s grim world with his aunts, the magic of the insect world, the marvelous overnight flight across the Atlantic, etc.”

AC: What are some of the play’s strengths? 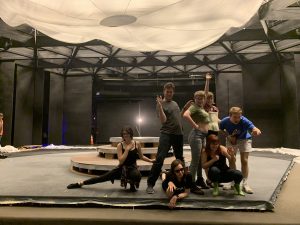 PKM: “James has a lot of interesting work for actors – the aunts, the insects – and a lot of need for an effective ensemble in support of the main characters. It’s challenging to get a full crew of 14 (plus) all on the same page and creating a unified world. And much of that depends upon a kind of physical style of acting. When you get there, though, the play offers a delightful action about a young boy whose natural good heartedness and problem solving powers lift him out of a harsh world into success and belonging.”

AC: What has been the most fun aspect of directing this production?

PKM: “Always, always for me – working with the actors. I love them and I love the work with them.”

AC: What are some of the show’s strengths?

KM: “The shows biggest strengths are definitely the creativity that everyone has shown throughout the production. This show has a lot of unique technical challenges and everyone has really embraced the magic of the show. Also the actors (of course). Everyone shows up and does their best and has created distinct and fun characters that I think will really make the show come alive.”

AC: What has been the most challenging/best part of playing James?

KM: “The most challenging/best part of being James is that, even though he’s the main character, he’s also somewhat the most normal character on stage. At first I found it challenging because I was afraid that James would be lost in the fantastical world he lives in, but I was given some advice that I shouldn’t fight that. James is the lens in which kids see themselves in the story. I shouldn’t worry about making him noticeable, I should just let him be a kid taking part in this story as he would.”

AC: What has been the most fun aspect of working on this production?

KM:  “The most fun aspect so far has been working with my fellow actors and seeing all of their work. It’s amazing to see the characters come alive as people through the actors developing their voices, beginning to embody the character, and seeing peoples costume pieces as they start to arrive in the rehearsal space. The character work is the most fun for me, but costumes come in a close second if I’m being honest. They are SUPER Cool.”

AC: Why did you want to be involved with this production?

AL: “I’m super excited to be a part of this production, I was (and am) a big fan of Roald Dahl’s weird and wonderful worlds, and I was excited by the creative challenge of bringing giant, talking insects to life in costume.”

AC: What are some of the show’s strengths? 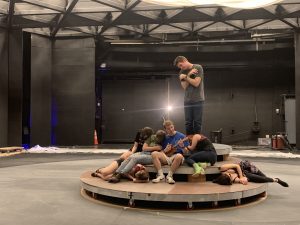 AL:  “It’s a sparkling, magical adventure—and everyone has worked hard to create a visually stunning world in which to play.”

AC: What is your vision for the costumes in James and the Giant Peach?

AL:  “It was, as I said, a creative challenge to transfer non-human characters into a human costume. A visually realistic approach would have never been completely realistic, and the fantasy nature of the show inspired me to design costumes that were insect-inspired without trying to be completely insect. I wanted the characters to be bright, glittering, showy, and distinct, so James could really plunge with the audience into a fantasy universe.”

AC: What has been the most fun aspect of working on this production?

AL: “I really enjoyed the process of conducting research and designing the costumes on paper. But what was really fun was visiting rehearsal for the first time and seeing how the actors had chosen to play the characters. It presented a host of new movement ideas, and color and light ideas. I think it’s going to be fun, too, to see the actors and costumes finally combine!”

ARTS COMMISSION OF DANVILLE/BOYLE COUNTY News release In 2018, the Heritage Business and Professional Women and the Arts Commission sponsored an... read more