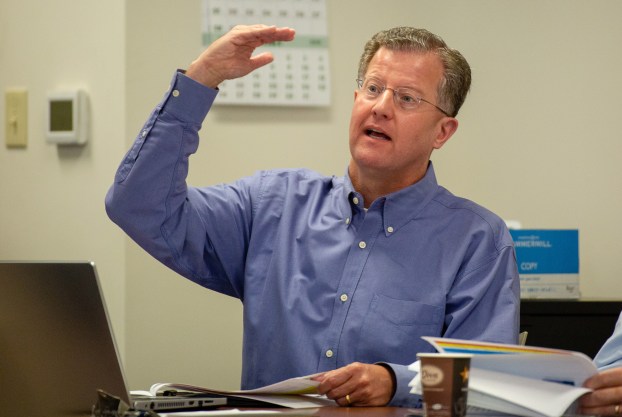 There have been 58 ongoing or new economic development projects in Boyle County during the first three months of 2019, according to a “project funnel report” released by the Economic Development Partnership this month.

Of those 58 prospective businesses looking to build or expand, Boyle County met the qualifications of 53, meaning it has the resources such as land that would be needed. Of those 53, 32 made it to a “due diligence” phase when businesses continue to refine their plans; and seven have been announced.

“If you ever hear at cocktail parties or at local government meetings, ‘What is that fat cat doing down there at 105 East Main Street?’ This is where my time is invested,” said EDP President and CEO Jody Lassiter when he presented the project funnel report last week. “It’s probably 75 percent of what I do.”

Nelson said the main goal of the EDP is filling Boyle County’s jobs “pipeline” with prospective businesses, and then helping bring those projects to fruition.

The seven projects that were announced in January, February or March are:

• Project Admiral/NuBreed Academy LLC: an athletic training business that “offers basketball training in group and private settings, along with camps, clinics and elite travel teams, according to its Facebook page. The business was announced March 8 without a publicly specified level of investment or number of jobs.

• Air Hydro Power Inc.: The business signed a lease on Feb. 19 and intends to employ one to nine people, according to the funnel report.

• Project Cheer/Kentucky Cheer All Stars/Kentucky Athletics: The business has purchased a building at 106 W. Meigs Lane, Junction City, “and will expand at that location,” according to the funnel report. Investment level and number of jobs have not been publicly released.

• Whiskey Service LLC, also known as IJW Whiskey, was approved for construction of additional rickhouses at its Lebanon Road location on Feb. 27.

• Asuka Japanese Steakhouse: The Nicholasville restaurant announced in March it intends to open a second location on the south side of Danville. Investment level and number of jobs have not been publicly released.

• Bluegrass Sports Center: The project was announced April 1 and according to its Facebook page, will be “coming soon” in the fall. It will feature basketball courts, batting cages, a turf area, a party area and more. Investment level and number of jobs have not been publicly released.

• Hobart Corporation: This project is expected to employ 10-24 people at Hobart and require an investment of between $100,000 and $500,000. “Hiring and investment (are) underway,” according to the funnel report.

The funnel report also makes note of six ongoing projects that were already announced prior to 2019:

• McAfee Mowing and Landscaping has acquired property off of Stanford Road and intends to relocate and expand there. The expected level of investment is between $100,000 and $500,000.

• Project Newton/Adkev Inc. is moving into the former Caterpillar plant in the industrial park, bringing with it an estimated investment of between $11 million and $25 million, and between 51 and 100 jobs. Adkev “will begin operations in April 2019,” according to the funnel report.

• Project Angel/IJW Whiskey is the ongoing construction of rickhouses, with the possibility of a visitors center and distillery in the future. It’s estimated investment level is between $10 million and $25 million, and it’s expected to create between one and nine jobs.

• Project Delaware/Luca Mariano Distillery was announced in August 2018. Plans call for tens of millions of investment in building a visitors center, a distillery, rickhouses and perhaps other amenities such as lodging, according to owner Francesco Viola.

• Hill-n-Dale Apartments: A renovation of an apartment complex requiring between $1 million and $5 million of investment is now complete, according to the funnel report.

Other notable projects in the “due diligence” phase include:

• a bed and breakfast project in Perryville that could create between one and nine jobs and an investment of less than $100,000; and

• Project Eclipse, an expansion of an existing industry in Danville that could create 25-49 jobs and require an investment of between $5 million and $10 million.

One notable project not yet in the due diligence phase is a possible new industry looking at Danville. The initial inquiry about the project was made on Dec. 19 and the project doesn’t yet have a code name, but Boyle County met its qualifications to be considered. If realized, it would create between 50 and 99 jobs and require an investment of between $10 million and $25 million, according to the funnel report.

There have been three investors interested in taking advantage of Danville’s “opportunity zone” — a federally designated area mainly focused on the center of the city, inside of which specific types of investors can gain tax breaks if they contribute to economic development projects.

One of those three has “opted not to pursue investment,” but the other two are ongoing possibilities, according to the funnel report. One is in the “qualified” phase; the other is in “due diligence.” The report does not list potential jobs or investment levels for either.

Lassiter has said previously that one potential opportunity zone investor wants Danville to complete a master plan for development of its downtown area before it will invest.