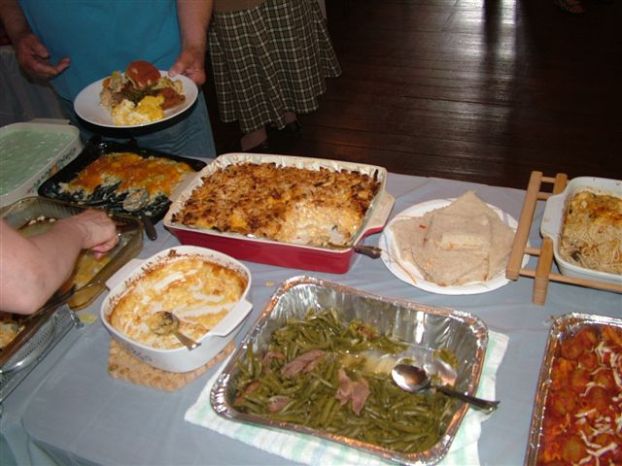 A spread of dishes during a previous tasting party. Photo contributed

Historical Society in Harrodsburg brings back Tasting Party May 6

HARRODSBURG — For the 29th year in a row, the annual Tasting Party returns to Harrodsburg, benefitting the Harrodsburg Historical Society.

“The Tasting Party is unique in that there is no set menu,” said Marian Bauer, a society member. There are different dishes from year to year, as members and friends of the Harrodsburg Historical Society provide the items. 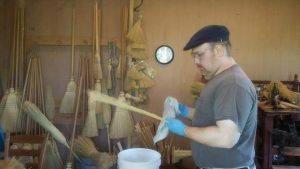 Broom maker Philip McIntosh will have items for sale during this year’s tasting party. Photo contributed

Bauer said, “We do have some local restaurants contribute some of their traditional delicious food, which is an additional benefit, such as Lee’s chicken, potato salad from Kentucky Fudge Co. and coleslaw from The Olde Bus Station, to name a few.”

The event is the biggest money-maker for the Historical Society, along with its annual homes tour. The money goes toward the continued maintenance and preservation of Morgan Row.

Bauer said it’s important to maintain the unique buildings, located in the oldest settlement of Kentucky. Keeping the historical attributes of the area top-notch and looking nice helps with tourism, for example, she said.

“The society works to do that with the help of the community.”

This year, the society will sell brooms made by Philip McIntosh, a Kentucky native who moved to Mercer County in 2003 to help run a B&B farm with his family. McIntosh worked for Shaker Village of Pleasant Hill as a demonstrator for 10 years making brooms and oval boxes. Items available will be full size brooms, cob web brooms, hearth brooms, pot scrubbers, cake testers, Turkey wing and hawk tail whisk brooms.

Although the Tasting Party has been in effect for almost three decades, it did start a newer offering a couple of years ago — the brunch-lunch. 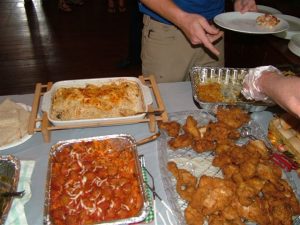 A spread of dishes during a previous tasting party. Photo contributed

“By starting the event earlier to accommodate more patrons, we added breakfast items, like quiches and breakfast casseroles,” Bauer said. “Thus, the name ‘Tasting Party’ gives patrons an opportunity to take a spoonful of a variety of foods to fill their plates.”

And still, the cost is only $6 to do that, which includes a beverage. Desserts are extra.

The event began in 1991, to feature dishes from recipes from “A Taste of Harrodsburg” cookbook, which was published last year. “A spoonful of each dish was placed on patrons’ plates, and the cost was added up per item,” Bauer said. “We went to a set price, instead, a few after that, which includes a drink choice between tea, lemonade or coffee.”  “A Taste of Harrodsburg,” published in 1991.

No reservations are necessary, but Bauer says dishes — which are made and donated by volunteers — can go quickly.